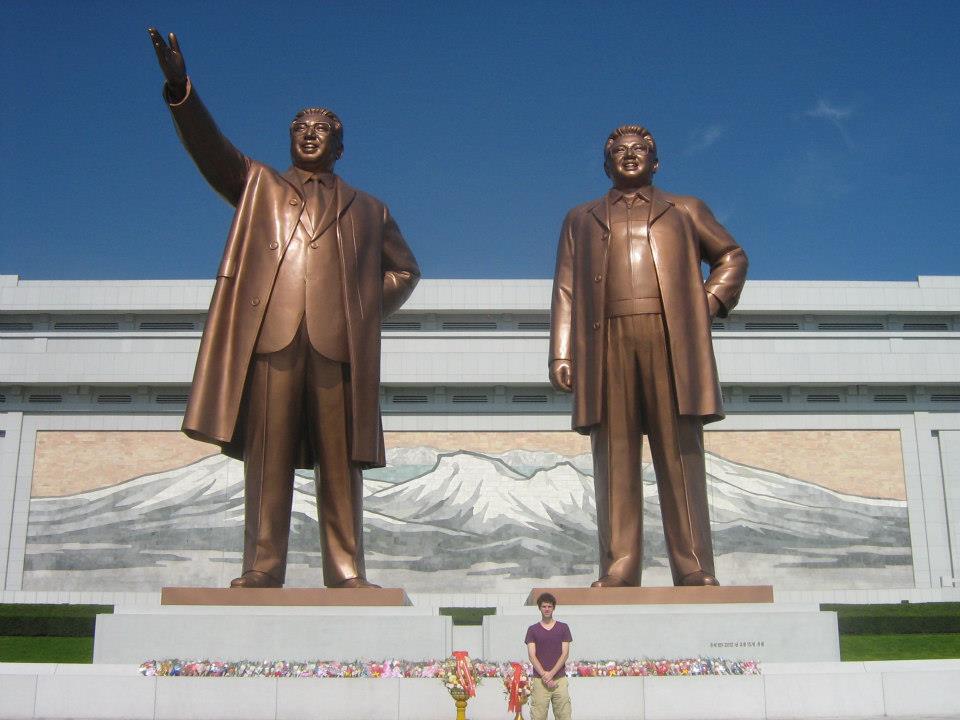 Benjamin Young had a rare chance to visit North Korea in 2012. He stands with statues of statues of country leaders Kim Il-Sung on the left and Kim Jong-Il on the right.

North Korea doesn’t usually top the travel destination list for most graduate students. But Benjamin Young’s trajectory was anything but typical, and after completing a bachelor’s degree in history, he joined a trip organized by a Canadian organization to northeastern China’s Korean-speaking region and North Korea, where he fastidiously practiced his Korean dialogue.

“Looking back, I can’t believe my parents let me do that,” Young said. But a lack of scholarly expertise about the country had piqued his interest. His trips led him to seek his own academic answers, completing master's and doctoral programs in North Korean history and studying as a Fulbright scholar.

“North Korea is certainly a unique country,” said Young, now an assistant professor of homeland security and emergency preparedness at the Virginia Commonwealth University L. Douglas Wilder School of Government and Public Affairs. “It is definitely a black box in many ways. It also can be a Rorschach test. You see in it what you want to see.”

Investigating a mountain of mystery

Understanding North Korea is a challenge Young takes pride in, and he’s become an expert on the country, speaking to national and international news outlets – and gathering information any way he can; from defectors, historical archival materials, as well as people traveling there. He recently published his first book, “Guns, Guerillas and the Great Leader,” which examines North Korea’s foreign relations with developing nations during the Cold War era.

Young sees the past as critical to understanding the present. He specializes in international relations and Cold War studies and is researching the importance of mountains in North Korean ideology, especially that of Mount Baekdu, which serves as an important political metaphor. Long viewed as a symbol of strength and longevity, the mountain forms the basis of a cultural ritual of power. Before an important missile test, North Korea’s leader, Kim Jong Un, typically visits Mount Baekdu, said to be the spiritual birthplace of the Korean people.

The state-controlled media then releases photos of him, majestic atop a white horse, riding among the snow-capped slopes. Connecting North Korea’s proud history to its present, the significance of this act solicits the leader’s confidence in his people, who are taught to view Kim as a god incarnate. It’s a powerful display to behold and serves as a reminder of the purported greatness of North Korea, Young said.

“North Korea is a country that blends Marxism-Leninism, Korean nationalism, and militarism into an ideological mix that has made the government extremely brutal and the country resilient to external pressures,” Young said. “Nationalistic symbols, such as Mount Baekdu, play an important role in North Korea’s political culture and internal affairs.”

What kind of threat is North Korea?

It’s nearly impossible to talk about North Korea without reflecting on the militant power of the nation, which spends 20% to 30% of its gross domestic product on national defense. This stands in contrast to the 10% to 20% of its nonhighway roads that are paved. Fierce independence and the desire for self-reliance have trumped economic prosperity, Young said.

North Korea has devoted decades to developing its nuclear program, conducting its first nuclear test in 2006 and its latest and most powerful test in 2017. According to the state-controlled media, that test included a long-range hypersonic missile, which experts believe could potentially evade U.S. detection in the event of an intercontinental launch. Despite warnings of increased economic sanctions from the international community, Kim has pledged to continue to expand his nuclear arsenal and advanced weapons programs.

While President Donald Trump talked with Kim, and even traveled to meet him in the Demilitarized Zone in 2019 to discuss nuclear de-escalation, Young said President Joe Biden is taking more of a stand-by approach.

“North Korea presents a unique security challenge to the U.S and its regional allies in Northeast Asia,” Young said. “With its nuclear weapons, cyber operations and missile systems, North Korea’s asymmetric military capabilities should not be underestimated.”

Another example of international conflict Young has investigated is the assassination of Kim's half-brother Kim Jong-nam in Malaysia by North Korean agents. Young was interviewed for a recent iHeart Podcast entitled Big Brother: North Korea’s Forgotten Prince which explores the murder-for-hire plot that eliminated the rightful heir and leader of North Korea. 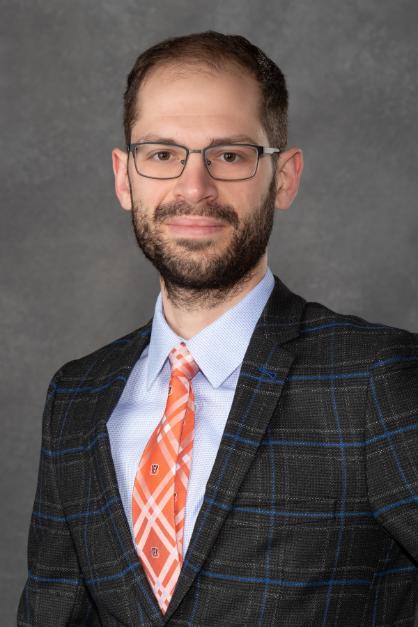 "With its nuclear weapons, cyber operations and missile systems, North Korea’s asymmetric military capabilities should not be underestimated." - Benjamin Young

Next spring, Young will teach an elective course on China and North Korea. Tentatively titled “Maoists and Missiles,” the class will be a survey of security issues surrounding the two countries. In his other classes, such as terrorism, cybersecurity policy, and legal issues in homeland security and emergency preparedness, Young uses North Korea as a way to talk about state sponsors of terrorism and the use of sanctions in U.S foreign policy.

When Young discusses North Korea with his students, he works to dispel misconceptions about the country. Young notes the importance of recognizing that North Korea has remained unique from other Communist countries.

“It wasn't like the Soviet system and was never like the Chinese system,” Young said. “A lot of students tend to think of North Korea as just a pawn of the Chinese leadership. And that is not at all true.”

Young views the relationship between North Korea and China as one of long-term mutual convenience, with both countries having supported each other’s revolutionary ideologies during their respective civil wars in the middle of the 20th century. Aside from ideological solidarity, North Korea and China also share an interest in limiting U.S. troop presence in the region.

So while North Korea operates politically independent of China, there are connections that foster security concerns for the Western world. Young recently published an analysis in the magazine Foreign Policy, titled “North Korea Knows How Important Its Cyberattacks Are.”

“Many North Korean hackers get their education in China’s tech universities and then bring back their skills to their homeland,” Young said.

The technological resources China provides are of benefit to North Korea’s modernizing economy. According to 2016 South Korean research, at least 600 to 1,000 North Korean cyberwarfare agents operate in China. And most, if not all, internet traffic in North Korea runs through China, Young said. His assessment is that not only does China knowingly support North Korean cyberwarfare efforts, but it advances these efforts “as a proxy force to weaken and frustrate U.S. interests.”

Young’s forthcoming special topics course on China and North Korea is something he’s excited to share with the Wilder School’s homeland security and emergency preparedness students. While cyberwarfare draws less attention than missile launches, Young is convinced that raising public awareness on cyber operations is key for the U.S. in effectively assessing the full threat profile of North Korea.

North Korea serves as a case study for students to evaluate and develop innovative solutions to thwart modern-day terrorism. It’s a skill set Young sees as essential to combat the evolving types of security threats and best prepare students for successful careers in homeland security and emergency preparedness.

“North Korea’s hackers are the 21st-century version of guerrilla fighters, moving in the dark and striking at the most vulnerable points,” Young said.