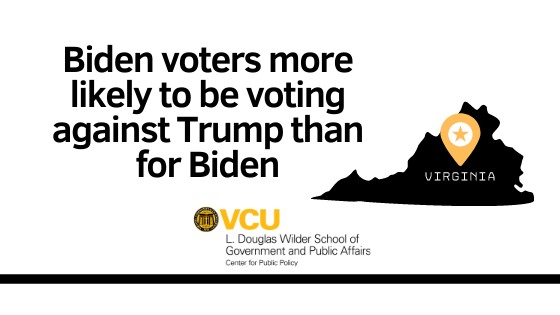 While Democrat Joe Biden remains ahead by double digits in Virginia, his voters are more likely to see the choice as a vote against President Donald Trump than a vote for Biden, according to a new statewide poll conducted by the Center for Public Policy at the L. Douglas Wilder School of Government and Public Affairs at Virginia Commonwealth University.

RICHMOND, Va. (Oct. 29, 2020) — While Democrat Joe Biden remains ahead by double digits in Virginia, his voters are more likely to see the choice as a vote against President Donald Trump than a vote for Biden, according to a new statewide poll conducted by the Center for Public Policy at the L. Douglas Wilder School of Government and Public Affairs at Virginia Commonwealth University.

Democrats Biden and Sen. Mark Warner maintain their double-digit leads in Virginia heading into the final days of the election. Biden is ahead of Trump by 12 percentage 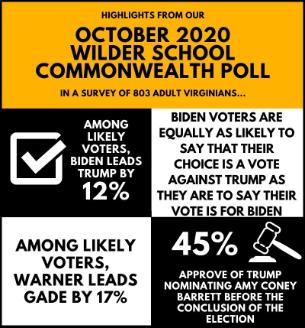 points (51% to 39%) and Warner is ahead of Republican Daniel Gade by 17 points (55% to 38%). These numbers are largely unchanged from polls released in September and July by the Wilder School. Gender and region remain significant to the vote choice for both races. Minorities continue to show strong support for Biden and Warner with more than 7-in-10 supporting the Democrats.

In the U.S. Senate contest, gender and region follow the same trend as the presidential race. And Warner enjoys a greater level of support from independents, with a 19 percentage point lead over Gade (54%-35%).

The poll also provides additional insight into Virginians’ opinions on the Amy Coney Barrett nomination and Trump’s handling of COVID-19.

“Virginia voters are reflecting a trend towards Biden and the Democrats. This seems to be more of a vote against Trump, than a vote for Biden,” said L. Douglas Wilder, the 66th governor of Virginia.

“Our polling across 2020 appears to reaffirm the shift we have seen over the past 12 years in Virginia — that the commonwealth is less a purple state and becoming a solidly blue state,” said Farrah Stone, Ph.D., director of the Commonwealth Poll at the Wilder School. “Still, voters for Trump are very much supportive of the president, while Biden voters are just as likely to support their candidate as they are to be anti-Trump. There is certainly a question of whether the likely Virginia voter supports Democratic policy as much as the Democratic alternative in this race.”

The Wilder School Commonwealth Poll is a featured 2020 Presidential Election Poll by CNN, approved based on a rigorous review of methodologies and assumptions that ensure that CNN-cited polling entities are employing the gold standard in public opinion research. This is the fourth and final presidential poll in 2020 for the Wilder School.

The poll, a telephone survey of 803 adults living in Virginia was conducted between Oct. 13-22. It has an estimated margin of error of 4.87 percentage points for all adults sampled, and 4.93 percentage points for likely voters. The entire report with detailed analysis tables and graphics can be found at https://oppo.vcu.edu/policy-poll/.