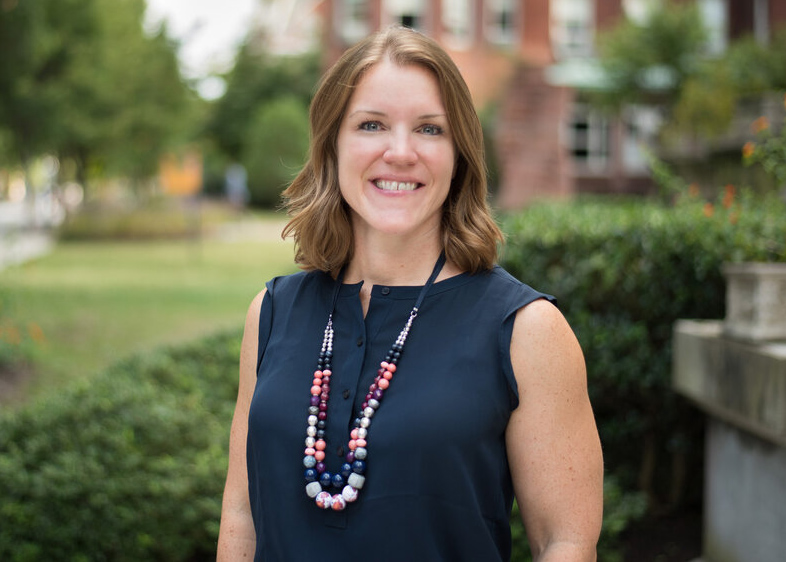 Leah Fremouw (B.A.’08/H&S M.P.A.’10/GPA) is the inaugural CEO of Bridging Virginia, a financial services institution that drives capital and resources into historically marginalized and underserved business owners in the metropolitan Richmond area. It’s a high-octane, purpose-driven role for the West Virginia native.

Perhaps that’s why she’s made a career of tackling startup roles and initiatives in organizations as diverse as CarLotz, Virginia Community Capital, TEDxRVA, and Impact 100 Richmond.

Earlier this month, she embarked on her boldest move yet as the CEO of Bridging Virginia.

Bridging Virginia is an emerging community development financial services institution (CDFI) that specializes in providing qualifying small businesses in the metropolitan Richmond area with low-interest, long-dated loans as well as other capital and services.

The organization began in 2020 as an effort to provide financial services to Black-, women- and minority-owned small businesses that had been disproportionately hurt by the coronavirus pandemic.

“Bridging Virginia works to address longstanding disinvestment by investing in people and communities that have been left behind by mainstream finance,” said Fremouw.

“The national call for economic justice which has become louder and more pronounced by the pandemic than ever has made our work, and the work of all CDFIs, more salient than ever.”

Fremouw assumes the helm of Bridging Virginia following a highly successful tenure as the senior vice president and director of innovation at the region’s behemoth CDFI, Virginia Community Capital.  Established in 2006 with a $15 million seed investment from then-Gov. Mark R. Warner, VCC managed over $486 million in assets and drove an estimated $1.8 billion in economic impact in the Commonwealth in 2021.

“Facilitating change in this industry is hard work. When we set a goal as bold as transforming a community, the expectations from funders and partners can sometimes be immediate,” –Leah Fremouw (B.A.’08/H&S; M.P.A.’10/GPA)

At VCC, Fremouw’s responsibilities included leading a lean but mighty team of experts delivering specialized financial and technical assistance to individuals, organizations, and nonprofits in a highly entrepreneurial role.

Despite the financial hiccups posed by a global pandemic, her last two years at VCC were perhaps her finest. Between 2020-22, Fremouw led efforts to funnel critical economic recovery support to COVID-impacted businesses and communities, both within and outside of the territory VCC serves. Those efforts included leading the relaunch of the Capital Region Small Business Development Center and co-authorship of a proposal resulting in a $10 million budget amendment tapping the Virginia Department of Housing and Community Development (DHCD) to administer the funds. In addition to enabling Virginia CDFIs to support communities and businesses across the Commonwealth,  the amendment motivated a majority of Virginia-based CDFIs to organize, form a coalition, and establish a collective voice for the community development and investment community. She is optimistic that the Virginia CDFI Coalition will be incorporated as a non-profit this year.

Fremouw’s immediate plans for Bridging Virginia include expanding the organization’s services beyond collateral enhancements to include direct lending of up to $50,000 to small business owners in the early phases of business development. She also hopes to add real estate financing to Bridging Virginia’s suite of services and to expand its clientele to include burgeoning industries in the region.

Then, of course, there’s the prospect of staffing. As Bridging Virginia’s first full-time employee, Fremouw will have the opportunity to leave her imprimatur on virtually every aspect of the organization.

It’s the perfect opportunity for a self-described “builder” who has fully embraced the CDFI industry and her unique role as a community leader within it.

“Facilitating change in this industry is hard work. When we set a goal as bold as transforming a community, the expectations from funders and partners can sometimes be immediate,” she said.

“Sometimes, the challenge is in adjusting expectations and in helping the partners to understand that in the same way that when an industry like coal leaves a region and the economic forecast worsens gradually, progress is likewise incremental.”

“At Bridging Virginia, we intend to support the RVA community in taking intentional, consistent steps in certain paths and, and around certain goals.”

She counsels that many factors must align to make a community investment successful, and the most important of these is consistency in focus and action.