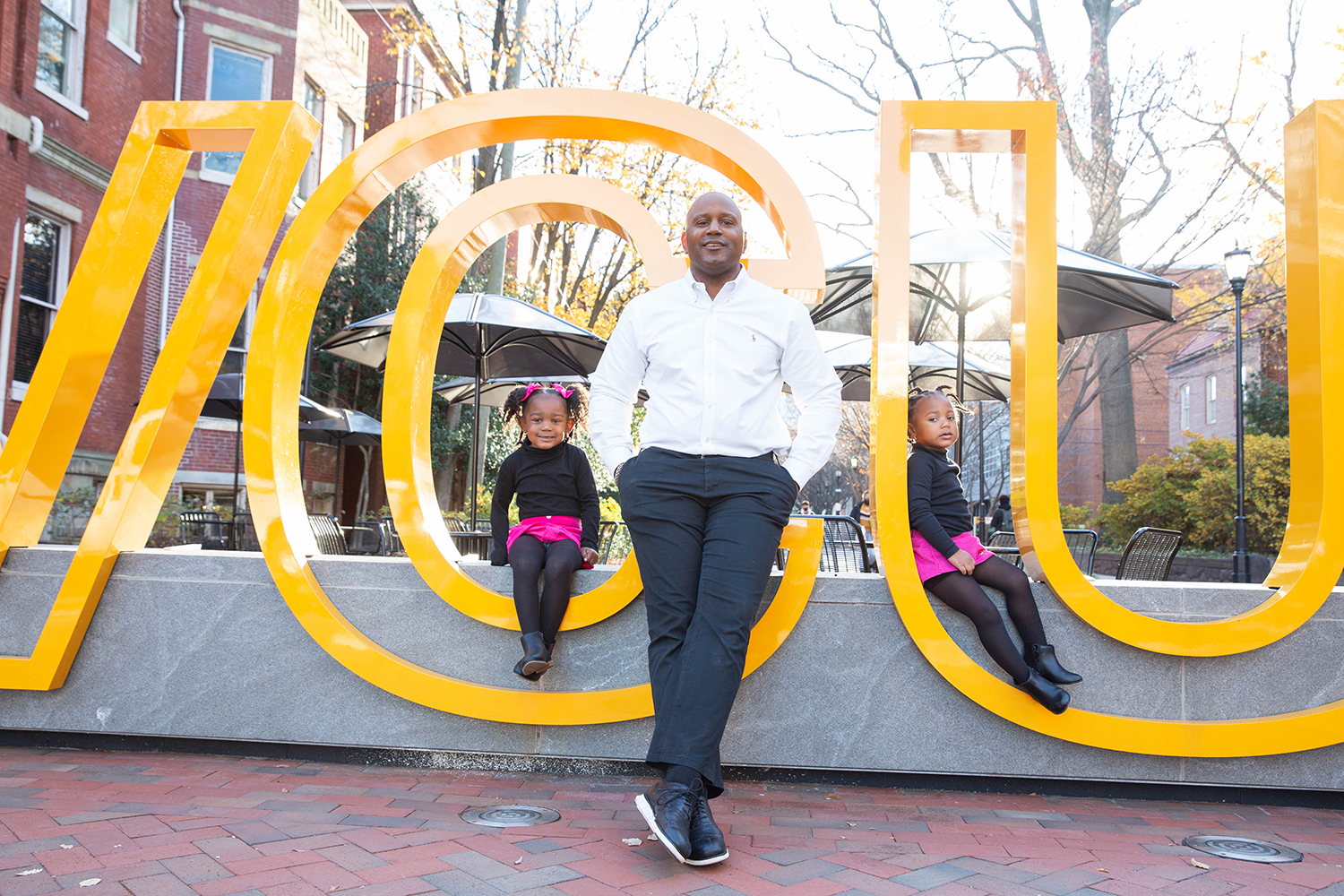 “I have never told my children to choose a career path,” LeQuan Hylton (Ph.D.’16/GPA) said beaming into one of what appeared to be several screens lining the desk in his handsomely appointed office.

“My daughter wants to be a police officer, a witch, a teacher, and an architect and I tell her every day that she can be all four. I tell them as my parents told me, “We live in an ‘and’ world not an ‘either/or’ world.

Hylton, a proud husband, and father of two who knows a thing or two about the benefits of a career that defies conformity. He is a Ph.D., an activist, a real-estate broker, developer, builder, and a highly-skilled reservist who has managed to be successful at nearly each of these pursuits simultaneously.  He credits his success in multiple areas to the mindset of his parents telling him that he can be all that he wanted to be, similar to him telling his daughters that they can be all the things they want to be.  It is interesting to note that Hylton is the third generation in real estate development and construction.  There was his grandfather, his dad, a few uncles, and two brothers that did real estate and construction before him.  “It is in my DNA,” laughs Hylton.

At age 39, he is the co-founder (his mother, Sharon Hylton is the other co-founder), president, and principal broker of Hylton & Company, a lean but thriving family operation that offers high-quality affordable housing for those in the Richmond, Tidewater, and Northern Virginia areas. Hylton runs the company alongside his wife, Nelda, and mom, Sharon.

In an industry seemingly obsessed with meeting the needs of those in high and middle incomes, Hylton has amassed a real estate portfolio of nearly 300 single-family homes, multi-family homes, and commercial properties by focusing on those at the other end of the economic strata.

During the pandemic, Hylton & Co. doubled down on this commitment, converting brand new housing and newly rehabbed units for the homeless and those at-risk of homelessness through network partnerships with local agencies.

That Hylton has built this particular enterprise while maintaining superlative tenant ratings has made the Martinsville, Va., native something of an exemplar. His success, humility, and family-first persona earned him several glowing profiles and a “10 under 10” distinction from Virginia Commonwealth University. But it is more than just the breadth of his success that has helped him garner attention.

Hylton has a certain pluck that one hopes is contagious. Take, for example, the time he was rejected from undergraduate admission to Virginia State University.

“You may not realize this,” a 17-yr. old Hylton said on a call to a baffled admissions officer, “but I am exactly the type of student Virginia State was built to serve.”

Hylton charmed the caller into an invitation to campus and the visit would set off a chain of achievement that would ultimately lead to a degree in business management from VSU, an MBA from Averett University, and a doctorate in Public Policy and Administration from the VCU Wilder School.

“We build and rehab houses in the same fashion that we would live in ourselves. That’s what it’s all about. Our relationship with tenants is the same as our relationship with contractors and the same with investors. We’re all part of an ecosystem that requires that we invest our best.” -LeQuan Hylton (Ph.D.’16/GPA)

Building opportunities for others

Hylton brings that same fortitude to his work in affordable housing. He delights in rehabilitating formerly blighted properties and in incorporating unexpected finishes in his rentals such as walnut flooring and granite countertops.

“We build and rehab houses in the same fashion that we would live in ourselves,”  he said. “That’s what it’s all about. Our relationship with tenants is the same as our relationship with contractors and the same with investors. We’re all part of an ecosystem that requires that we invest our best.”

Hylton wants that sense of fair play and mutual enrichment to be at the core of every interaction undertaken by Hylton & Co. It’s why he strives for transparency in his communication with applicants who don’t qualify for tenancy with the firm and works to connect them with credible financial repair firms and a path toward tenancy in the future. He’s even rolling out a home assistance program for current residents in 2022. Hylton’s company launched a joint venture to offer first-time buyers with grant money for down payment assistance.

Homeownership, financial literacy, and access to capital, particularly within low-income and minority communities, are subjects about which Hylton is passionate.

He said those factors can act as “a fast pass” in realizing the potential of others like himself.

Through his service as a member of the Chesterfield Planning Commission and the Diversity and Inclusion Committee of the Virginia Realtors Association, Hylton hopes he can be a beacon to others in the industry.

He sees his work on the planning commission as particularly important.

“In my two years on the commission, I have only seen a handful of proposals for affordable housing projects despite high demand. Before my tenure is up, I would like to see more real estate development in this area. While it’s the role of the government to stimulate affordable housing, I see the industry and the academy as the greatest catalysts for the change that is needed. That’s why programs like the Master’s in Urban and Regional Studies program at the Wilder School are so important.”

Like the properties he constructs, Hylton sees affordable housing as a market rife with opportunities for those with the vision and drive to pursue them.

“There is both social and economic value in providing quality affordable housing to those who need it. That’s my ministry.”