Criminologist, Callie Rennison gets personal with insights on life in academia 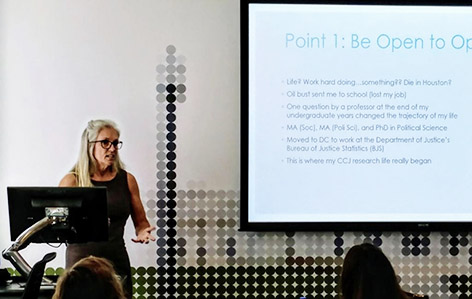 Author and criminologist, Callie Rennison, Ph.D., made it evident that there was no way to discuss her professional career and research path without reflecting on her personal life decisions. In her own words, they were interconnected.

Rennison shared twelve key insights on life in academia with students, faculty and alumni during the Wilder School’s Doctoral Lecture Series in Public Policy. Her talk “From Here to There, to Where? The Life Course of One Academic,” highlighted her journey from indecisive undergraduate to noted academician.

Rennison is a professor and the former associate dean of faculty affairs at University of Colorado Denver’s School of Public Affairs. Her research on violence against women, intimate partner violence, victimization and rape study cases is highly respected.

“I had seen graduate students, but I never knew I could go to graduate school.  I ended up getting two graduate degrees and a doctorate which is why I refer to myself as an accidental PhD student. I had no intention of ever doing any of it. The lesson learned is to be open to opportunities.”

Rennison also reflected on how answering basic questions is important. She explained how one of her greatest professional experiences was with her most cited piece of research which provided national estimates of intimate partner violence. According to her, it all steamed from a simple question.

“Sometimes I see students and faculty who think the questions that they need to address need to be these super complex questions, major questions. Those are fine, but sometimes the simplest questions are some of the most important.”

She expressed the need for giving yourself room to grow and encouraged students to read early literature, be innovative and return to the beginning when conducting research.

To illustrate this, she pointed to her own experience as a young scholar at the University of Missouri-St. Louis as an example. Rennison was examining “rape co-occurrence” when she discovered that the National Violence Against Women Survey and National Crime Victimization Survey results which first appeared to be in conflict, were producing statistically similar results upon closer examination. She said it was important that scholars understand the difference between research methodologies and how those differences can skew an unsuspecting scholar’s analysis.

“Methodology matters. You have to be critical consumers of information even as professors and graduate students to not just take face value that something is better and that the different methodology matters, so looking into it is very important. Measurements also matter.”

Rennison spoke candidly of several career altering decisions, including her resignation from a full-time position at the University of Missouri-St. Louis to Boulder, CO, which she made with no employment opportunity in place.

Her next point of advice was to “live where you love!” During the first nine months of her new move, she was given time to think about research she had pushed aside and soon found herself in a new position at the University for Denver Colorado.

Pivoting back to scholarship, Rennison stressed the importance of questioning commonly-used measures and the need for precise communication when sharing research findings.

She explained that this was particularly important in her work on college campus victimization which could be viewed as a deterrent for parents concerned about campus safety.

“I am thrilled that we are focusing on sexual violence and harassment against college students. It’s overdue, but one element of it troubles me and that is the way we are using words to describe it, said Rennison.

“If you would look at most of the research out there that is described as “campus victimization” it’s not campus victimization, it’s violence again college students that happens anywhere. Some surveys don’t even ask where it happened, and the few that do very often show that these incidents rarely occur on campus.”

Rennison encouraged students and faculty to consider applying a fresh approach to old topics and to write the book you want to read, sharing her new experience of publishing “Women Leading Change in Academia: Breaking the Glass Cliff, Ceiling and Slipper,” co-edited with Amy Bonomi, Ph.D.

The book includes contributions from women all over the country.

“This is me taking mentoring to another level. This book is for anyone who cares about higher education, regardless of different sets of orientation, race, ethnicity religion. It’s for people who want to do better in academia and want to open channels.”

Rennison closed her talk by urging students to do what you love and engage in self-care because there is no trophy for burnout.

She saved her last piece of advice for the current and emerging faculty in the room. “Researchers…we have one real task and that’s to make our scholarship policy relevant. We must become the policy makers.”