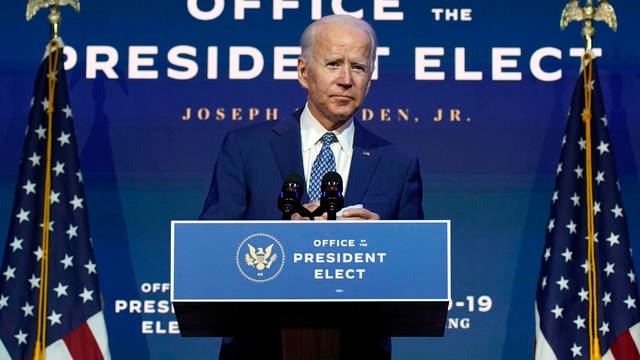 As a tumultuous 2020 Presidential election drew to a close, the Wilder School invited Dr. Bob Holsworth, a noted political analyst and founding director of both the Wilder School and the Center for Public Policy, to its Alumni Lunch and Learn on November 18. In a thoughtful and deliberate address, Holsworth shared his analysis of the results, its likely repercussions and a preview of the 2021 elections in Virginia.

“As far as I can see, the presidential election is certainly over and Donald Trump was defeated,” said Holsworth.

Holsworth acknowledged that while the votes had been tallied, the Trump campaign had and would likely continue to issue numerous lawsuits to overturn the results.

“The legal challenges are not going anywhere because his attorneys are not able to show the irregularities or problems with votes that could really turn around any of these elections,” he said.

Holsworth named a few factors that contributed to the defeat, allowing president-elect Joe Biden to rebuild a “blue wall” in Pennsylvania, Michigan and Wisconsin that expanded into Georgia and Arizona.

“Although Trump had a tremendous turnout in rural areas, Biden was able to increase the turnout from the past core lower cities.”

“The suburban defections that had been seen by Trump in 2018 continued, but what can be seen is that many of these suburban areas have had an increase in multiracial diversity which did not serve well for him this election.”

“Thirdly in blue states, Biden was able to cut into the Trump vote among work-class whites slightly, but overall those votes added up.”

Another highlight of the election was the long-term voter registration and mobilization efforts by Georgia politician Stacey Abrams that had a fairly dramatic effect on the votes in the suburbs.

There was also a significant change in Maricopa County, Arizona, among young Latinos who came out to vote in greater numbers against President Trump.

“Although this was the case, national results show that Trump did slightly better with African American males than in 2016 and with Latino voters in particular areas like South Florida and border areas of Texas,” said Holsworth.

In addition, Democrats were hoping to defeat Trump not only in the Presidential election and pick up majority of the seats in the Senate.

“Democrats have currently picked up one seat in the senate but were hoping for much more. It’s all going to come down two the two run offs in Georgia,” said Holsworth. “Republicans have done quite well in run offs and we’ll have to see if the Democrats have a strategy that will enable them to change that.”

In the Congressional races, Republicans picked up 6-10 seats, narrowing the majority that Speaker of the United States House of Representatives Nancy Pelosi has to operate.

“I think what happened in Virginia is that the state put a big exclamation point on the changes that have been occurring in the Commonwealth for the past 15 or 20 years,” said Holsworth.

Overall in stateside races, Republicans have only won one race since 2005. Joe Biden carried the state vote by 10 points and Mark Warner carried the Senate race by 12 points.

The challenge for Republicans is that Virginia is not predominately a rural state now, but rather an urban, metropolitan, suburban state and these districts and populations were heavily supporting Joe Biden.

“The suburban areas on the eastern parts of the state have gone heavily democratic over the years. That is a trend that we have been seeing and the Republicans have not been able to deal with that,” stated Holsworth.

Holsworth pointed out that the Republicans need to find a message that would connect with these populations and that the message of “draining the swamp in Washington” by President Trump has only exasperated the problems and helped to aid the Democrats.

“He [President Trump] drained northern Virginia of Republicans. In the General Assembly, there are currently no Republicans that represent Fairfax County, the largest metropolitan and jurisdiction in the state of Virginia,” said Holsworth.

Congressional elections have turned out to be status quo with both Elaine Luria and Abigail Spanberger both held their seats here in Virginia.

“I was not surprised that it passed easily, but I am a little surprised that majority of Democrats supported it this time around,” said Holsworth. “It’s almost unimaginable that the Republican party of VA or nationally would have done this if they still had the majority.”

What happened in the Richmond Mayoral race?

Current Richmond Mayor Levar Stoney defeated his opponents to remain in the elected seat as Mayor of Richmond, Virginia.

“I felt that Levar Stoney was a favorite. Certainly, nine months ago, he would have been a heavy favorite. And the question was if he was going to remain the favorite despite Navy Hill concerns and the social justice protests that occurred after the George Floyd killing,” said Holsworth.

Holsworth believed that his strongest challengers in the race were City Council woman, Kim Gray and Alexis Rodgers, a newcomer to Richmond politics that had become a progressive alternative to Mayor Stoney.

“It is certainly going to be a remarkable year for Virginia with about 35 or 36 people have announced that they are running or considering to run for statewide offices,” shared Holsworth.

According to Holsworth, the Republican candidates to look out for include Amanda Chase, member of the Virginia Senate for the 11th District, and Kirk Cox, former speaker of the House.

“The Democratic party will have to negotiate a path forward between their moderate, pro-business base and their progressive side, specifically in Northern Virginian,” said Holsworth.