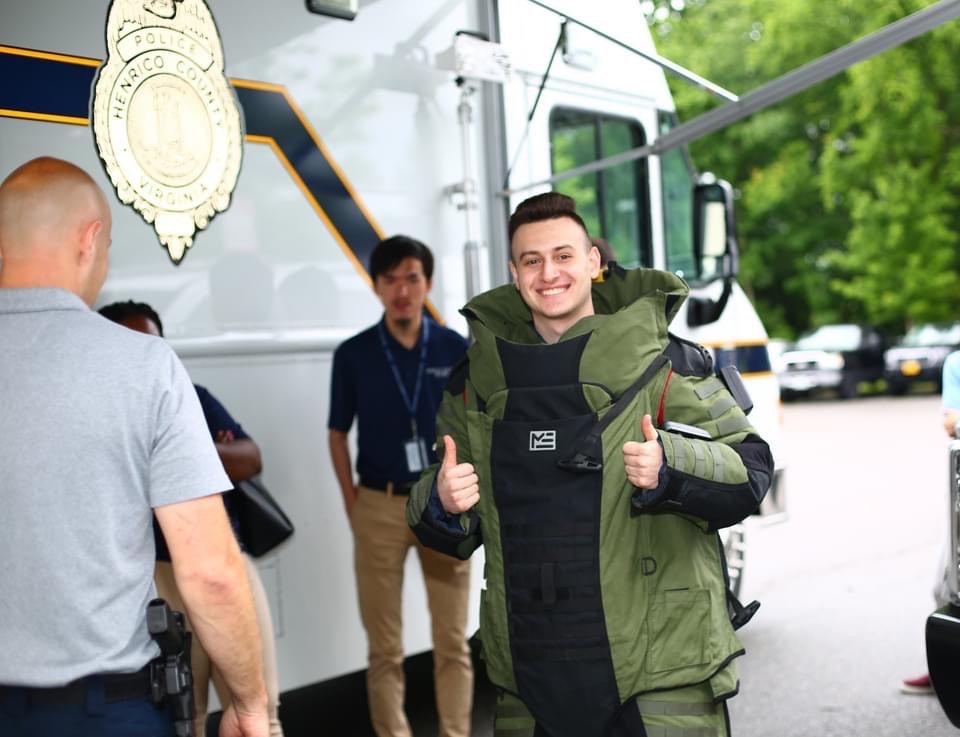 Internships with the Henrico County Division of Police, Virginia State Police and the U.S. Defense Intelligence Agency have prepared Hirsh to launch a career in intelligence.

Early on, Evan Hirsh knew he was cut out for a career in public service. Now concluding his final semester at the Wilder School, Hirsh’s plans are coming to fruition — but not in the way he initially imagined.

“I knew that I wanted to be involved in meaningful policy change and have an impact on American lives,” he said. “I was interested in the political process and following hot-button issues at the local, state and federal levels, but I started getting really burnt out. So I started thinking, ‘what can I do that's government-related, but not quite politics?’”

Hirsh found his answer during a visit to the Wilder School in his junior year of high school. He and his family traveled from Atlanta, Ga. and met with James Keck, professor of homeland security and emergency preparedness (HSEP).

“He gave me a brief rundown of the program, and I fell in love with it,” said Hirsh. “I knew immediately that it’s what I wanted to do and where I wanted to go.”

During his first semester in the HSEP program, Hirsh added a double major in political science with a concentration in human security. As he advanced into upper-level courses, his career path came into focus.

“I discovered I wanted to go down the track of the intelligence community,” said Hirsh. “I started trying to figure out where I would fit in and what would motivate me each and every day, and I started doing more intelligence analysis.”

Hirsh recently accepted a full-time position as an intelligence analyst with Booz Allen Hamilton that will begin upon graduation. A combination of internship experience, volunteer work and courses prepared him to take the leap.

“We did an assignment where we wrote a threat assessment about world security threats and I chose the Russian government's military expansion into the Arctic region,” he reflected. “I remember staying up really late writing the paper, but during that entire process, I found that I genuinely enjoyed what I did. I enjoyed the process of methodically pulling different pieces of information from different sources, of being able to come up with an intelligence product that I would be able to speak knowledgeably about — and that was where the switch went off.” 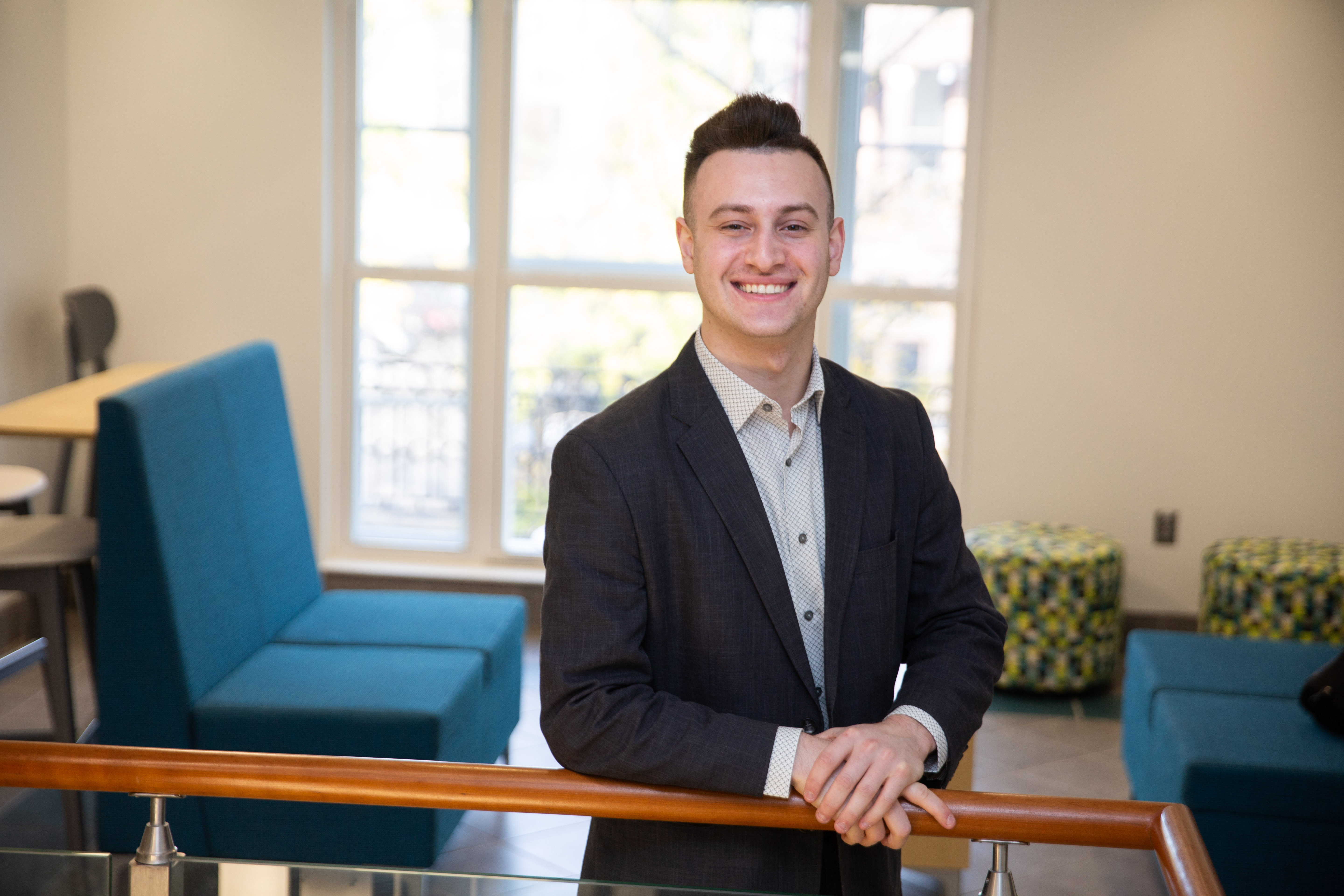 “It was through this internship that I met so many people that would have a real impact on where I could go in my career, and I still talk with them today,” he said. “They still have an interest in where I end up in life, which is really powerful. The networking opportunities and security clearance set me up for a successful interview with Booz Allen Hamilton.”

Professor Moslow-Benway described Hirsh as “one of the Wilder School’s brightest stars.” Selected as Wilder School’s Fall Commencement speaker, Hirsh’s exemplary academic record and tireless enthusiasm for the HSEP program will be showcased at the ceremony.

A class about terrorism and extremism led by Associate Professor David Webber was another experience that solidified Hirsh’s passion for the HSEP field. “Being able to learn from his expertise was priceless,” he said.

Adjunct Professor of HSEP, Larry Prokop, also played a key role in Hirsh’s career journey. “His course in intelligence ethics was one of my favorites,” he said. “Professor Prokop has a very impressive track record and resume. Learning from somebody who's done this for so long is really impactful, and the skills I learned in his course are going to stick with me throughout my career.”

Three internships allowed Hirsh to put his classroom experiences to the test. The first was with Henrico County's Division of Police in the summer of 2021. He was responsible for working alongside the records department, identifying fingerprints, transcribing fingerprint reports and preparing analysts to speak in court cases.

Soon after, Hirsh started as an intern with the Virginia State Police. He still holds this position today. Under the guidance of Wilder School criminal justice graduate Thomas Kohlbeck (B.S., ’08, B.A., ’08), he assists the Unsolved Violent Crimes and Cold Cases Unit.

“We are essentially intel analysts that provide research and analysis on different threats across the State of Virginia,” Hirsh explained. “I've worked on multiple cold case homicide investigations conducting research and using investigative and analytical skills. I’ve dug into instances of terrorism, political extremism, sex crimes, human trafficking, cybersecurity threats and more. It was through this internship that I really started to get a handle on what it means to be an intel analyst. If I didn't have that opportunity, I would be a lost puppy right now.”

Hirsh was also selected as an intern with the Defense Intelligence Agency in 2022.

“It was through this internship that I met so many people that would have a real impact on where I could go in my career, and I still talk with them today,” he said. “They still have an interest in where I end up in life, which is really powerful. The networking opportunities and security clearance set me up for a successful interview with Booz Allen Hamilton.”

Hirsh has also served as President, Vice President and Historian of Eta Lambda Sigma, the professional fraternity for the HSEP program.

With an emphasis on community service at the forefront of his work, Hirsh is rapidly building his career as a dedicated public servant.

“Richmond and VCU do so much for us, so why don't I return the favor? I try to give back in any way that I can.”