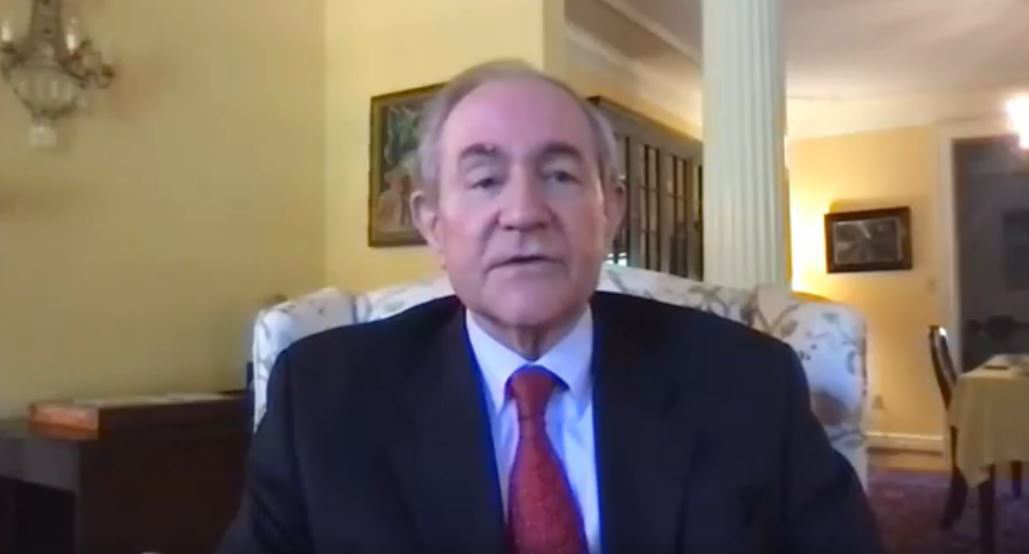 James Gilmore, the former U.S. ambassador and leader of the Gilmore Commission, says the country is better prepared to handle threats, but also warns of dangers posed by cyberattacks and misinformation.

As the morning of Sept. 11, 2001, unfolded before his eyes, James Gilmore, then the governor of Virginia, realized, along with the rest of the nation, that the World Trade Center was under terrorist attack. The situation grew worse when a plane crashed into the Pentagon, a direct strike on commonwealth soil.

Gilmore, today a former United States ambassador for the Organization for Security and Co-operation in Europe, reflected on his reactions through that unprecedented time on Oct. 20 at a virtual Lunch and Learn Series event hosted by the L. Douglas Wilder School of Government and Public Affairs. His presentation, “20 Years after 9/11 -- Are We Safe?” looked back at the U.S. response to the terrorist attacks and included Gilmore’s concerns regarding new threats to our future.

In 1998, during his first year as Virginia governor, Gilmore was approached by the Department of Defense and the White House to lead a national commission on terrorism, known popularly today as the Gilmore Commission. The commission’s reports, published by the RAND Corp., are foundational documents of U.S. counterterrorism and homeland security policy that set the stage for the creation of many federal agencies, according to Will Pelfrey, Ph.D., a professor of homeland security and emergency preparedness at the Wilder School.

The commission included medical and first responders, members of the intelligence community, politicians, firefighters and law enforcement. It included Ray Downey Sr., a firefighter killed in the World Trade Center attacks, to whom Gilmore paid respect during his Oct. 20 presentation.

Many levels of terrorist attack were identified by the commission, as were contingency plans to activate responses at state and local levels. In addition to conventional warfare and nuclear proliferation, the group also explored the likelihood of infrastructure and biological attacks.

“Are we safe 20 years after 2001?” Gilmore asked at the Wilder event. “The answer is, of course we're not safe. Of course not. We are, however, safer. There’s no doubt about that. We are safer because of the enormous investments and structures and money that have gone into making the American people and other countries safer.”

“Are we safe 20 years after 2001?” Gilmore asked at the Wilder event. “The answer is, of course we're not safe. Of course not. We are, however, safer. There’s no doubt about that. We are safer because of the enormous investments and structures and money that have gone into making the American people and other countries safer.”

The foundations of terrorism

Terrorism, Gilmore said at the Wilder event, “is simply an instrument” designed to destabilize the legitimacy of a nation-state. He described the 9/11 attacks as a deliberately asymmetrical approach that took very little to carry out, but requires a tremendous amount of resources to prevent. This is especially dangerous in a free and connected society, where confusion, fear and panic can destabilize us not only physically, but emotionally and psychologically.

Gilmore emphasized the vulnerability that such connectedness provided on 9/11, one compounded by the far-reaching impacts of media after the attacks.

“The goal [of the attack] is to reach into the minds of the target population, and to make them fearful, and then to make them react, possibly in a negative way,” Gilmore said. “The American people and our Western allies were totally terrorized, so as a result, [the terrorists’] goal was to create a reaction, and they got it.”

Gilmore said there are many levels of attacks, from domestic and international rogue actors to nongovernmental groups and even nation-states. He said the best preparation to fight terrorism is to cultivate an attitude of mental preparedness that requires accepting a certain level of risk while also allowing us to maintain our freedoms and values.

Terrorist enemies would like nothing more than to force the United States to abandon law and order and rely on the military in case of a nationwide terrorist disaster, Gilmore said. He said a response like that would be ideologically crippling to the United States. Averting such outcomes requires skillful and deliberate emergency responses from state and local officials, who would be able to more effectively mobilize than federal responses, especially to a decentralized attack.

Gilmore said Russia, China, North Korea and Iran pose nation-state level threats that the U.S. and its allies should be wary of. Russia’s expansionist policies in Ukraine and China’s in Taiwan are aggression flashpoints that could lead to international conflict, he said. Gilmore also believes North Korea and Iran will continue to pursue steps to develop nuclear weapons.

While precipitous, these conventional tactics aren’t the only concerns. Illustrating technology-based terrorism, Gilmore outlined a scenario in which communications networks went down.

“What would we do as a society, if all of our interconnectedness was cut off?” he asked. “Everybody looking at me right now has a cellphone in your pocket. What if it didn't work right now? Right now, it was cut off?”

He said cyberattacks are one of many potential scenarios that wouldn’t require conventional terrorist violence, but would still cause massive damage and destabilization. Another threat, which is more ideological than physical, comes from the way we process information. Gilmore said the growth of media influence and misinformation are threats that fundamentally alter how the free public responds to crises. Our freedoms challenge our responses to terrorism in ways that authoritarian societies don’t experience. But it’s our freedoms that give us power to change, he said.