Hezha Barzani, a VCU senior, has a unique perspective on the Afghanistan withdrawal 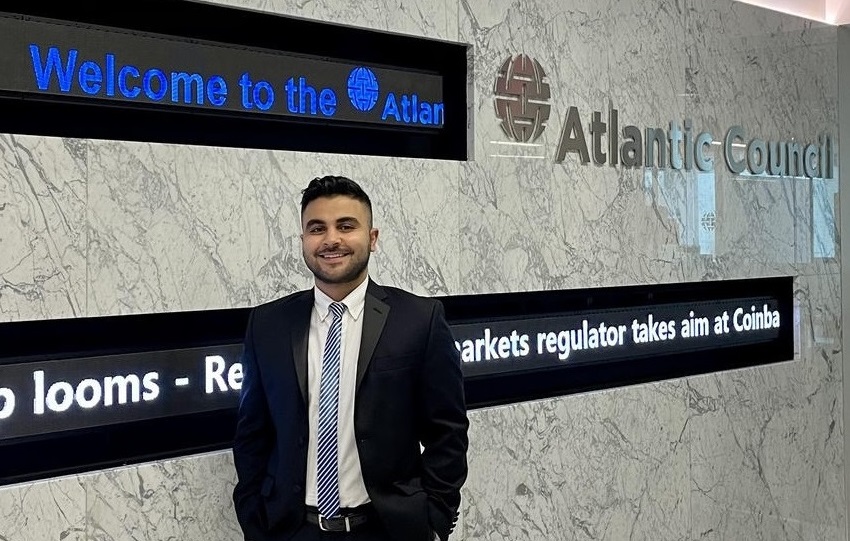 Hezha Barzani stands outside of his office at the Atlantic Council in Washington.

Hezha Barzani’s perspective on the United States’ recent withdrawal from Afghanistan is shaped by his own family’s flee from the Kurdistan region of Iraq in 1996. His father was a translator for nongovernmental organizations affiliated with the U.S. and coalition forces in the region. During a civil war, his occupation placed the family in danger, Barzani said, as Kurds hired by the American-led coalition forces and nongovernmental organizations “were actively pursued and killed.”

Barzani’s family was able to escape through Operation Pacific Haven, a U.S. Air Force operation during the administration of President Bill Clinton that saved nearly 7,000 Kurds. The voluntary evacuation transported refugees to Andersen Air Force Base in Guam before they found a new home in the U.S. or another host nation.

“My parents wanted to ensure my siblings and I had a better upbringing than they had,” said Barzani, a senior at Virginia Commonwealth University who is double majoring in political science with a concentration in international relations in the College of Humanities and Sciences and homeland security and emergency preparedness in the L. Douglas Wilder School of Government and Public Affairs.

“Watching the tragic events unfolding in Afghanistan, I couldn’t help but think of my family’s own story,” he said. “If it weren’t for Operation Pacific Haven, I would not be here right now. I know that kids my age in the Kurdistan region of Iraq would do anything to be here. That’s what motivates me.”

Furthering his interest in politics

Barzani grew up in Herndon, Virginia, and his interest in politics was piqued in high school. He chose VCU because of its rich diversity, he said.

After starting at VCU as a science-based major, he switched to political science in the spring of his freshman year.

“I wanted to be in a major that I would be interested in, something I would want to pursue. I had the full support of my parents,” he said, adding that he and his four siblings are eternally grateful to their parents. “They worked two to three jobs all of their lives to help us go to college. It was a huge scope of sacrifice.”

At VCU, Barzani served as a vice president in the Model United Nations during his sophomore year, as a Student Government Association senator in 2020 and now is a student ambassador for the Wilder School.

“I love politics. I’m really interested in human security, refugees and human rights,” he said. “The advice I give to incoming students is to look at what you love to do and what you want to spend your life doing.”

Sharing his thoughts on Afghanistan

In addition to his classes at VCU, Barzani works full time as a program assistant with the Atlantic Council’s Middle East programs. Headquartered in Washington, the Atlantic Council is a nonpartisan organization that helps shape solutions to global challenges.

When Barzani read about and saw images of the U.S. withdrawal from Afghanistan in August, he felt compelled to write his family’s story for the council’s blog.

“I wanted to share my family’s story when I saw a similar situation in Afghanistan,” he said. “There is a human aspect to it that sometimes politicians wouldn’t understand.”

Many of the refugees left in Afghanistan were translators like his father was in Iraq, and Barzani wanted to help through his writing. His post got the attention of at least one powerful person when it was tweeted by U.S. Rep. Ted Lieu, who served in Operation Pacific Haven. The tweet got 658 retweets and 2,100 likes.

“I am forever thankful that the Atlantic Council is so willing for people to share their stories,” Barzani said. “This blog post is personal to me. This could have real impact.”

‘The U.S. has the capability’

Barzani believes the withdrawal from Afghanistan should have been carried out with more organization.

“I think we should have started months earlier and the images we saw most likely wouldn’t have happened,” he said, adding that he recognizes the situation is very complex. “Even for someone studying in this field, there are aspects that I am not versed in. What is so dense is the different perspectives in the U.S., Europe and South Asia.”

In comparison to the Afghanistan withdrawal, Operation Pacific Haven was “swift and decisive,” he said. That operation was conducted in two phases. The first got the endangered Kurds to a safe area for screening before transport to Guam. The second included processing the refugees before they went to the U.S. or other host nations.

“The U.S. has the capability to do amazing things and they have done amazing things like Operation Pacific Haven. We have the opportunity to reapply this evacuation strategy on a larger scale in Afghanistan,” he said. “For me, I’m just grateful for how my family was saved.”