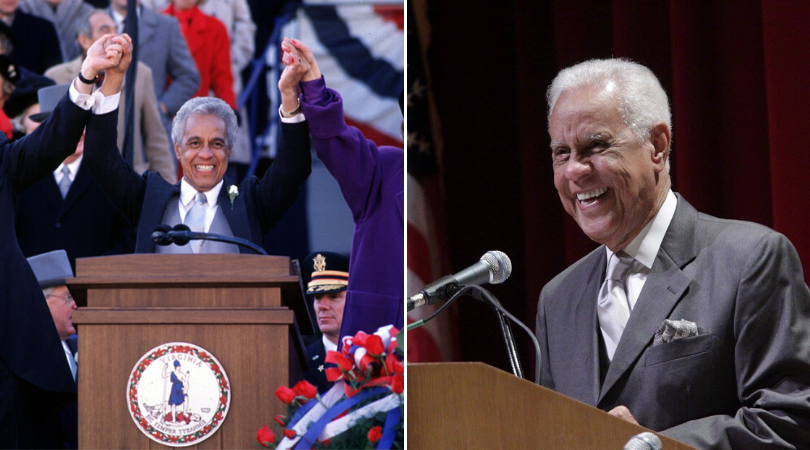 January 13, 2020 marks the 30th Anniversary of the inauguration of The Honorable L. Douglas Wilder, 66th Governor of the Commonwealth of Virginia.

The Wilder 30th Anniversary Event event has been POSTPONED and will be rescheduled for later this calendar year once the COVID-19 threat has passed.  Our first priority is the health and safety of all those involved in planning and attending this event.  Future updates about the event will be posted at vuu.edu and wilder.vcu.edu.

Virginia Union University (VUU) will host a day-long leadership symposium on Thursday, March 26 honoring the legacy of L. Douglas Wilder, 66th Governor of the Commonwealth of Virginia. This year marks the 30th Anniversary of Governor Wilder’s inauguration. The symposium, in partnership with Virginia Commonwealth University’s Wilder School of Government and Public Affairs, will be held in the Claude G. Perkins Living and Learning Center, 1500 N. Lombardy Street, Richmond, VA 23220 from 9:00 a.m. – 5:00 p.m. This event is open to the public. Registration is $25 per person and can be completed on line at http://bit.ly/2HyUP6h.

There will be on-site registration on March 26 beginning at 8:30 a.m. However, you are encouraged to register online while space is available.

The symposium will feature lectures, panel discussions, and a keynote address by Governor Wilder.  A morning panel on judicial and legislative history will include the Honorable Judge Roger Gregory, 4th Circuit Court of Appeals and an afternoon panel will examine the current 2020 election moderated by Dr. Larry Sabato, Political Analyst and Director, Center for Politics at the University of Virginia.

"We are honored to partner with Virginia Union University to create this day-long exploration of important topics such as civic engagement, leadership and the 2020 elections," said Susan T. Gooden, interim dean of the Wilder School.

The community, students and faculty are invited to attend the symposium.  The $25 registration includes the cost of lunch and a signed copy of Governor Wilder’s autobiography, Son of Virginia: A Life in America's Political Arena (Lyons Press, October 2015).  A limited number of free tickets will be available to VUU and VCU students.  To learn more about the event and to purchase tickets, please go to https://www.facebook.com/events/182167266449363/

L. Douglas Wilder is the 66th governor of Virginia and a distinguished professor at the school that bears his name.  A native of Richmond's historic Church Hill district, Wilder served as the commonwealth's chief executive officer from 1990 to 1994, and is the first African American to serve as governor of a U.S. state since Reconstruction, and the first elected African-American governor.  Wilder graduated from Virginia Union University and served in the United States Army during the Korean War, where he earned a Bronze Star for heroism in ground combat. After the war, he attended Howard University School of Law, establishing a legal practice in Richmond shortly thereafter. He won election to the Virginia Senate in 1969 as a member of the Democratic Party and served five terms before taking office as the lieutenant governor of Virginia, becoming the first African American to hold statewide office in the commonwealth. Wilder’s historic success in the 1989 Virginia gubernatorial election made him a major and immediate influence in the U.S. political arena. He was commended for his sound fiscal management and balancing the state budget during difficult economic times. For two consecutive years under Wilder’s administration, Virginia was ranked as the best-managed state in the U.S. by Financial World magazine.

Wilder returned to elective office in 2005, when he became the first directly-elected mayor of Richmond in over a half-century, winning every precinct. Since leaving office in 2009, he has worked as a distinguished professor at the Wilder School where he lectures and hosts symposia, including the most recent, "Race in Academia." He is the recipient of numerous awards, including the NAACP’s prestigious Spingarn Medal, awarded 34 honorary degrees and citations of the highest order, e.g. Veterans of Foreign Wars, life member of several government and public service organizations, the author of “Son of Virginia:  A Life in America’s Political Arena,” and a spokesperson on current issues - national, state, and local.

Virginia Union University is a premier liberal arts urban institution of higher education and center of excellence for the preparation of students and the development of leaders for tomorrow’s world. It was founded in 1865 to give newly emancipated slaves an opportunity for education and advancement. Virginia Union University offers a broad range of educational opportunities that advances liberal arts education, teaching, research, science, technology, continuing education, civic engagement, and international experiences. Visit https://www.vuu.edu/ for more information.