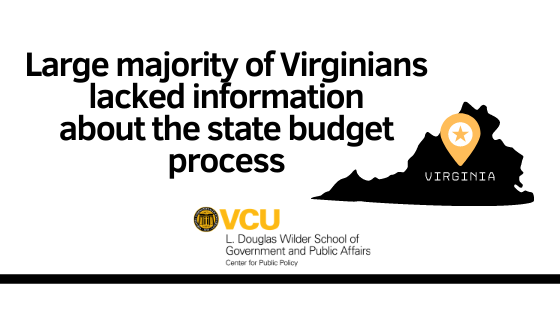 RICHMOND, Va. (Jan. 12, 2021) — More than 8 in 10 Virginians (81%) said they did not have enough information to approve or disapprove of the state budget that was passed during the most recent General Assembly special session, according to the new statewide Commonwealth Poll conducted by the L. Douglas Wilder School of Government and Public Affairs at Virginia Commonwealth University.

Gov. Ralph Northam called the General Assembly into special session on Aug. 18 to address a $2.8 billion revenue shortfall in the biennial budget, impacts directly associated with COVID-19. With the House of Delegates conducting their chamber’s work remotely and the Senate conducting its work at the Science Museum of Virginia, access and 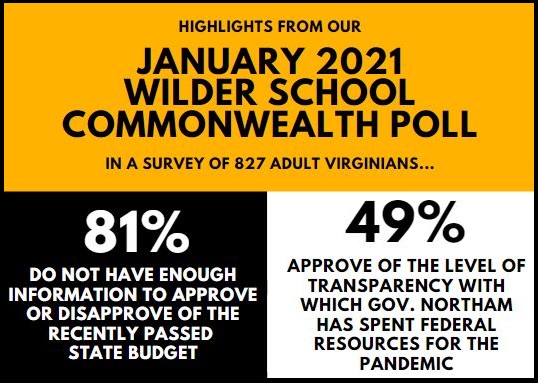 awareness of the budget process was conducted in a fashion never before seen in Virginia.

“The poll reflects an overwhelming majority of Virginians feel that the government has not provided information on how their taxpayer dollars are being spent,” said former Gov. L. Douglas Wilder.

Additionally, 49% of Virginians approve of the level of transparency with which Northam has spent federal resources for the pandemic while 36% disapprove. Democrats and minorities are more likely to approve with 80% and 61% respectively. Those in Tidewater region and Northern Virginia are also more likely to approve with 62% and 60%, compared to 45% in the Northwest, 38% in the South Central and 30% of those in the West region.