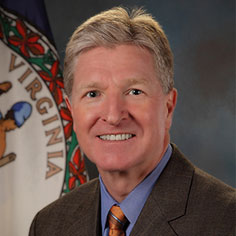 Spring graduation will take place at the Greater Richmond Convention Center in Exhibit Hall A, starting at 2 p.m.

Moran was appointed secretary by Gov. Terry McAuliffe in January 2014. Moran oversees 11 state agencies and provides oversight to the Homeland Security and Resilience Group. He began his career as a judicial law clerk in Arlington and in 1989 he became a county prosecutor. Moran represented the 46th legislative district in the Virginia House of Delegates from 1996 to 2008, including service on the House Courts of Justice Committee, the State Crime Commission and the Secure Virginia Panel.