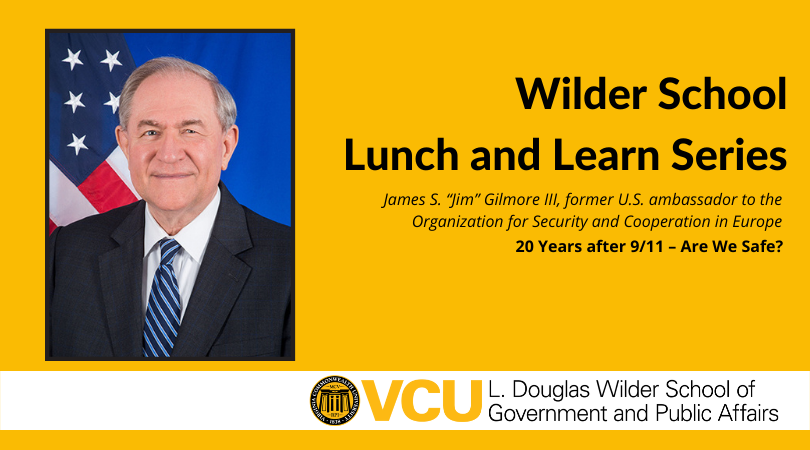 Join Ambassador James S. “Jim” Gilmore III for an in-depth discussion on homeland security and domestic terrorism prevention. Gilmore will assess the security landscape since the Sept. 11, 2001, terrorist attacks, reflecting on lessons learned as well as his gubernatorial administration’s response during this tumultuous time. Gilmore lends his decades of expertise in security and intelligence to inform future trends related to terrorism prevention domestically and globally.

William Pelfrey, Jr., Ph.D., professor in the School’s Homeland Security and Emergency Preparedness program, will serve as the session moderator, and Dean Susan Gooden, Ph.D., will provide opening remarks. The event will be recorded and shared through email and the Wilder School YouTube channel.

Closed captioning through Zoom will be available during the session. For more information, contact Stevan Dozier, director of development and alumni engagement, at doziers2@vcu.edu.

James S. “Jim” Gilmore III is former U.S. ambassador to the Organization for Security and Cooperation in Europe. The U.S. Senate confirmed him May 23, 2019. Gilmore grew up in the Fan District of Richmond, Virginia, and in 1971, he enlisted in the U.S. Army and worked as a counter-intelligence agent in West Germany. In 1974, Gilmore was awarded the Joint Service Commendation Medal for Service to NATO. Gilmore earned a B.A. in international relations, Russian area studies, from the University of Virginia in 1971. He earned his law degree from the University of Virginia School of Law in 1977. He practiced law until 1987, when he was elected chief prosecutor for Henrico County. In 1993 he was elected attorney general of Virginia. In 1997 he was elected Virginia’s 68th governor. During his tenure, his administration established the first secretary of technology cabinet position in the nation. He also led extensive work in economic development, including trade missions to the United Kingdom, Ireland, Germany, Chile, Argentina, Brazil, Japan, South Korea, Taiwan and Hong Kong. He has also traveled to Israel, Pakistan, Croatia, Austria, Czech Republic, Australia and Peru.

He ran for the GOP nomination for president from July 2015 to February 2016. Prior to his ambassadorship, he served as president and CEO of the American Opportunity Foundation, which works to shape discussions around American society and offer conservative solutions that promise prosperity, national security and American values. Since leaving office, he has served on several corporate boards of directors, is a member of the Council on Foreign Relations and has lectured at the Potomac Institute on homeland security and terrorism issues. He is married to Roxane Gatling Gilmore; they have two adult sons.