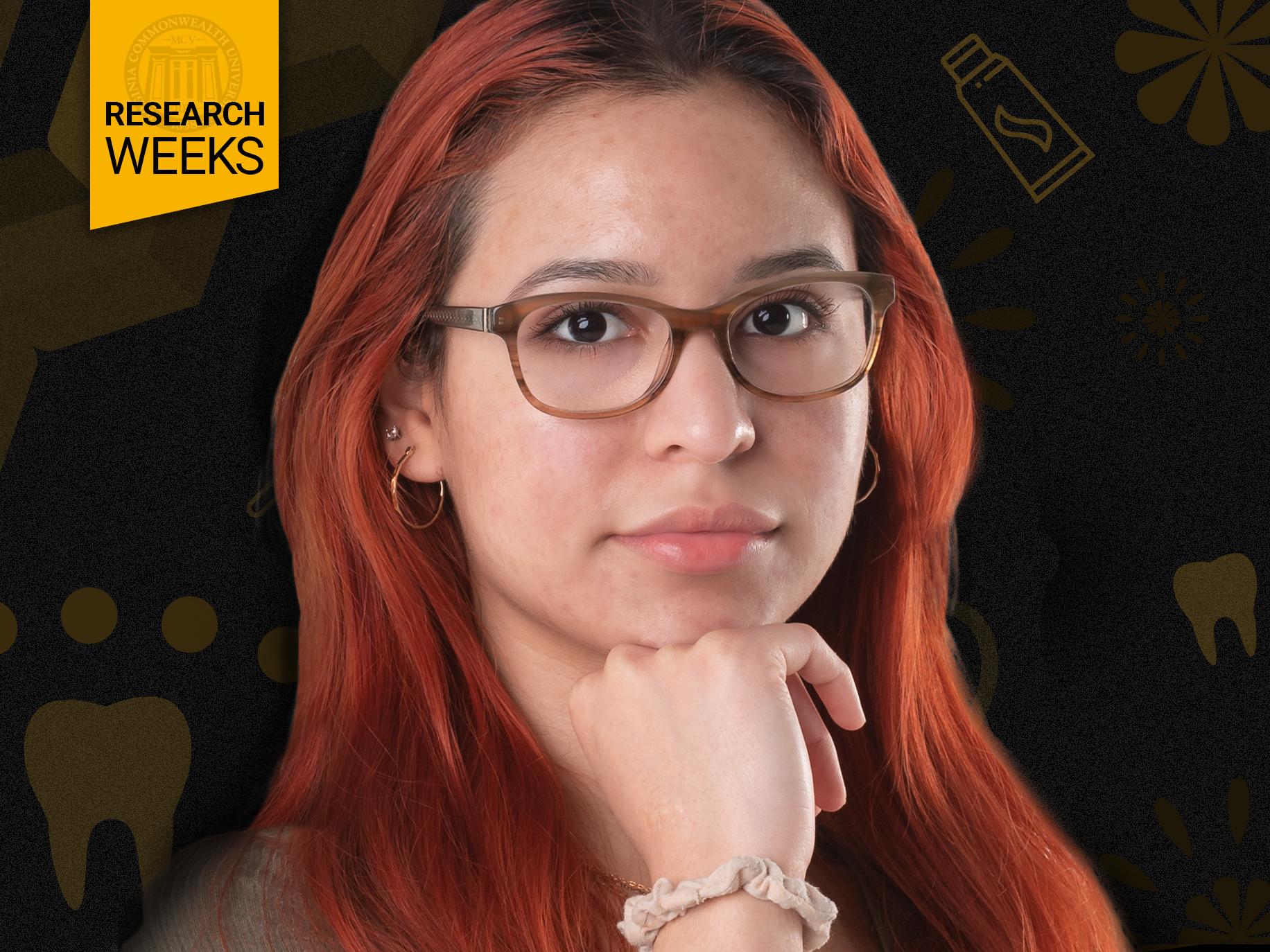 CrossOver provides health services to uninsured and medically underserved populations in the Richmond area. Nunez’s upcoming presentation for the VCU Poster Symposium for Undergraduate Research and Creativity will focus on findings related to Latinx patients’ experiences of their oral health that aren’t already reflected in the literature and how they perceive their personal experience.

Nunez is a first-generation Latinx student and a homeland security and emergency preparedness major graduating in May. She said she was surprised when she received an email in spring of 2019 encouraging her to apply to be in iCubed’s Commonwealth Scholars Program.

“I was a little scared just because I’ve never done any kind of research, but I saw the email and thought, ‘You know, maybe it’s a sign,’” Nunez said.

She originally didn’t know what she wanted to research, but after filling out a questionnaire was matched with iCubed’s Oral Health Core.

“I was very nervous at first, but I figured I might as well, just because even though it’s something that I’m not currently studying, I know I’ll be able to learn something and get things out of it,” Nunez said.

Sarah Raskin, Ph.D., an assistant professor at the L. Douglas Wilder School of Government and Public Affairs and member of the iCubed Oral Health Core, was Nunez’s primary mentor for the program. Nunez was also mentored by Aderonke Akinkugbe, Ph.D., an assistant professor at the School of Dentistry, an iCubed Oral Health Core member, and co-principal investigator of the CrossOver research project. Raskin said she was impressed with Nunez’s willingness to do research on a subject outside of her major.

“I am so grateful that Jenifer is so open-minded to learning about a topic that is really outside her field,” Raskin said. “That quality is so important for students who have any interest, maybe even dabbling in research. You never know where your career is going to go. I started out in HIV and women’s health, like 30 years ago, and never expected that oral health would be of interest to me.”

When Nunez started with the project, she worked with data from surveys and questionnaires filled out by dental patients at CrossOver Healthcare Ministry. The data was quantitative, such as the patient’s demographics, oral health-related quality of life and oral health knowledge.

Nunez and the rest of the team are trying to discover why patients do not receive dental services, and identify the barriers they face.

Recently, Nunez said she’s been looking over interview transcripts from patients that were conducted from 2019 to 2020. This has caused her to steer away from a technical view of the research, and to instead look at trends through a more personal perspective.

Raskin said Nunez’s qualitative analysis was originally guided by conventional analysis based on her readings of existing research literature about different predictors of dental utilization, but that after reviewing interview transcripts, Nunez became interested in the role faith and spirituality plays with these patients.

“I encouraged her to develop this completely original analysis of the relationship between senses of faith and spirituality and then dental outcomes,” Raskin said.

Nunez said she noticed that whether it’s economic status, job opportunities or the ability to receive dental services, Latinx populations often view their circumstances through the lens of their religion.

“They base it off a lot on faith and they [give thanks] a lot to God and think, ‘Thank God I have this opportunity, thank God I was able to run into this place [CrossOver],’” she said.

Nunez also noticed a lot of patients seemed to accept their circumstances rather than dwell on what they were going through.

“I’ve also realized how much [Latinx patients] just kind of go with the flow of things,” Nunez said. “I realize … they just kind of take things in and realize if it doesn’t go their way, then it’s just the way that it has to be.”

Raskin said the CrossOver research project will help give insight into how to improve opportunities for the dental safety net to serve as many patients as possible, and understanding why they may not seek dental care is key.

Nunez said this research has helped her give back to her community by helping an underserved population’s voices to be heard.

“I think that’s one of the main things that Hispanic people are not really receiving… people aren’t listening to their needs and they’re just kind of looking at the stereotypes around them,” Nunez said. “And my [goal] is to hopefully better educate the people around me, the people I’m working with in the future, by trying to have their voices out there and their opinions out there.”