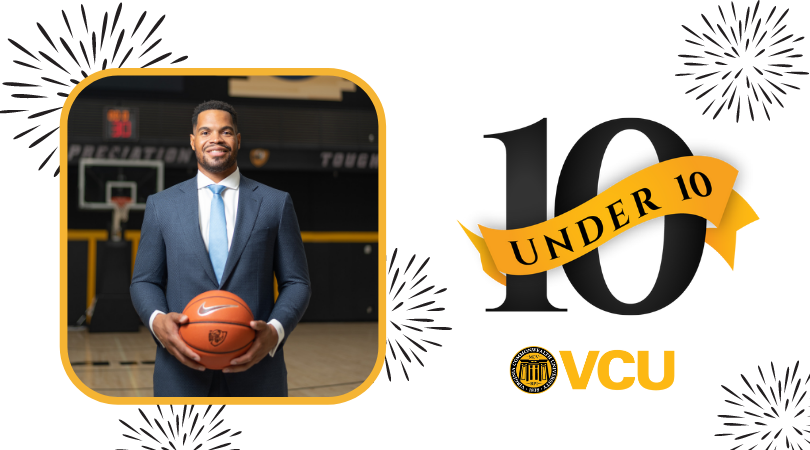 Wilder School graduate David Hinton Jr. (B.A.’12/GPA; M.Ed.’13/E) was selected as a 10 Under 10 honoree by the VCU Office of Alumni Relations. The 10 Under 10 awards program recognizes the noteworthy and distinctive achievements made by alumni who earned their first VCU degree (undergraduate, graduate or professional) within the past 10 years. This year’s honorees represent eight schools and colleges and six graduation years; eight of the honorees are from a marginalized population; and six are advanced degree holders with two pursuing advanced degrees.

A basketball court might seem like an unlikely training ground for a high-stakes job in the U.S. Secret Service, but it proved true for David Hinton Jr. Hinton aligns his experience as a student-athlete to his job protecting high-level officials: “There is no room for complacency or entitlement. No day is ever the same, so you have to approach each one with a determined and humble mindset.”

Hinton came to VCU from Winston-Salem, North Carolina, and he recalls “just knowing” VCU was the right place for him as soon as he and his father first visited campus. While pursuing his undergraduate degree in homeland security and emergency preparedness, he played for the Rams from 2008-13, including four NCAA tournaments and the historic 2011 Final Four season. “I loved being a student-athlete at VCU. It required adopting and maintaining high standards for myself, and I carry those with me to this day,” he says. VCU Athletics recognized those standards with the Iron Ram Award, which honors elite student-athletes with an exceptional work ethic.

As an undergraduate in the Wilder School, Hinton interned at the Virginia General Assembly and the Virginia Office of the Attorney General, experiences that piqued his interest working in the public sector. He earned his master’s degree in sports leadership and considered several lucrative corporate jobs, but ultimately knew he wanted a service-driven career.

In 2014, he became a member of the U.S. Secret Service, an ever-changing job that has taken him to six continents; and allows him to witness history firsthand. Above all, Hinton prioritizes paying it forward, as a way to express his gratitude for what VCU gave him. He remains engaged with the Wilder School and the Center for Sport Leadership, mentoring students and student-athletes and offering guidance about careers in government service and federal law enforcement. He serves as a mentor through the VCU Basketball Development Center and Student Athlete Support Services, and is a featured speaker for the Rams Leadership Academy.

Hinton is a member of Alpha Phi Alpha Fraternity Inc. and has been involved in its voter registration initiative and its Brother’s Keeper program, which supports older, disabled and more vulnerable members of the fraternity and their families. Hinton has also been involved with the March of Dimes and as a volunteer youth basketball coach in Alexandria, Virginia. He is passionate about helping young people develop a positive relationship with law enforcement.

“Our work is a ’no fail’ mission. If we mess up, the world stops. The sacrifice for the job is great, but the rewards are even greater.”

Hinton proudly credits his VCU experience for instilling in him a commitment to service and mission that is bigger than himself. “Our work is a ’no fail’ mission. If we mess up, the world stops. The sacrifice for the job is great, but the rewards are even greater.”

VCU Alumni will recognize this year’s 10 Under 10 honorees Oct. 22. The in-person event is invite-only, but the celebration can be viewed live on Zoom. RSVP today.