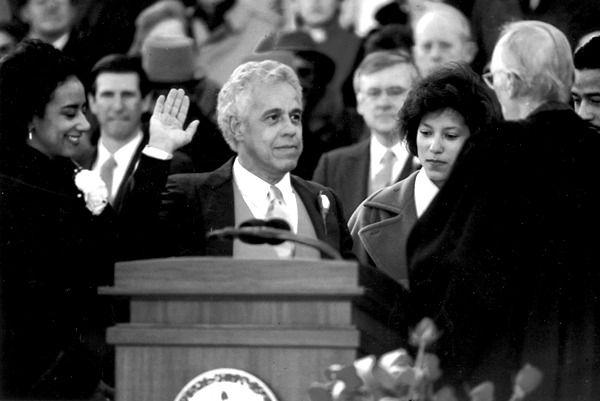 The L. Douglas Wilder School of Government and Public Affairs at Virginia Commonwealth University on Thursday marked the 30th anniversary of the inauguration of L. Douglas Wilder as the 66th governor of Virginia and the first elected African American governor in U.S. history.

The daylong virtual leadership symposium, in partnership with Virginia Union University, featured panel discussions and a keynote address by Governor Wilder. A morning panel on judicial and legislative history included Judge Roger Gregory, 4th Circuit Court of Appeals, and an afternoon panel examining the 2020 election was moderated by Larry Sabato, Ph.D., political analyst and director of the Center for Politics at the University of Virginia. The event also included a panel with students from both VCU and VUU discussing the importance of civic engagement.

In addition, Sombo Chunda, a doctoral candidate in public policy and administration at the Wilder School, and Raekwon Carter, a graduating senior majoring in Chemistry at Virginia Union University, were awarded student scholarships in the amount of $2,500.

Recordings of Governor Wilder's keynote address and each of the panel discussions will be available on the VCU Wilder School YouTube page.

For more information on each of the speakers and scholarship winners, please visit Wilder30.com.