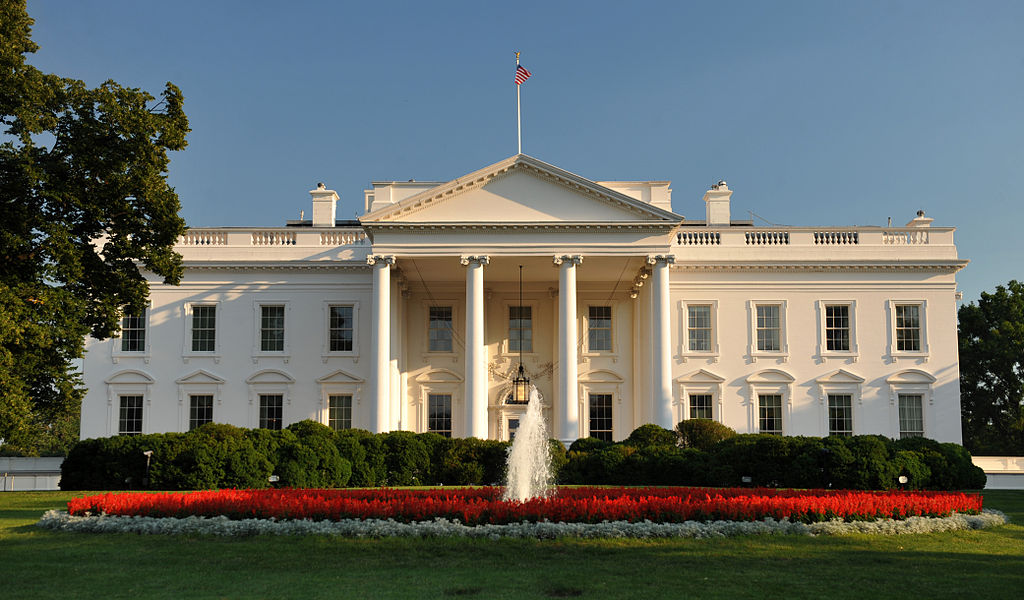 RICHMOND, Va. (Jan. 18, 2023) – Virginians were more likely to approve of how President Joe Biden is handling his job as president of the United States than to disapprove, with 50% of respondents reporting approval and 45% reporting disapproval, according to a new Commonwealth Poll conducted by the L. Douglas Wilder School of Government and Public Affairs at Virginia Commonwealth University. 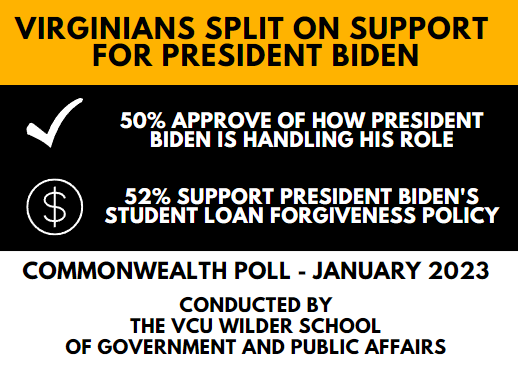 Those in lower income brackets tended to approve more highly of the job that President Biden is doing than those in higher income brackets. Those making under $35,000 annually were the most likely to say that they approve of Biden (54%), while those making $150,000 or more were the least likely to say that they approve (44%). Younger people, especially those in the 18-24 (52%) and 25-34 (50%) age ranges, were more likely to approve than older people.

Approval of President Biden’s plan to forgive student loans of up to $10,000, or up to $20,000 for Pell Grant recipients, was supported by a majority of respondents. Overall, 52% reported that they supported this policy, and 42% were opposed.

When considering family income, support tended to be higher among those in lower income brackets than among those in higher income brackets. Those earning an annual income of under $50,000 per year most approved of the policy (68%), while those earning an annual income of $50,000 to $150,000 had the next-highest rate of approval (56%). Those earning $150,000 or more per year were the least likely to approve of student loan forgiveness, with only 42% showing approval.

The Commonwealth Poll obtained landline and mobile telephone interviews from Dec. 3 to Dec. 16,
2022, with a representative sample of 807 adults living in Virginia. It has a margin of error of 6.02%.

Full poll results can be found at oppo.vcu.edu/policy-poll.

Ranked No. 35 among 275 graduate schools of public affairs by U.S. News and World Report and No. 29 in Public Management & Leadership, the L. Douglas Wilder School of Government and Public Affairs at Virginia Commonwealth University advances excellence in governance and promotes evidence-based public policy in Virginia and beyond. The school offers an array of graduate, post-baccalaureate and doctoral programs in virtually every policy area including criminal justice, homeland security and emergency preparedness, public administration, public policy and administration, and urban and regional studies and planning. Additionally, the Wilder School is home to the robust Centers and Institutes for Public Policy that provide applied research in the areas of state and local government, social equity, and leadership and a range of services to clients in state and local government, nonprofit organizations, businesses and the general public. Learn more at wilder.vcu.edu.

For nearly three decades, the VCU Wilder School Commonwealth Poll has been an important bellwether for policymakers in Virginia and beyond on a range of topics, including voting intentions, economic and workforce development, education, housing, public health, public safety and racial equity. The Commonwealth Poll was a featured 2020 Presidential Election Poll by CNN, approved based on a rigorous review of methodologies and assumptions that ensure that CNN-cited polling entities are employing the gold standard in public opinion research.