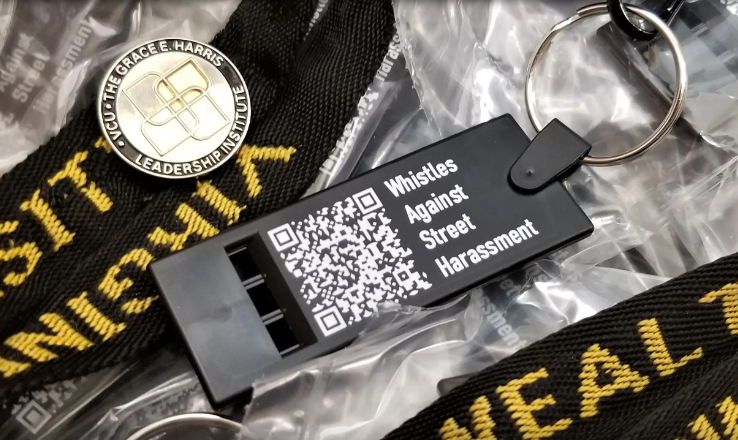 VCU Police, in partnership with the Grace E. Harris Leadership Institute, have launched the "Whistles Against Street Harassment" initiative. Whistles are available at select locations on both campuses starting on Sept. 20. (Contributed photo)

It’s an unsettling feeling: walking down the street and — without prompting — you hear a stranger catcalling or making unwelcome, suggestive comments.

The behavior, known as street harassment, is common in cities and the VCU Police Department worked with Virginia Commonwealth University’s Grace E. Harris Leadership Institute (GEHLI) this summer to address the problem.

As part of the institute’s university leadership program, groups of faculty and staff members from across the university and health system work together to research and develop projects that support the university's strategic plan. Group members identify a specific problem or need and create a solution that could realistically be implemented at VCU.

In a recent VCU Police annual safety survey, 25% of students, faculty and staff who responded named street harassment as one of their top concerns. After working collaboratively with a GEHLI leadership group, VCU Police are implementing the community-based Whistles Against Street Harassment (WASH) initiative to empower community members to stop street harassment.

Police will make free whistles available to students, faculty and staff to use if they experience harassment, or if they are a bystander and witness harassment.

The GEHLI group who developed the whistle initiative consisted of interdisciplinary faculty and staff members from both of VCU’s Richmond campuses.

“The ONE VCU Master Plan is guided by principles that place a strong emphasis on mobility, safety and campus unification,” said Amita Goyal Chin, Ph.D., a GEHLI group member and an associate professor in VCU’s School of Business. “Our team, which consists of members from both the academic and the medical campuses and is very interdisciplinary in nature, was really motivated to create an initiative that would help promote safety for all of our VCU community, on both, and in fact, on all of our campuses.”

The team started by defining street harassment, which is unwanted and intrusive behavior in a public space. It can include catcalling, kissing noises, horn honking, staring, unwanted conversations and more.

While such comments are often directed at women, anyone can be a target of street harassment regardless of their gender, gender expression, sexual orientation or race.

The group wanted to develop a way for anyone to respond to harassment, and a whistle serves two functions. First, it’s a practical tool for targets of street harassment or bystanders to interrupt the act and draw attention to the offender. Second, it’s a conversation starter on the subject of street harassment. Chin said an offender may think, “If I behave badly, I will draw attention.”

“Anyone at any time can find themselves a victim of street harassment. Blowing a whistle, although a very simple tool, could prove helpful in alleviating the immediate situation by drawing attention to the offender," — Amita Goyal Chin, Ph.D.

“Anyone at any time can find themselves a victim of street harassment,” Chin said. “Blowing a whistle, although a very simple tool, could prove helpful in alleviating the immediate situation by drawing attention to the offender.”

Group members say having the whistle available, or using it to disrupt harassment, is meant to give community members a sense of having power in an uncomfortable situation.

“Many times, you’re caught off guard and you're in shock. It doesn’t necessarily feel safe to say something back,” said Margaret Kidd, an access and electronic records archivist for VCU Libraries. “One of the things about the whistle is it is loud – it can attract attention. You can or cannot use it, but it gives you control in the situation when you feel like you're losing it.”

Group members said community members are encouraged to look out for others: If you hear a whistle, or notice that someone is receiving unwanted attention, ask if they need help. Talk about what street harassment is and call it out when you see it. Tell the harasser to stop.

Chin said the initiative is consistent with VCU President Michael Rao’s charge to "make equity and inclusion accessible everywhere,” including on the streets of the campuses.

The group has fielded questions about the project, including if using the whistle could put someone in more danger or escalate a situation.

Chin said community members will have to use their best judgment in every situation, but that the whistle is similar to a car alarm in that it can disrupt a moment. The person causing the problem probably doesn’t want that kind of attention.

“Using the whistle has to be at your discretion, if you feel safe using it,” Kidd said. “I probably wouldn’t blow [the whistle] if no one was around, that could be an escalation in some way. We need people to think about how to use it; ultimately, it’s up to you how to use it – it’s another tool in your tool kit.”

Chin added, “You don’t have to be near the person [making comments] to blow the whistle. You can be across the street.”

Another question the group addressed was if the project could be seen as performative, rather than solving a pervasive problem.

John Venuti, VCU and VCU Health’s associate vice president for public safety and chief of police, said the whistles are a way to potentially disrupt or stop nasty comments, but anyone who feels uncomfortable doing so is encouraged to call police.

“We partnered with the GEHLI team on this because the whistles are one possible solution to an ongoing problem,” Venuti said. “People contact VCU Police frequently to report street harassment, and we want to give people a tool to use to feel empowered. If someone calls and says they feel physically uncomfortable, we absolutely will send an officer to the location to assess the situation.”

Venuti added that an innovative, community-based approach such as this must be used to combat issues like street harassment.

Nakeina Douglas-Glenn, Ph.D., director and associate professor for VCU’s Research Institute for Social Equity in the L. Douglas Wilder School of Government and Public Affairs, is the director of the GEHLI program.

“I am always excited to see a team come together behind an idea and decide they want to go all the way from ideation to implementation,” Douglas-Glenn said. “Equally important is having a project sponsor who can help our colleagues see their way through the learning process toward a meaningful idea of benefit to our community.”

Venuti was the team’s sponsor, and this is the third GEHLI project VCU Police has moved from idea to implementation.

Douglas-Glenn said the availability of whistles will create a greater sense of community among bystanders.

“This very important project will empower walkers whether they use the whistle or not. Simply having it in their possession will provide an added measure of confidence.”

Where to get a whistle

Each whistle is black in color, flat and embossed with a QR code that directs community members to a program page on the VCU Police website.

Whistles will be available starting on Sept. 20 at the following locations: