Class of 2022: Whitney Brown excels with dedication to public service and her community 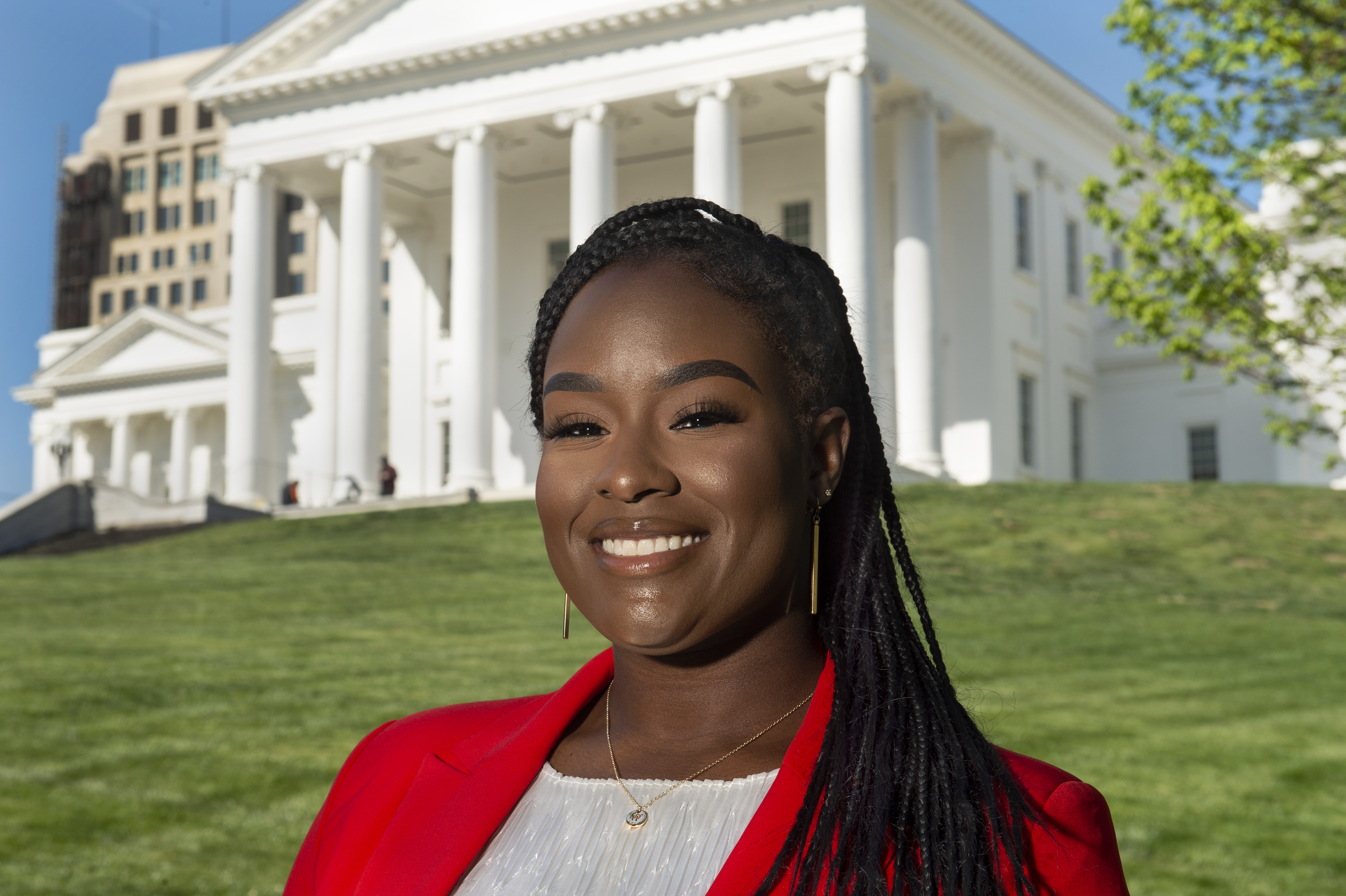 As an M.P.A. graduate student at the VCU Wilder School of Government and Public Affairs, Brown transforms her passion for social equity into action.

As a first-generation college student and native of Richmond, Whitney Brown had big aspirations to improve lives in her community. She channeled those ambitions into public service in Virginia and in Richmond, where she’ll continue to serve after graduation, and has never looked back.

Before attending Virginia Commonwealth University, Brown was an officer with the Richmond Police Department. Her work experiences equipped her with perspective on the complexities of governance and public service.

“Being a police officer helped me emphasize the importance of community engagement, community outreach and maintaining strong relationships of mutual trust between government and its constituents,” said Brown, who graduates in May with a Master of Public Administration degree from the L. Douglas Wilder School of Government and Public Affairs. “I also think it helped me frame things through a social justice framework and equity lens.”

After earning her undergraduate degree in legal studies, government services and public policy from Penn State University, Brown, who grew up in the Church Hill area of Richmond, sought to continue her education and became familiar with the strong reputation and rankings of the M.P.A. program at the Wilder School. She liked the idea of staying local and also benefited from tuition coverage as a two-time Wilder Graduate Scholars fellow, a key factor that clinched her decision to attend grad school.

In addition to her rigorous coursework, Brown gained career experience as a Virginia Governor’s Fellow in the Office of the Secretary of Administration to Gov. Ralph Northam. She made such an impact that, at the conclusion of her fellowship, she was selected to stay on as a special assistant and programs manager.

Brown conducted policy research related to COVID-19, data compliance, gender and sexual orientation in workers’ protections, and employee engagement. She also provided strategic advice and analysis on policy developments and implemented diversity, equity and inclusion pilot projects across state agencies. In addition, she drafted speeches and talking points for the governor, first lady and president pro tempore of the Virginia Senate and served as program coordinator for the annual Women in Innovation conference.

During her time at the Wilder School, Brown has gained extensive research experience. She developed multiple research projects, including the Goochland Housing Needs Assessment, and authored blog posts for Housing Forward Virginia, wrote a paper on “Ensuring Health Protections in Prisons during COVID-19” with recommendations for Virginia’s COVID-19 Health Equity Task Force and presented research on best practices for local government transitions as a 2022 American Society for Public Administration Founders Fellow.

Somehow during her busy schedule, she found time to become the general vice president for the Public Administration Student Association at VCU and a board member of the city of Richmond Human Rights Commission and Maggie Walker Community Land Trust. She also volunteered with OAR of Richmond, for Richmond City Council member Stephanie Lynch, and even refereed basketball for Richmond-area high schools.

“My inspiration for giving back is to give people access, or better access, to the things I never had,” Brown said. “It’s a way I combine my passions and the things I love with the needs of others. I want to make the world a better place than it was when I came into it, so that’s why I give back.”

“I think the two things that have helped me be successful at VCU are not being afraid to fail and taking advantage of opportunities,” Brown said. “A lot of the things I have received or done are because I wasn't afraid of rejection or failure.

“Honestly, I was overwhelmed sometimes, and I did put myself in uncomfortable positions by trying new things, but it all worked out, and being uncomfortable helps you grow.”

She’ll soon share more of her experiences and perspectives as the graduate candidate speaker at the Wilder School Commencement ceremony.

Brown credits her success to support and affirmation from her mother as well as the career guidance and support she received from Wilder School Dean Susan Gooden, Ph.D.; Shajuana Isom-Payne, Ph.D., assistant dean of student success; Nia Rodgers, public affairs research librarian; and Brown’s M.P.A. program faculty members, among many other supporters along the way.

"I am not the perfect student by any means, but I work hard and always try to put my best foot forward,” Brown said. “I deserve all the good things that come my way."

After graduation, Brown will focus on her new role as chief of staff and council liaison for Richmond First District Council member Andreas Addison. Brown’s career aspirations are ever-expanding, but her focus is clear.

“I just want to continue being a public servant that works directly with citizens,” Brown said. “I want to help inform policy and legislation to build a more equitable world.”