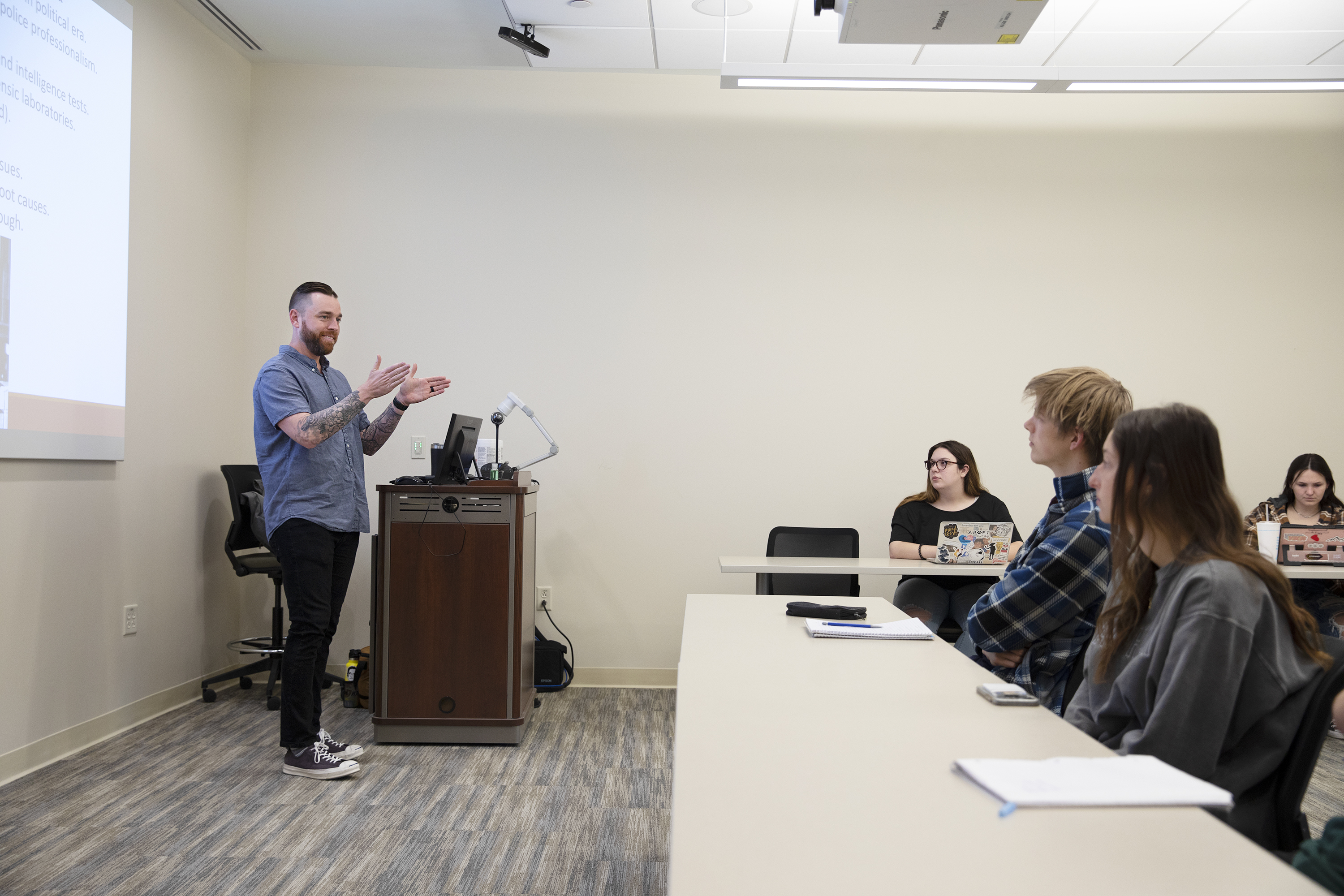 In recent years, Keener’s own research has focused on the structural barriers to re-entry for previously incarcerated parents and the intersection between mental health and the criminal justice system.

Steven Keener (M.S.’13/GPA, PPAD ’17/GPA) is the co-founder and inaugural director of the Center for Crime, Equity, and Justice Research and Policy at Christopher Newport University which brings students and faculty together with local and state leaders, as well as community activists, to conduct research projects and produce policy recommendations for the Hampton Roads region.

Keener, who launched the center in September of 2021, said it sprang from a desire to build upon the expertise of myriad faculty — those within criminology and outside of it — who were engaged in helping nonprofits, policymakers and other organizations in the Hampton Roads community with similar projects.

“We have many excellent researchers who are working with non-profits, policymakers, and others to build research projects,” Keener said. “Individuals are conducting impactful analysis that includes project evaluations, reports and assessments. With the creation of the center, we wanted to send the unequivocal message that this work, and its impact on the greater community, is valued at CNU,” said Keener.

Additional goals of the center include facilitating student internship and career opportunities as well as serving as a convener of public discourse around crime and justice.

In the short time since its establishment, the center has attracted considerable visibility.

Earlier this year, the Cities of Newport News and Norfolk reached out for assistance with a high-profile assessment of gun violence. The 36-question survey asks residents about the barriers to community resources, opinions on policing, and other safety issues.

“So much of who I am as an academic is grounded in the early questions raised in my studies at the Wilder School. How is criminology shaped by complex forces? What does our research mean for policy? What does it mean for practice, for the community, and the state?” - Steven Keener

In May, the center hosted the Hampton Roads Social Justice Conference which brought more than 350 individuals, policymakers and organizations together to talk about crime, housing justice, environmental justice, and more.

Keener was raised in the Allegheny Highlands of Clifton Forge, Va., a quaint town (population: 3,444) known for its pristine waters and trout streams and considered among the most treasured east of the Mississippi, along with breathtaking mountain views of the Virginia-West Virginia border.

Only about nine percent of Clifton Forge residents have attended college, but Keener, a talented high school student and star baseball player — a Louisville Slugger pre-season All-American who was twice named Virginian Review Player of the Year — was privileged to grow in the shadow of parents with high expectations.

“My father, Gary, is a career higher education administrator, and it was he who predicted that I might be a professor,” Keener said. “He saw, well before anyone, that the flexibility and autonomy of teaching and controlling my research tracked with my personality.”

“Still, I think we all thought that meant I’d be a higher-ed administrator,” he chuckled.

After high school, Keener attended Christopher Newport University (CNU), where he majored in political science and played as a starting infielder for the Captains. By happenstance, his political science program at CNU housed criminal justice courses at the time. A mentor suggested he take a few courses in criminology, which ignited a passion that once and for all set the path towards his future as a college professor. Soon thereafter Keener began his graduate studies at VCU, and the rest as they say, is history.

“I fell in love with VCU and Richmond right away,” Keener said.

“So much of who I am as an academic is grounded in the early questions raised in my studies at the Wilder School. How is criminology shaped by complex forces? What does our research mean for policy? What does it mean for practice, for the community, and the state?”

In recent years, Keener’s own research has focused on the structural barriers to re-entry for previously incarcerated parents and the intersection between mental health and the criminal justice system.

He also teaches an immensely popular immersive course on mental health and criminal justice. Undergraduate students in the course engage with local mental health advocates and shadow a behavioral health docket in Newport News, one of just 13 in the state, to better understand the structural inequities within the penal system. Students even debrief with General District Judge Matthew W. Hoffman, who presides over the docket.

Keener credits Wilder School faculty members like William Pelfrey and Hayley Cleary who pushed him to be enterprising in his research as a doctoral candidate and for his orientation as an instructor.

“They encouraged me to do work with state agencies, such as the Department of Criminal Justice Services, and to pursue community-engaged research overall,” he said. “Their mentorship continues to inform my work as a scholar and teacher at CNU.”