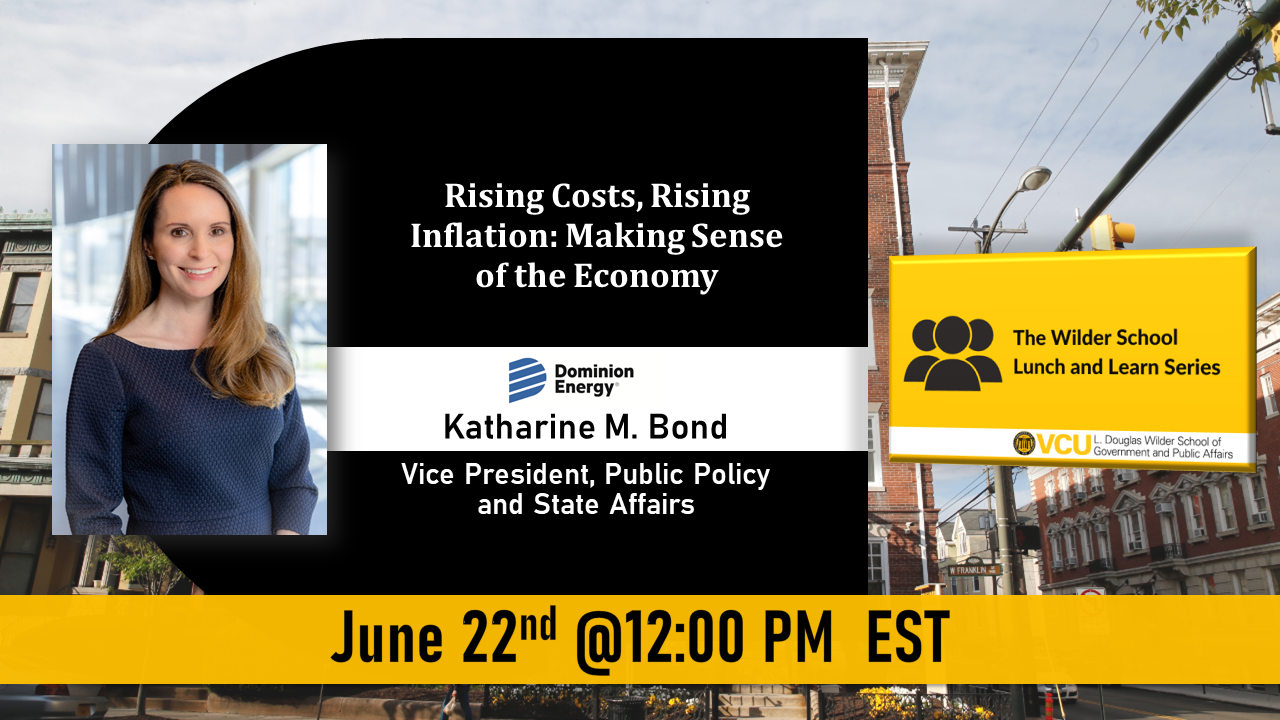 Katharine Bond, vice-president for public policy and state affairs at Dominion Energy, will discuss the economic trends shaping our future.

Across the country, Americans are struggling with rising prices and inflation on everyday goods, from gas to groceries. What are the economic factors contributing to this situation and how can we make sense of it?

These are topics Katharine Bond, vice-president for public policy and state affairs at Dominion Energy, addressed during a timely discussion on navigating the trends that are shaping our pocketbooks and future plans, entitled "Rising Costs, Rising Inflation: Making Sense of the Economy."

The roots of inflation

Bond shared a brief overview of the Consumer Price Index (CPI), an inflation measurement criteria produced by the U.S. Bureau of Labor and Statistics. It includes a monthly analysis of approximately 94,000 price quotes. In the past month, the CPI has climbed 8.6%, meaning that average goods and services are that much more expensive than they were just 12 months ago. She explained that this is the highest level seen since 1981.

Today, an individual needs $326 to have the same type of purchasing power as $100 in 1980. But while the CPI is a helpful analytical tool, it doesn’t fully capture the experiences of consumers. It also doesn’t capture supply shortages in both housing and automobiles, both of which have seen costs skyrocket for buyers.

“If we want to boil it down to its most simple explanation, it's really all about supply and demand,” Bond said. “The inflationary pressure we're experiencing today is driven by many factors, some of which come from a COVID-19. During the pandemic consumers and retailers started facing shortages across nearly all categories of goods and services ranging from toilet paper to electronics.”

As the pandemic disrupted supply lines — especially in the housing and automotive sectors — consumer demand has remained at an all-time high. This has impacted individuals as well as small businesses, which are a major economic driver for growth in the United States.

“According to the U.S. Census Bureau, most small businesses in the United States reported supply chain disruptions or delays due to COVID-19 almost 60% of consumers report being unable to get a product due to shortages,” Bond said.

Though supply chain bottlenecks are improving, these low levels have caused car purchases and house costs to rise by nearly 40 and 30 percent respectively since the pandemic began. Energy production costs in solar energy have also soared by as much as 50 percent, something Bond is especially cognizant about in her role with Dominion Energy.

While the federal government was quick to provide emergency relief funds to the tune of nearly 2.2 trillion dollars since the pandemic began, this cash stimulus has placed more money in circulation and consequently increased inflation along the way. Combined with extremely low interest rates, consumers have been encouraged to spend, which has further compounded supply shortages.

“The economic stimulus efforts along with the Bullish stock market and the infrastructure investment in jobs greatly expanded the money supply creating record demand for products and services,” Bond said. “The inflation that we're experiencing can be explained quite simply as too much money chasing too few goods.”

One conventional solution to lower inflation is to have the Federal Reserve Bank raise its benchmark interest rate — something that happened on June 15. The interest rate rose by three-quarters of a percentage point — the most aggressive hike since 1994. Practically speaking, raising the interest rate encourages investors to save, which reduces purchasing for goods and services, and this corresponding reduction in demand eventually drives down the price of goods.

“The economic stimulus efforts along with the Bullish stock market and the infrastructure investment in jobs greatly expanded the money supply creating record demand for products and services. The inflation that we're experiencing can be explained quite simply as too much money chasing too few goods.” — Katharine Bond

But raising interest rates has other consequences, such as making housing and consumer loans more expensive. This can forestall economic growth or even drive a recession, which has been seen during previous interest rate increases. It’s a balancing act that requires delicacy to maintain.

The government can also invest in workforce participation, which can increase the supply of goods and services. Bond mentioned that an immigration downturn due to the pandemic limited more than two million immigrants from working in the U.S. and filling labor roles. Encouraging development programs for workers will be one key issue in upcoming elections and may be a viable alternative to ameliorate a recession.

The economy was listed as the most important concern in the 2020 census results. Dealing with inflation will be at the forefront of the next election cycle, and may cause some unexpected shakeups.

“Policymakers are grappling with levers to relieve inflation, such as interest rates; they're grappling with immigration policy and stimulus funding,” Bond said. “Other ways to limit money circulating in the economy might be to cut government spending increase or taxes, which, as you probably all know, is not very popular with voters,” Bond said.

Whatever the results, voting is one essential activity individuals can engage in that can directly impact inflation. She also mentioned that making smart and sensible spending habits can help to save money by buying value-oriented goods or forgoing other non-essential purchases until the future. Bond fielded questions from the audience addressing the “great resignation,” concerns of price gouging, remote working as a cost-saver and more.