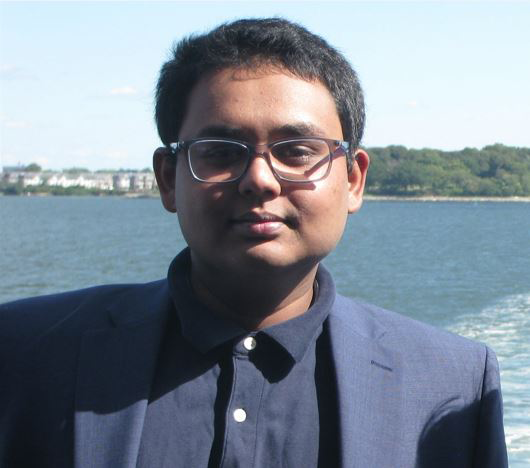 Billah went from academic suspension as a non-degree seeking student to being admitted fully as a degree-seeking student after suspension to eventually making the Dean's List during his last few semesters at the Wilder School.

“I’ve faced various tribulations,” Billah shared. “I was suspended for grades at one point and I had to go to J. Sargeant Reynolds Community College as a non-degree student. At the time, it made me feel aimless and like I didn’t know what I was doing at VCU. That was pretty difficult for me.”

Like many first-year college students, Billah was searching for the right fit and trying to figure out his career aspirations. Originally a business major, Billah soon realized that major was not for him and at the suggestion of his father, who works for a government agency, he began investigating the Wilder School homeland security and emergency preparedness program.

“I was at the School of Business for a year and it just didn't feel right,” said Billah. “It didn’t click with me. After talking to my father about the HSEP program at the Wilder School, I followed up with an advisor and she really helped me with making that difficult choice. I became a student in December about two years ago and I’ve stuck with the program.”

One of the hallmark experiences of the Wilder School is building close relationships, and despite his academic challenges, the Wilder School’s HSEP program faculty and staff have stood by him throughout his time at VCU. Billah feels prepared and excited for his future and he credits many supporters for helping him look forward to his professional career.

“I've had the opportunity in some of my homeland security classes, specifically with Professor Jim Keck who brought in many speakers that worked in various fields to gain great insight into all of the opportunities that are out there,” said Billah. “It was nice to see all the different career options at the career fairs as well.”

“I’ve only had one advisor in the Wilder School, Mrs. Zbell, who has been amazing and really helped me out during my time here. I would attribute a lot of my success to her.”

Student advising is a collaborative process, and together with Zbell, they developed a plan to support his goals and ambitions. The Wilder School Undergraduate Advising Office offers many resources for student success, including both academic and career advising.

"Farjan and his perseverance have really reminded me of why I am an academic advisor and why I love what I do,” said Nicolette Zbell. “Farjan came to me with a commitment to academic improvement that was clear, it was not about his past academic history, it was about where he was going to go from there. I am so honored to be part of his journey and get to see him not just overcome academic obstacles, but crush them."

Location is key, and here in the Richmond capital, Wilder School students receive no shortage of hands-on experience when it comes to government organizations, politics and public policy, which are strong interests of Billah. Farjan, who will graduate in December,  is working to secure a job at a government agency in northern Virginia.

Recently featured among the best online Master's in Emergency Management programs in the nation by Academic Influence, the Wilder School’s Master’s program is ranked third and prepares students to manage the complexities of disaster planning and response. Billah has been considering continuing his education exactly for those reasons.

“I am highly considering applying to the HSEP online program and have been in contact with the advisors that work with a master's program,” said Billah. “They have been very helpful and take the time to call and guide me forward with it because the application can seem complicated, but they’ve shown me how to manage my time with the process.”

Billah shared that if someone expressed interest in the Wilder School, he would ask if they were committed to serving others first and suggest they get an idea of what type of people and how they want to serve the community.

“I would tell them to look into those programs and see what career opportunities there would be, and to definitely reach out to the actual Wilder School because there are a lot of helpful and willing people here,” said Billah.