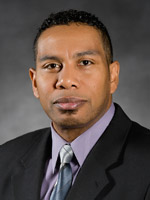 Director of human resources and operations

Franklin R. Wallace, Jr. has always been dedicated to serving his community-from founding a nationally-recognized nonprofit to serving on the Governor's Commission for Community and National Service (GCCNS). His professional career in community service began in 1995 when he co-founded a nonprofit small business incubator and training facility. During this period Wallace also completed two AmeriCorps service terms with Virginia Commonwealth University (VCU) AmeriCorps.

As an AmeriCorps team leader, he coordinated member service activities at nonprofit community service sites throughout Richmond. After his AmeriCorps service Wallace transitioned within VCU's Office of Community Programs to Director of Project Tutor, an academic partnership for court-referred juvenile offenders between VCU and the City of Richmond's 13th District Juvenile Court. Two years later, Wallace was appointed Field Coordinator for the VCU AmeriCorps and America Reads programs.

Early in 2002, he was promoted to Director of the VCU AmeriCorps and America Reads programs in VCU's new Division of Community Engagement, helping to establish the program's successful legacy (VCU AmeriCorps received the Governor's Community Service and Volunteerism Award for Outstanding National Service Program in 2002). Wallace was also honored that year by Virginia Governor Mark Warner for his outstanding commitment to service, receiving a special award for his coordinating efforts as the Director of Volunteer Liaisons for the Governor's Partnership for Achieving Successful Schools (PASS) Program for Richmond Public Schools.

From 2002-2005, Wallace also held the mantle of Director of the VCU GEAR UP program, a federally funded college preparatory designed to create and develop strategies promoting academic success for over 1000 Virginia students aspiring to attend college from economically and socially challenged communities.

During this period Mr. Wallace also served as the first two-term President of the VCU African American Alumni Council (2004-2008), was appointed as inaugural Chairman of the Virginia Service Foundation (2006-2008), and served four terms with the GCCNS, serving as Vice Chairman, and chair of its Resource Committee (2004-2008).

In the Spring of 2008 Wallace left VCU accepting an offer to lead the Commonwealth of Virginia’s AmeriCorps Portfolio as Virginia’s AmeriCorps Senior Program Officer for the Office on Volunteerism and Community Service at the Virginia Department of Social Services. During his service to the state at VDSS, Wallace was selected as a member of the 2008 class of the Virginia State Department of Social Services Leadership Academy.

Eighteen months later, Wallace returned to VCU in September of 2009 becoming the Director of Operations for the L. Douglas Wilder School of Government and Public Affairs in the College of Humanities and Sciences, earning certification as one of the University’s Master Advisors while also teaching on the undergraduate level as a faculty member in the Wilder School’s Political Science program.

Today, Wallace continues to serve the university and its internal and external communities for the independent L. Douglas Wilder School of Government and Public Affairs, under the Office of the Provost.