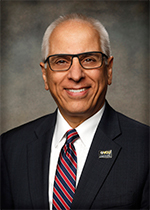 John Accordino, Ph.D., FAICP, began his VCU career in 1986 as an assistant professor in the Department of Urban Studies and Planning. He later served as chair of the department. More recently, he was director of the Wilder School’s Center for Urban and Regional Analysis (CURA). He served as interim dean and then dean from July 2016 until April 2018. He is a professor in the Wilder School’s Urban and Regional Studies and Planning program and also directs partnerships with universities in Italy and Germany.

He has written books, monographs and articles on urban revitalization and related topics, as well as applied-research reports and plans for government agencies, retail merchants associations and community-based development organizations in economic development, commercial revitalization and workforce analysis. He has established student exchanges with two German universities, and he directs VCU’s partnership with the University of Messina, Sicily, which supports both scholarly and student exchanges.

Captives of the Cold War Economy: The Struggle for Defense Conversion in American Communities. Praeger Publishers (2000).