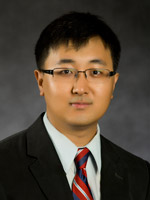 Prior to joining the Wilder School, Dr. Jin worked extensively as a systems project consultant for a number of state government agencies in Florida, including the Department of Financial Services, Department of Health and Department of Children and Families. His recent grant includes $100,000 from the Robert Wood Johnson Foundation for his research on the issues of access to health care and shortage of physician workforce. In 2016, he was selected to receive the Faculty Excellence in Scholarship Award by the Wilder School. He is the associate editor and book review editor of Journal of Public and Nonprofit Affairs.