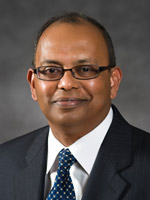 Niraj Verma is an expert in urban planning and management. He joined the Wilder School in 2010 and served as its director and first dean until 2016. Under his leadership, the Wilder School became a stand-alone school at VCU directly under the provost and gained several new faculty roles in teaching, research and administration. Prior to joining the Wilder School, Verma served as professor and chair of the Department of Urban and Regional Planning at the University at Buffalo. He began his academic career at the University of Southern California in Los Angeles, where he directed doctoral programs in the School of Policy, Planning and Development as a tenured faculty member.

Verma’s scholarly work has been contributing toward a theory of planning and governance that draws on the philosophy of American pragmatism and particularly the philosophy of  William James. He is the author of Similarities, Connections, Systems: The search for a New Rationality for Planning and Management (Lexington 1998) and the editor of Institutions and Planning (Elsevier 2008) as well as several articles and contributions to edited books. He serves on the editorial board of several academic journals including Planning Theory, Planning Theory and Practice, S, Town Planning Review and Urban Design International.

Verma's research, teaching and education have been recognized internationally. Most recently, he served as a Visiting Fellow at the Judge Business School at Cambridge University and was awarded a Fulbright-Nehru Award for Academic and Professional Excellence. He has also been awarded fellowships by the Rotary Foundation, the German Academic Exchange Service and the Zumberge Foundation. Verma was the only North American urban planning scholar invited by the National Academy of Engineering to the 2002 Frontiers of Engineering Conference and the only U.S.-based academic invited to supervise the 2001 doctoral workshop of the Association of European Schools of Planning held in Lodz, Poland. His contributions to doctoral education include serving as the chair of the American Collegiate Schools of Planning doctoral committee for more than five years and as a member of the National Association of Schools of Public Affairs and Administration doctoral committee. Many of his doctoral students are now academics at major research universities or are otherwise engaged in successful research careers.

Verma's research has been supported by the Federal Transit Administration, the Department of Transportation and by several foundations and international organizations, including the Alexander Humboldt Foundation, Rotary Foundation, German Academic Exchange Service (DAAD), Lincoln Institute of Land Policy, and several other organizations. Professionally, his work includes large-scale projects such as technology planning for an integrated steel plant in India and developing a master plan for the state of Hawaii’s library system.

Verma is the author or co-author of more than 25 articles and book chapters and of “Similarities, Connections, Systems,” published by Lexington Books in 1998. He is also the editor of “Institutions and Planning,” published by Elsevier in 2007. An invited speaker at many distinguished universities, including Berkeley, MIT and Harvard in the U.S. and Naples, Newcastle, Rome, Seoul National and Stuttgart overseas, Verma’s work has been translated into German, Italian and Korean.