Election analysis 2021 and looking to the future with Bob Holsworth 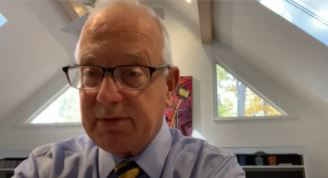 On Nov. 17, 2021, Bob Holsworth, Ph.D., a respected political scientist, spoke at a virtual Lunch and Learn Series event hosted by the Wilder School.

On Nov. 17, 2021, Bob Holsworth, Ph.D., a respected political scientist, spoke at a virtual Lunch and Learn Series event hosted by the L. Douglas Wilder School of Government and Public Affairs. His presentation, “2021 Virginia Elections Analysis and What’s Ahead,” explored contributing factors that led to the election of Glenn Youngkin and the failures that loosened Democrats’ hold on the state.

What just happened and why?

There were many unique factors that contributed to a loss for the Democrats, according to Holsworth. While many commentators have focused on populated Northern Virginia and Richmond regions as essential to election victory, Holsworth sought a broader perspective. Citing an area he called “RoVa,” or the “rest of Virginia,” Holsworth shared that a strong turnout at the polls in rural areas was a key attribute for Republican success, especially in the south and southwest areas of the state with low African American populations.

“The Democrats just cratered, and they created an unbelievable way, in places where they were getting 30 to 33% of the vote eight years ago,” said Holsworth. “They're now getting 17, 18, 19% of the vote. And so what you saw was this just extraordinary sort of shift.”

Other significant factors that harmed Democrats included: low voter turnout in many areas of the state, especially among younger voters; a statewide demographic shift in women’s votes for Republicans; and declining approval ratings for the Biden Administration.

Holsworth proposed that there were many shortcomings in the way Democrats failed to address key issues like inflation and K-12 education, with many exit polls citing frustrations with the ways school districts across the commonwealth responded during the pandemic.

The decision for Virginia House Democrats to take marijuana legalization off the 2021 ballot largely hurt young voter turnout, according to Holsworth. The long-term impacts of the pandemic also potentially contributed in ways other than many political analysts originally believed.

While Virginia’s improvement in COVID infections and deaths over the summer should have aided Democrats, Holsworth believes this shifted concern to other issues of deep ideological divides, like critical race theory instruction in K-12 schools and the economy as gas and food prices have continued to rise.

Holsworth said he believes Youngkin was especially effective at appealing to different groups of Republicans through specific messaging to solidify his bases with pro-life and religious groups, suburban moderates and Trump supporters, all while Youngkin skillfully distanced himself from Trump in person. Holsworth contended that declining national  support for Biden—seen primarily through a hasty military withdrawal from Afghanistan and other factors like economic recovery from the pandemic—played more of a significant role in voters’ minds than Youngkin’s proximity to Trump Republicans.

What’s next for Virginia?

One of the most important things will be for Youngkin to determine what kind of Republican he’ll be as governor, said Holsworth. Will he share traits of a traditional Virginian conservative or become more of a “new Republican?” On one hand, Youngkin has already pressed that he’ll move to eliminate statewide mask mandates but supports independent masking decisions by local school boards. Youngkin will have to make careful choices regarding his approach, Holsworth stated.

“There's any number of issues where Youngkin is going to have to continue to walk the line, except now he’s definitely going to have to make choices, and it will be fascinating to see how,” said Holsworth.

As Governor, Youngkin’s approach during his first legislative term will support the priorities of a Republican-controlled House. The question Holsworth posed is how far will they be willing to take their agenda?

He suggested that elimination of the grocery tax will likely pass, which has largely been a Democratic-led initiative as lower-income families spend a disproportionate amount on food expenses compared to wealthier families. Rollbacks on gas taxes may be less likely as they’d impact existing and planned transportation projects. Holsworth sees Youngkin extending financial support for historic black colleges and universities, a major campaign promise (and an issue of specific public concern for the school’s namesake, Gov. L. Douglas Wilder).

The election of Republican attorney general, Jason Miyares constitutes a sea change for Virginians that will be strongly pro-law enforcement.  In the near long-term, Holsworth sees the continuation of a “social culture war” taking place, especially a polemicizing of K-12 education issues such as critical race theory education that will draw significant lines in the political sand across the Commonwealth.

He described the issues of abortion and transgender policies as dog whistles that will further partisan divides. Holsworth concluded that the next election cycle—Congressional elections in 2022—will be a vital opportunity for Democrats in Virginia to see if they can recover from 2021 losses and maintain their majority in Virginia's congressional delegation.

Watch the full Lunch and Learn presentation on Youtube