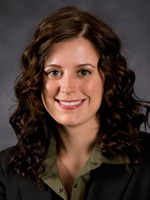 Blythe A. B. Balestrieri

Blythe A. B. Balestrieri collaborated with Dr. Robyn McDougle and Sheriff Michael Wade to create the Henrico County Sheriff’s Office Basic Jailor Academy, which has been in successful operation since summer 2011. Bowman Balestrieri also oversees law library services for jail residents at the Richmond City Sheriff's Office. She received the Wilder School Faculty Excellence in Scholarship Award for 2014.

Balestrieri also helped put together an international conference on organized crime in art and antiquities while serving as a key member on the planning committee of the International Scientific and Professional Advisory Council to the United Nations. While working for the Douglas County Department of Corrections in Omaha, Neb., she received the Director’s Coin of Excellence as well as a commendation for her work in the county jail law library. As a junior faculty member at VCU, she was selected to serve as guest editor on two special editions on art crime for the Journal of Contemporary Criminal Justice and Crime, Law, and Social Change. Balestrieri is a member of the American Society of Criminology, American Jail Association, American Correctional Association, Virginia Correctional Association, Southern States Correctional Association, the United States Committee of the Blue Shield and the Archaeological Institute of America. Balestrieri is also a Transnational Research Fellow in VCU's Wilder School, with experience in consulting on and drafting jail-related legislation as well as providing expert testimony to the General Assembly on jail-related matters.

Balestrieri, B. A. B. (2018). SB36, Nonconsecutive Day Sentencing in Virginia: Final Report to the General Assembly.

Balestrieri, B. A. B. (2017). SB851, Nonconsecutive Day Sentencing in Virginia: Final Report to the General Assembly.

Proulx, B.B. (2011). Drugs, arms, and arrowheads: theft from archaeological sites and the dangers of fieldwork. Journal of Contemporary Criminal Justice 27(4): 500-22.