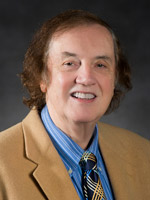 Language and other coursework at Sorbonne, University of Paris; Centro Linguistico Italiano Dante Alighieri Scuola Per Stranieri and at Universidad Complutense de Madrid

Prior to joining VCU in 1980, Dr. Farmer served as a budget analyst, an administrative analyst and an economist. He also served as director of operations management, special assistant to the New York City police commissioner and as a division director for the National Institute of Justice in the U.S. Department of Justice. During his tenure at VCU, he has served as chair of the Department of Justice and Risk Administration, professor of public administration and political science and affiliate professor of philosophy. In 1999, he received the Distinguished Scholar Award from the College of Humanities and Sciences.

Farmer serves as a member of the editorial boards of Administration and Society, Public Voices, Administrative Theory and Praxis, and Employee Responsibilities and Rights. He also serves as a reviewer for Public Administration Review and other journals. Farmer has been a community service associate for Virginia’s Secretary of Public Safety and a member of the community boards of Human Resources Incorporated and Jump Street drug and rehabilitation programs. He has also provided management consulting services to 40 state and local governments, including the states of Illinois and Pennsylvania and the cities of Los Angeles, Atlanta, Durham and Oklahoma City. Consulting specialties include management, organization, personnel, revenue administration, data processing and performance measurement.

Book Chapters and Articles
In the period from 1982 to 2012, Farmer has authored some 80 significant chapters and journal articles. Please refer to his personal website for a complete list of publications.