‌One afternoon in 1974, intern Gregory H. Wingfield left his office in the State Community Development Department on Main Street in downtown Richmond, looking to hitch a ride or catch a bus to his 4 p.m. urban studies class at VCU. Coincidentally, department director, T. Edward Temple, Ph.D., also his urban studies professor, pulled over and offered him a lift.

“After a couple times stopping to pick me up on Main Street, he said, ‘Why don’t we meet in the parking deck at 3:30 and drive to class together?’” Wingfield recalls, amazed that a professor would offer a ride to “a hippie-looking guy with shoulder-length hair.” As the semester wore on, Temple and Wingfield conversed on the ride to class about topics ranging from classroom assignments to local and national politics.

“Upon reflection, I believe I got more real-world experience in the 15-minute car rides than I got in class. The one-to-one dialogue was the key to the difference. I was honored that when I graduated, he allowed me to use him as a reference as I began to look for full-time employment in the community development field. This was even more amazing as he was, at that time, the new president of VCU!” 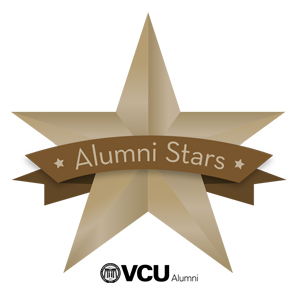 Wingfield, who earned his bachelor’s degree in 1974 and his Master of Urban and Regional Planning in 1976, is among 15 VCU graduates being honored as 2017 Alumni Stars. They will be honored at a special reception on Friday, November 3, at the Science Museum of Virginia.

When Wingfield began to run his own organizations, he made a point of hiring interns from his alma mater. His career has included stops at state and regional agencies such as the Virginia Department of Housing and Community Development, Forward Hampton Roads and Greater Richmond Partnership Inc., of which he was founding president for more than 20 years.

He is proud to have been involved with teams that attracted to Virginia more than 800 new businesses that created more than 100,000 new jobs. He also has been honored the Virginia Economic Development Association’s highest honor, the Cardinal award for support of the profession.

“Greg Wingfield is an outstanding alumnus of the Wilder School and continues to give back, not just as a loyal supporter but as a senior fellow whose economic development expertise enhances our work,” said John Accordino, Ph.D., dean of the Wilder School. “We are very fortunate to have him working with us. “

Giving back is a pillar of Wingfield’s life.

“I feel I owe folks for the opportunity they gave me when I first got started,” he says. “Now I have made the perfect circle by coming back to VCU’s Wilder School 40 years after I graduated.”