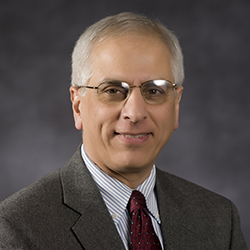 He will be joined by former Virginia Gov. L. Douglas Wilder, who will offer brief remarks to the school’s ninth graduating class before an expected audience of about 2,500. Wilder, the first African American to be elected governor of any state, is a distinguished professor of public policy at the school that bears his name.

Accordino will deliver his inaugural address as dean at the Wilder School’s graduation, which begins at 2 p.m. at the Greater Richmond Convention Center in Exhibit Hall A. He will be joined by two student speakers—Axana Soltan, who will receive her bachelor’s in Criminal Justice, and Elizabeth Greenfield, who will receive her Master of Urban and Regional Planning.

A total of 257 degrees—64 graduate and 163 undergraduate—will be conferred during the ceremony.

The Wilder School’s graduation is one of 13 school exercises that will take place May 12-13. All school exercises will culminate in a comprehensive VCU commencement ceremony on May 13 featuring U.S. Sen. Timothy M. Kaine of Virginia, the Democratic Party’s nominee for vice president in the 2016 presidential election. The VCU commencement will take place at the Richmond Coliseum.