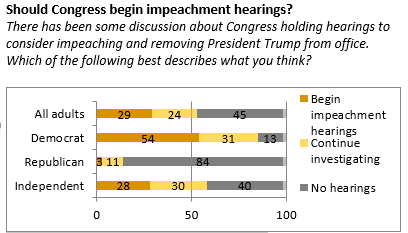 According to a statewide poll conducted by L. Douglas Wilder School’s Center for Public Policy, a majority of Virginians believe that there is enough evidence to begin impeachment hearings or continue investigation into President Trump. The Commonwealth Poll 2019, sponsored by Virginia Commonwealth University, obtained telephone interviews with a representative sample of 800 adults, age 18 or older, living in Virginia from September 23 to October 4.

The poll found that a majority of Virginians (53%) believe that there is enough evidence to begin impeachment hearings (29%) or that Congress should continue investigating the issue (24%). Only 45% say that Congress should not hold impeachment hearings. These findings fall in line with other recent national polling that indicates the public shifting towards support for impeachment since the release of phone transcripts between the President and Ukrainian officials.

The poll also highlighted an obvious partisan divide with more than eight-in-ten Democrats (85%) think Congress should continue on its course with 54% saying that impeachment hearings should start now. Conversely, more than eight-in-ten Republicans (83%) believe there should be no hearings. Respondents identifying as independents were more likely to support the move toward impeachment with 58% saying Congress should begin the hearings (28%) or continue investigating (30%).

“It is clear that the people want to know what is happening in our government,” said Governor L. Douglas Wilder, “If there has been wrongdoing, they want to know and by whom. The poll responses indicate a deep divide between the political parties.  Getting the facts underlying the call for impeachment hearings or impeachment itself is the most important issue to have come from this poll.”

In addition, the poll finds that more Virginians plan to vote for the democratic candidate over Trump in the upcoming 2020 election. Joe Biden enjoyed the greatest level of support, beating Trump by 8 points (52% to 44%), followed by Elizabeth Warren with a 4-point lead (50% to 46%). Bernie Sanders had only a one point lead, with 48% compared to 47% for Trump. Likewise, when respondents were asked generically which party they would prefer to have control of the White House after the next election, the Democrats only had a 2-point lead, with 49% saying Democratic control and 47% saying Republican control.

“Vote preference at this stage does not seem to be based on particular issues,” said Wilder, “but more on favorability, personality, (e.g. Who might be best to beat Donald Trump), and age and health.”