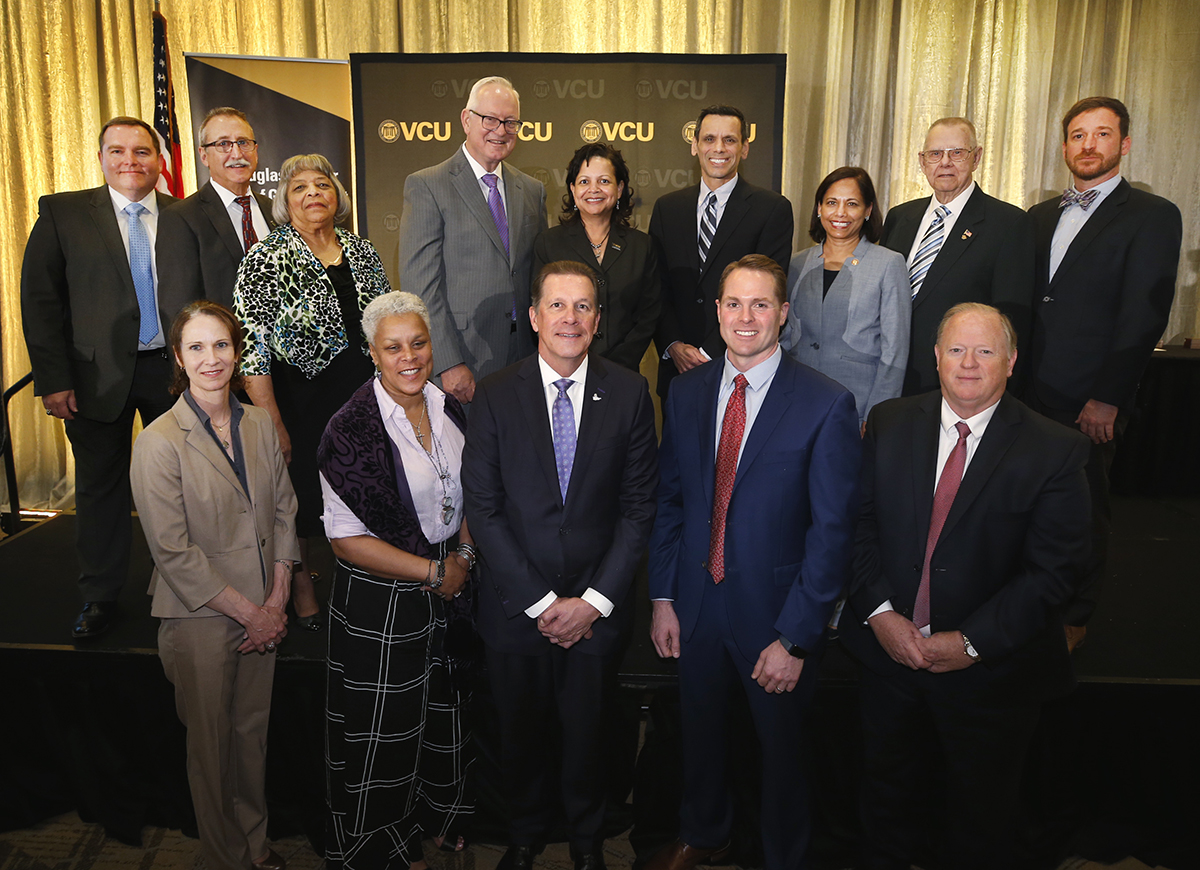 More than 250 attended the 13th EVGA luncheon and awards ceremony which highlighted the achievements of the organizations, non-profits, public-private partnerships and individuals who have made significant contributions to Commonwealth communities.  A full list of the 2019 EVGA recipients and a brief video highlighting their achievements is included below.

Once a building many thought would be torn down, Goochland’s Central High School Cultural and Educational Complex now stands as a community resource providing a facility for a variety of programs and activities as well as a museum and conference space. This award recognizes the GoochlandCentral High School Committee, which was formed by the Goochland County Board of Supervisors in 2013 to help determine the building’s future.  Central High School served as the African-American High School from 1938-1969 until Goochland Schools were desegregated and later served as a middle school.  The School, once a symbol of division, has become a beacon for community unity.

The Virginia Home is a private, non-profit 130-bed facility in Richmond whose mission is to provide compassionate and professional residential care to adult Virginians with irreversible physical disabilities regardless of their ability to pay. Celebrating its 125th year in 2019, The Virginia Home works to positively impact and transform the lives of people with physical disabilities by providing health care, physical, occupational, speech therapy, shelter, food, safety and adaptive equipment so residents might reach their highest potential and level of independence. Residents come from across the Commonwealth and represent diverse backgrounds and ethnicities.

Equality Virginia believes in a truly inclusive Commonwealth where all are equally valued, regardless of sexual orientation or gender identity. For the past 30 years, Equality Virginia has been the leading advocacy organization in Virginia seeking equality for lesbian, gay, bisexual, and transgender people. Equality Virginia’s work resulted in the 2014 decision to recognize gay and lesbian marriage in Virginia, as well as the publication of the Commonwealth’s model human resources policy for transitioning employees, among other accomplishments.

The mission of the Virginia Treasury is to serve as steward of the Commonwealth’s financial resources. This is accomplished through five distinct and diverse programs including cash management & investments, debt management, risk management, unclaimed property, and trust accounting & banking operations. Under the leadership of the State Treasurer, Treasury worked with Qlarion to develop and implement a data analytics system.  This system expanded each division’s ability to gather information from multiple sources, analyze trends, and use the data for strategic decision making. These capabilities enabled improved customer service and more effective responses to stakeholder questions. One example of the impact of data analytics capability and process improvement is a 35% increase in the number of unclaimed property claims paid in fiscal year 2018.  Additionally, an executive dashboard provides the management team an instant snap shot of the most important metrics across the entire organization.

The Virginia Department of Corrections is the national leader with the lowest recidivism rate of 23.4% in the country. For those completing Corrections’ Career and Technical Education program it is even more impressive at 12.3%. Two career training programs are being recognized:  the Green HVAC program developed with Johnson Controls in Chesapeake and the partnership with the non-profit Thoroughbred Retirement Foundation (TRF) James River Chapter. The rigorous Green HAVAC program is a full preparatory course for those preparing to enter the industry post release.  The Johnson Controls program is available to those housed at Indian Creek Correction Center in Chesapeake.  In conjunction with the TRF, offenders care for horses on a daily basis at the State Farm Correctional Complex in Goochland, allowing them to be certified in the Groom Elite curriculum and learn marketable farrier skills.

His public service began 75 years ago when Joseph Vass joined the Virginia Protective Force at age 15. He has worn the service uniform of every U.S. military branch and that of the Henrico Police Department. Vass has also served as security chief for the University of Richmond and Richmond Airport and police chief for the towns of Poquoson and Boykins.  At age 91 Joe is still serving the public as the inventory and supply officer for the Capitol Police, where Police Chief Anthony “Steve” Pike describes him as a star for the Capitol Police and a star for his country since well before many of us were born.

Grace E. Harris spent her career in service to the Commonwealth, leaving a lasting legacy of collaboration, equity and transformational leadership. After working as a social worker for several years, Dr. Harris joined VCU in 1967 as one of the first three African-American faculty hired. She quickly rose through the ranks in the School of Social Work before being named Vice Provost for Continuing Studies & Public Service to advance community-university relations. In 1993, she was named Provost and Vice President for Academic Affairs (the first African American and first female). Following her retirement in 1999, The Grace E. Harris Leadership Institute was established by the Board of Visitors, providing development opportunities for more than 1,000 leaders since its inception. Also active in community organizations in the Richmond area and across the state, Harris served on numerous boards, task forces and commissions, including as a founding board member of the Richmond Women's Bank and an advisory board member for the Virginia Health Care Foundation. Dr. Harris was a visionary whose influence reached beyond the walls of VCU and into the greater Richmond community and the Commonwealth.