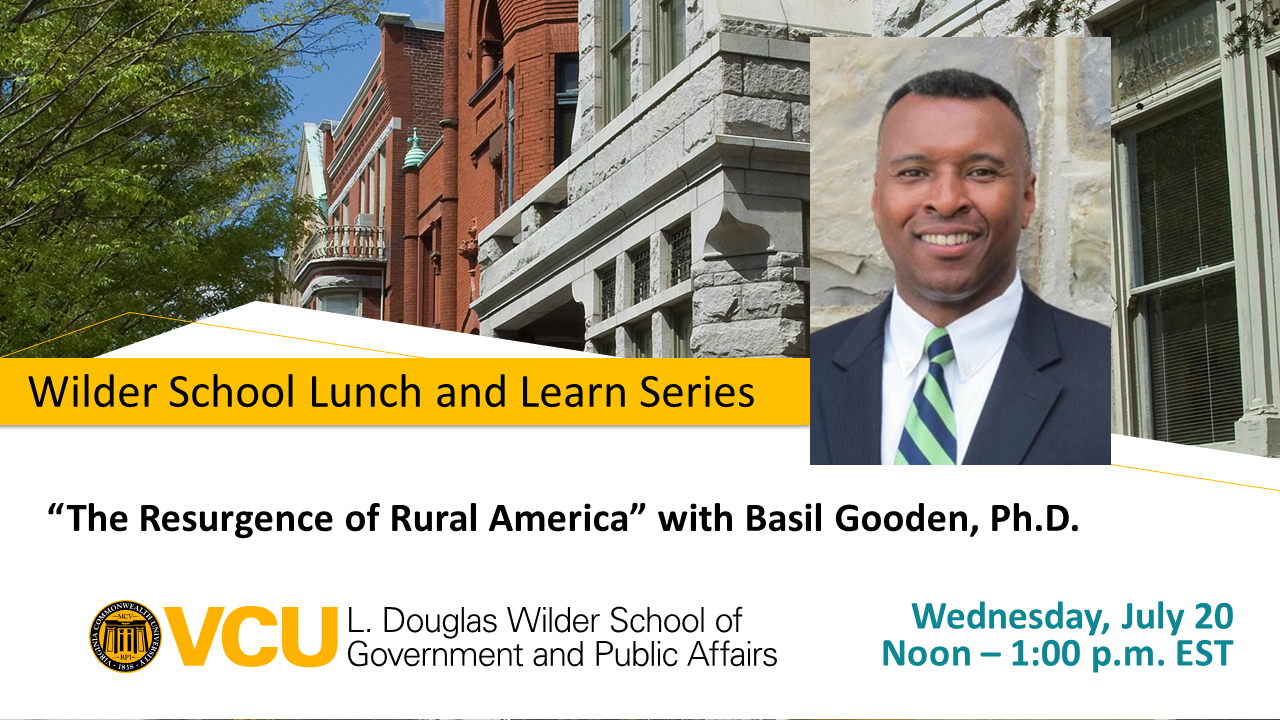 One in five Americans now lives in a small town. An unexpected result of the pandemic has been a steady increase in talent moving to rural areas as people reexamine their values, connections to family and work-life balance. What is next in this resurgence of rural America? Join Basil Gooden, Ph.D., director of State Operations for USDA Rural Development, for a virtual discussion that examines the opportunities and challenges in areas of economic development, community-building and overall well-being in the transformation of what it means to live in rural America, now and in the future.

RVSP to join us on Wed. July 20 at noon for the Zoom presentation

Basil Gooden, Ph.D., was appointed in 2021 as director of State Operations for USDA Rural Development. He has spent his career advocating for rural economic prosperity, equitable food systems, agriculture policy, public health, and community and economic development. Prior to his current role, Gooden worked at VCU as a social work visiting scholar in the Sustainable Food Access Core of the Institute for Inclusion, Inquiry and Innovation (iCubed). In 2016, he was appointed to serve as the third secretary of agriculture and forestry for Virginia.

Gooden also served as the Virginia State Director for USDA Rural Development, working with the White House Rural Council, Virginia’s congressional delegation and members of Virginia’s General Assembly to address policy and regulatory issues directly impacting rural Virginia. From 2002-14, he served as the chief deputy director of the Virginia Department of Housing and Community Development, where he worked with diverse populations in low-income, high-poverty areas to create prosperous communities.

Prior to joining DHCD, Gooden worked at Virginia Tech as the coordinator of outreach and community relations. Additionally, he worked as an extension specialist with the Virginia Cooperative Extension. Some of his previous professional experiences include working as a legislative assistant to former U.S Rep. L.F. Payne of the 5th Congressional District of Virginia and serving as a legislative aide to former U.S. Sen. Charles Robb from Virginia. He has actively served as a board member of several statewide organizations, including the Virginia Agri-business Council, Council for Rural Virginia, Housing Virginia, EarthCraft Virginia, Preservation Virginia and the Virginia Cooperative Extension State Extension Leadership Council. He previously served as an adviser on the Buckingham/Cumberland County FSA County Committee.

This session will be moderated by Mike MacKenzie (M.U.R.P.’11/GPA), who leads the VCU Center for Urban and Regional Analysis and directs the Land Use Education Program. Most recently, he contributed to Richmond’s strategic plan for Equitable Economic Development, estimated the economic impact and contributions of passenger rail improvements in the Richmond region, and served on the Virginia Marijuana Legalization Workgroup. Before joining VCU, he was a researcher at Housing Opportunities Made Equal and led efforts in Virginia that contributed to a landmark settlement with Fannie Mae over discrimination in the maintenance of foreclosed homes in majority-Black and Latino neighborhoods. In addition to his VCU degree, he attended Virginia Tech and worked as a public radio reporter in Roanoke and Richmond through the 2000s.