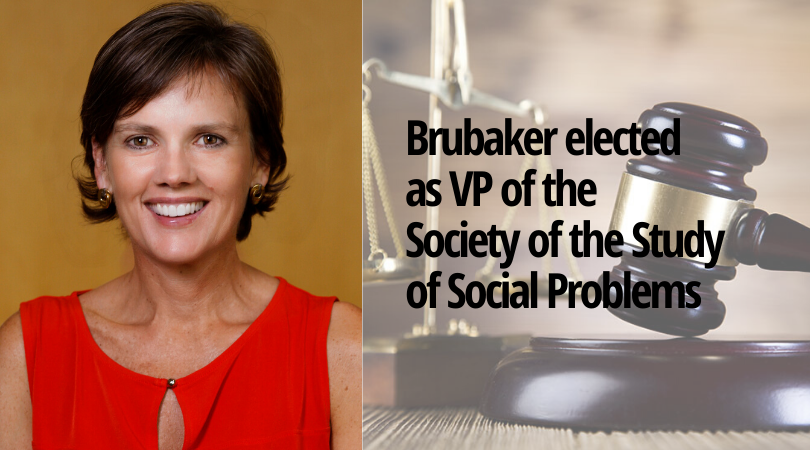 Sarah Jane Brubaker, Ph.D., professor in the Wilder School’s criminal justice and public policy and administration programs, was recently elected as the Vice President of the Society of the Study for Social Problems (SSSP).

Sarah Jane Brubaker, Ph.D., professor in the Wilder School’s criminal justice and public policy and administration programs, was recently elected as the Vice President of the Society of the Study for Social Problems (SSSP). An international professional organization, SSSP aims to promote sociological research and teaching on significant problems in social life. It also serves as a community for scholars, practitioners, advocates, and students to create and explore innovative approaches to addressing social problems.

Brubaker’s teaching, service, and research efforts at VCU complement her Vice President role well. In addition to teaching in multiple Wilder School programs, she also directs the Disrupting Criminalization in Education iCubed project, a transdisciplinary effort to explore the criminalization of trauma and exclusionary discipline as barriers to educational excellence among African American and Latinx children. She also created and directs the Graduate Certificate in Gender Violence Intervention, serves as chair of the Wilder School’s Diversity and Inclusion committee, and has received several federal and state grants to improve efforts to prevent sexual and domestic violence on college campuses.

“I’m thrilled to have been elected to this role,” said Brubaker, “and I’m excited to continue working to address some of the most pressing issues that society is facing today. Through the efforts of SSSP, along with the work that we’re doing at VCU, we can play a leading role in creating a society that strives for equity and justice and that centers those at the margins.”

Prior to being elected Vice President, Brubaker served as a member of the SSSP Board of Directors. She has also worked to develop the Society’s sexual harassment policies as chair of its anti-harassment committee, and won its first annual Kathleen S. Lowney Mentoring Award in 2017.