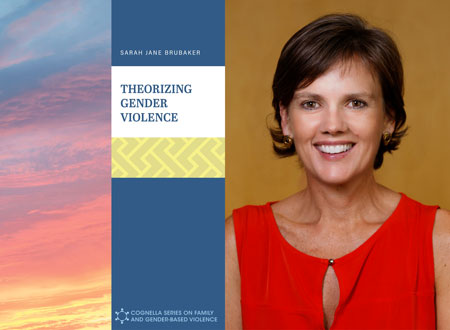 The book examines multiple types of gender violence, including physical, psychological, emotional, and sexual, as well as a range of contexts of violence, including domestic violence, campus sexual assault, stalking, and more. The work also emphasizes feminist theory and demonstrates how other theories have supported or challegned eminist theory to shape and enrich various approaches to and perspectives regarding the subject.

Each chapter examines theories commonly used by researchers and practitioners, including Johnson’s typology, male peer support theory, intersectionality, queer theory, ecological frameworks and routine activities theory. For each, students read a vignette, learn the background of the theory, examine the theory through application of an analytical framework developed by Brubaker, and then engage more deeply with the material through reflection questions, a case example, and a reflection contributed by a scholar in the field. The contributors include leaders in the field including Michael Johnson, Walter DeKeseredy, and Sharyn Potter.

The text concludes by summarizing the theories, identifying their similarities and differences, and discussing the current state and the future of the field.

Brubaker taught undergraduate and graduate sociological theory for many years before she began to teach the seminar that inspired the name for the book, Theorizing Gender Violence (TGV). This course is required for students enrolled in the Certificate in Gender Violence (CGVI) degree, co-created by Brubaker and Gay Cutchin in 2004.The CGVI has matriculated close to 100 students over the years, most of whom work in the field of gender violence. The TGV course was initially developed by Diana Scully, VCU Professor Emeritus of Sociology and founding chair of the Department of Women’s Studies. Scully was Brubaker’s thesis advisor when she earned her master's in Sociology from VCU.

Both the course and the book draw on Brubaker’s experience teaching theory, conducting research on gender violence, and collaborating with community partners to prevent and respond to violence. She invited several students from the Wilder School’s doctoral program to contribute to the book, including Brittany Keegan, Tammi Slovinsky and Jessica Smith. Brubaker was herself invited to write the book by Claire Renzetti, a leading scholar in the field of gender violence and editor of the journal “Violence Against Women.” Renzetti is editor of the Cognella Series on Family and Gender-Based Violence, an interdisciplinary collection of textbooks featuring cross-cultural perspectives, cutting-edge strategies and interventions, and timely research on family and gender-based violence; Brubaker’s book is the first in this series.