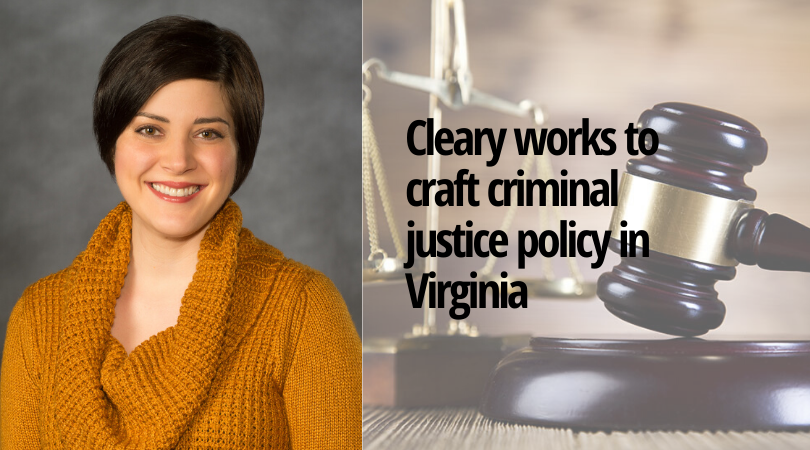 Hayley Cleary, Ph.D., an associate professor of Criminal Justice and Public Policy at the Wilder School.

Hayley Cleary, Ph.D., an associate professor of Criminal Justice and Public Policy at the Wilder School, has spent her academic career studying the intersection of social science, law, and policy as she examines the experiences of youth in the criminal justice system. Today, she’s working to turn this research into public policy in Virginia.

“Everything I do is applied research,” said Cleary. “My roots are in developmental and community psychology. I believe researchers should engage with the community to collaboratively come up with research questions that have meaning and implications for that community—to do research that makes your corner of the world a better place.”

Following her desire to ensure that her work has real-world impacts, Cleary applied and was accepted to the Center for Public Policy’s Translational Research Fellows (TRF) program. This program connects faculty members from across VCU with state and local policymakers interested in learning more about the Fellow's research area, with the hope that the faculty research will inform policies created and/or supported by the policymaker.

“I’d previously been doing back-end work, and the TRF program provided a mechanism to directly connect with policymakers,” said Cleary. “The program brings researchers and scientific evidence to the forefront, which is where we need to be. We have the data. It gives us a seat at the table and amplifies our voice, which is really critical to making evidence-based policy.”

Cleary’s work in the TRF program focused on the electronic recording of police interrogations. Specifically, she recommended that all Virginia state law enforcement agencies be required to electronically record any custodial interrogation conducted in a place of detention. Through the program, Cleary worked to develop a one-page policy brief that included an overview of her policy recommendations and the benefits of implementation. These benefits include a reduction in allegations of police misconduct, increased transparency during interrogations, and greater courtroom efficiencies through fewer “swearing contests” between police and defendants over what happened in the interrogation room.

She was then connected with Senator Jennifer McClellan and, for the past 18 months, has worked with Senator McClellan on Senate Bill 730. This bill would require law enforcement agencies to electronically record custodial interrogations.

“Similar bills had been proposed in the past, but they hadn’t gone anywhere for many reasons,” said Cleary. “When Senator McClellan and I were connected through the TRF program, we realized that more conversations with stakeholders were needed to make sure all concerns were addressed in any proposed legislation. Everyone’s voice needs to be heard, and we had to come up with a version of this bill that everyone could live with. In Fall 2019, we met with police and attorney stakeholders to discuss their concerns about the bill, and then I suggested modified language to revise the bill and satisfy those concerns while retaining efficacy of the bill.”

In February 2020, Cleary testified about the bill before the Senate Judiciary Committee. Her testimony was compelling, and the bill was combined with another similar piece of legislation. That bill then reported out of committee, passed the Senate unanimously, and is now being considered by the House.

“What I’m most excited about is Virginia joining this movement. It’s really big deal for Virginia,” said Cleary. “We know that electronic recording of interrogations is a best practice; it’s recommended by leading police agencies and by national attorney organizations. It’s been adopted at the federal level, so it’s a big step for due process as it helps us to ensure that suspects‘ rights are being respected and criminal justice actors are following the rules. It’s also a really big step for the innocence movement, because when cases of alleged false confessions arise it’s the recording that helps interrogation experts evaluate the interrogation and identify risk factors for false confessions. It’s a win, win, win.”