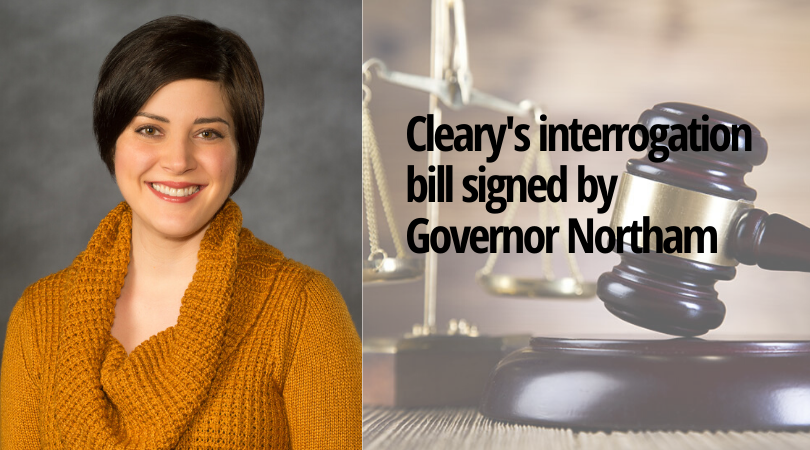 Hayley Cleary, Ph.D., an associate professor of Criminal Justice and Public Policy at the Wilder School's bill, HB1023, passed the House and on April 11, Governor Northam signed it into law.

For the past year and a half, Hayley Cleary, Ph.D., an associate professor of Criminal Justice and Public Policy at the Wilder School, has worked with Senator Jennifer McClellan to gain support for a bill that would mandate all Virginia state law enforcement agencies to electronically record custodial interrogations conducted in a place of detention. Cleary and McClellan were introduced through the Wilder School Center for Public Policy’s Translational Research Fellows Program, which connects Virginia’s policymakers with VCU faculty members with the hope that the faculty member’s research will inform policies created and/or supported by the policymaker.

Cleary testified before the Senate Judiciary Committee in February 2020 to gain support for the bill, which later passed in the Senate unanimously and was then considered by the House. Shortly after, Cleary learned of a potential roadblock – a $4 million impact statement had been added in the bill, which could make implementation cost prohibitive.  Cleary and McClellan quickly worked to identify a solution.

“Senator McClellan and I provided data to suggest that the $4 million price tag was probably an overestimate, and to show that the actual fiscal impact was pretty minimal,” said Cleary. “The Innocence Project had done a survey of police departments across two states that had already implemented a recording requirement, and it found that most police departments had very little, if any, fiscal impact. They often used existing equipment such as body cams so that they didn’t have to make new purchases. If they did have to purchase new equipment or data storage, the cost was typically low.”

Delegate Les Adams, who carried the House version of the bill, was also eager to find a solution to the fiscal issue. At his request, Cleary connected with the Virginia State Police (VSP) to work out a solution. Upon learning that part of the $4 million cost estimate was due to state encryption requirements, Cleary and VSP worked to ensure that an exemption was added to the bill that would allow data to be stored in a different, yet still secure, way. Now that barriers to implementation had been removed, the bill could once again be considered.

The bill, HB1023, passed the House and on April 11, Governor Northam signed it into law.

“I am elated,” said Cleary. “It’s exciting to see Virginia do the right thing. Other states are moving in this direction. The great thing about this legislation—and what makes it different from a lot of other policy initiatives—is that stakeholders all agreed that recording is a good idea. There wasn’t a lot of infighting among stakeholders themselves, we just had unexpected barriers to implementation where things could have gotten derailed. But we made it happen, and I’m enormously grateful to Senator McClellan, Delegate Adams, and their staff for seeing this issue to the finish line.”

Looking ahead, Cleary plans to continue this line of research with a focus on state-level policies for conducting juvenile interrogations. Through this work, Cleary aims to understand the national policy landscape having to do with parents in juvenile interrogations, and to use this to continue improving criminal justice policies in the commonwealth.