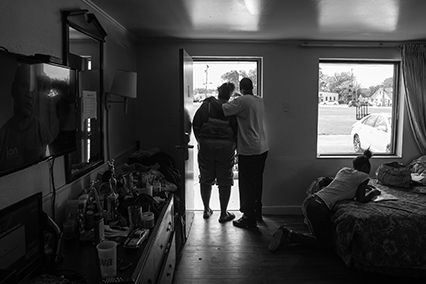 Richmond resident Jeffrey's struggle to find stable housing for his family after an eviction was also shared in the On The Media series The Scarlet E. (Photo: Crixell Matthews/VPM)

In conjunction with Virginia Commonwealth University’s 2019 Common Book, “Evicted: Poverty and Profit in the American City,” the L. Douglas Wilder School of Government and Public Affairs at VCU will host a panel discussion on eviction policy and the impact of housing instability.

The panel, “Eviction Beyond the Numbers: Community Impacts and Policy Landscape of Housing Instability,” will be held from 5 to 6:30 p.m. on Thursday, Sept. 26 at the W.E. Singleton Center for the Performing Arts, 922 Park Ave. The event is free and open to the public. Registration is encouraged but not required. Event sponsors include the VCU Wilder School, University College and VPM.

“As the region’s leader in rigorous analysis on the critical issues that drive and perpetuate income inequality, the Wilder School is pleased to host this event hearing from diverse constituents including community members, advocates, scholars and policy makers,” said Jill Gordon, Ph.D. Gordon is the associate dean for faculty and academic affairs at the VCU Wilder School and the lead organizer of the event.

“Richmond and several of its neighboring localities—including Hampton, Newport News, Norfolk and Chesapeake—face significant challenges around affordable housing, eviction and homelessness prevention. Our hope is that the public dialogue generated by this presentation will be a catalyst for driving solutions in the Commonwealth.”

The event will also feature a presentation from RVA Eviction Lab co-founders and Wilder School faculty members Kathryn Howell, Ph.D. and Benjamin Teresa, Ph.D. The RVA Eviction Lab, housed within in the Wilder School, was created in 2018 to study evictions in the Richmond area and support the work of local government, community-based organizations, elected officials and other advocates.

The panel discussion will be held ahead of a public lecture by Matthew Desmond, author of “Evicted,” at 6 p.m. on Oct. 16 at the Stuart C. Siegel Center, 1200 W. Broad St.

“Evicted” is an ethnographic study that follows eight families in Milwaukee as they struggle to keep their homes while falling deeper into poverty. It shows the impact of the nationwide eviction crisis that affects millions of families and has consequences for poverty, homelessness, educational disparities and health care.

Desmond, a Princeton University sociologist, founded the Eviction Lab at Princeton, which built the first nationwide database of evictions and that determined Richmond had the second-highest rate of evictions in the country in 2016. Four additional Virginia cities, Hampton, Newport News, Norfolk and Chesapeake, were in the top 10.

The book was distributed to all first-year VCU students over the summer, and was also read by much of the wider campus and Richmond community. The Common Book program of VCU’s University College seeks to welcome new students to the vibrant intellectual culture of VCU and to provide them with an opportunity to explore complex social issues through an interdisciplinary lens.