Virginians Evenly Divided on the Idea of Armed Teachers 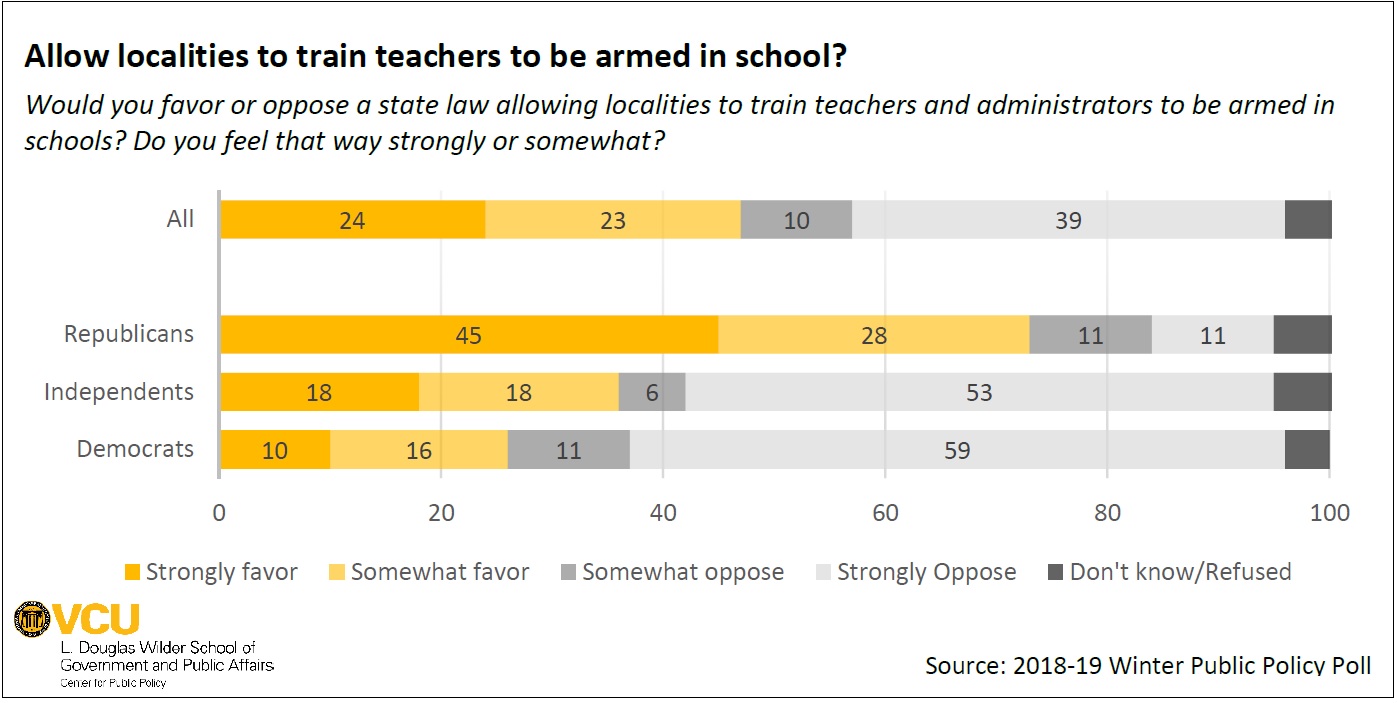 Virginians are almost evenly split between favoring and opposing a state law that would allow localities to train teachers and administrators to be armed in schools, according to a new poll by the L. Douglas Wilder School of Government and Public Affairs at Virginia Commonwealth University.

“Opening the door to localities arming teachers is one policy that legislators have floated and will debate in the coming legislative session,” said Robyn McDougle, Ph.D., director of the Wilder School’s Center for Public Policy. “These findings make it clear that Virginians are evenly divided on the issue, and that a person’s political perspective and location in the commonwealth are key factors in how many see the issue.”

The question mirrored a similar question in the Wilder School’s 2018 Summer Public Policy Poll that asked about “objects that could be used as weapons” rather than firearms. Changing the wording in the winter poll decreased the portion of respondents who said prioritizing public safety should be the most important concern from 75 percent when considering “weapons” to 62 percent when considering “guns and firearms.”

When asked about their views on causes of higher rates of gun violence in urban areas, a larger number of respondents said the higher rate was connected to easy access to firearms (53 percent) or to the individual decisions of those living in urban areas (60 percent). A smaller number of respondents (36 percent) believed that higher rates of gun violence are connected to people living closer together.

Those who felt that gun violence was connected to easy access to firearms were more likely to be women (60 percent compared to 45 percent of men) and Democrats (73 percent compared to 48 percent of independents and 35 percent of Republicans). Respondents who agreed that easy access was a cause of higher rates of gun violence were also more likely to have lower levels of household income — under $50,000 (60 percent), compared to over $100,000 (48 percent) — and to live in Northern Virginia (57 percent), the South Central region (56 percent) and Tidewater (56 percent).

Those who responded that gun violence was connected to people living closer together were most likely to be independents (50 percent), while Democrats and Republicans were more likely to disagree. Those living in the South Central region (52 percent) were more likely to agree.

For a PDF of the 17-page report, including complete question wording and detailed tables of results, go to oppo.vcu.edu/policy-poll/.