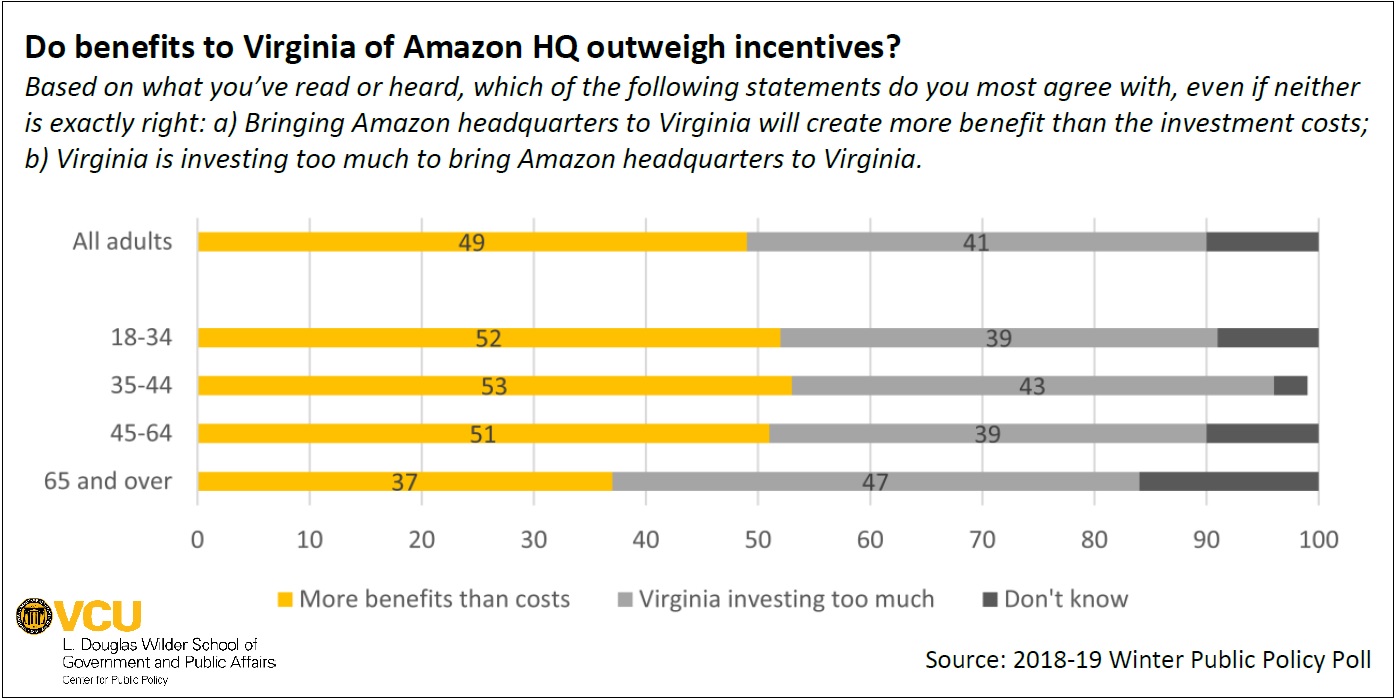 Just under half of Virginians say bringing one of Amazon’s second headquarters to the state will create more benefits than the investment costs, while 41 percent believe the state is investing too much in the deal, according to a new poll by the L. Douglas Wilder School of Government and Public Affairs at Virginia Commonwealth University.

A narrow plurality of 49 percent agree that the benefits outweigh the incentives to bring half of HQ2 to Northern Virginia (the other half will be located in New York). Older Virginians are more skeptical of the deal, with 37 percent thinking benefits will outweigh costs, compared to 47 percent who say Virginia is investing too much. For younger cohorts, just over 50 percent see benefits outweighing costs.

“This close split could indicate that the more Virginians hear about the Amazon deal, the less confident they are that it’s a win for Virginia,” said Robyn McDougle, Ph.D., director of the Wilder School’s Center for Public Policy, which conducted the 2018-19 Winter Public Policy Poll. “One poll conducted shortly after the November 13 Amazon announcement showed Virginians approving the deal by a 2-to-1 margin, but this margin is significantly lower.” 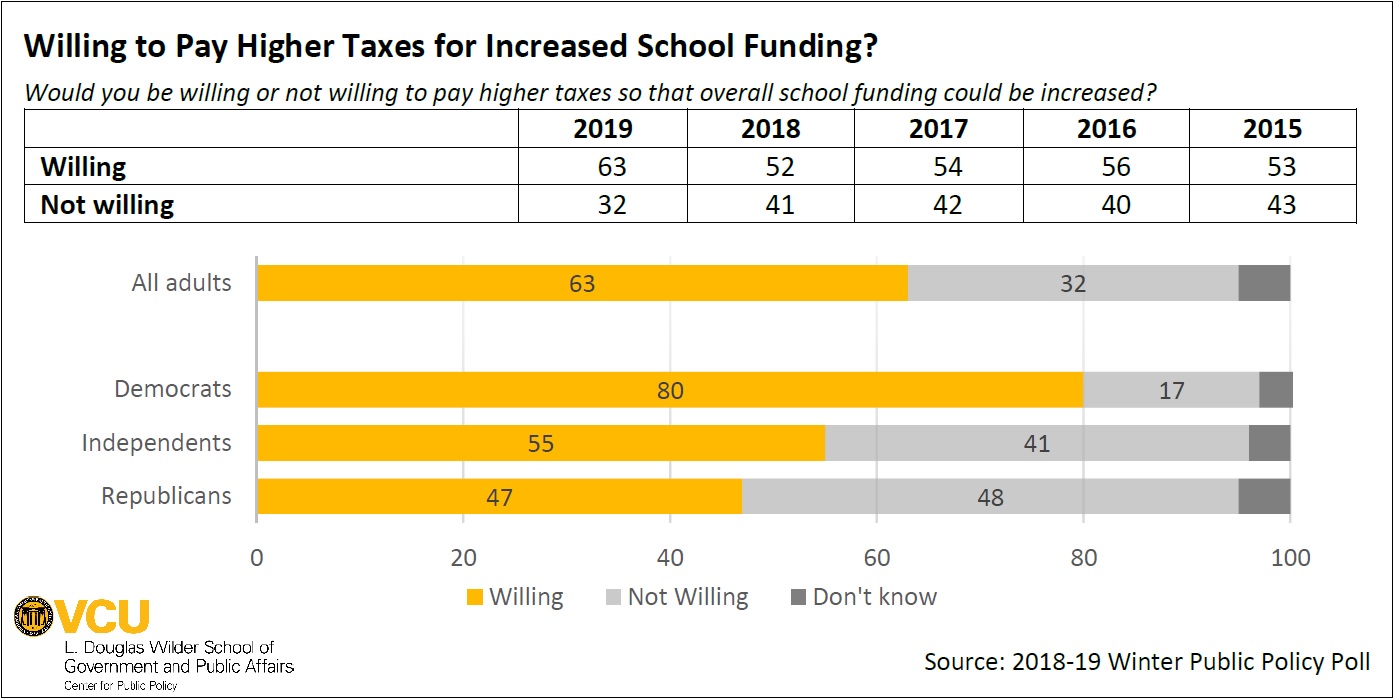 Additional findings of the poll show that a clear majority of the public not only supports additional money for public schools, but also would be willing to pay part of the bill through increased taxes.

Sixty-three percent of Virginians indicate a personal willingness to pay higher taxes to increase funding for K-12 education, while 32 percent say they are not willing to do so. The proportion willing to pay higher taxes for this purpose is up 11 percentage points from last year, making it the largest year-to-year jump and the highest percentage measured in the 16 years the poll has asked the question.

Democrats (80 percent) are more likely to be willing to pay higher taxes than Republicans (47 percent), while independents (55 percent) fall between the two.

The poll showed that 63 percent would be willing to pay more taxes to see school funding increased, with 70 percent of Virginians feeling that current funding for public schools is not enough to meet existing needs. Women (75 percent) were more likely than men (64 percent) to think funding for schools was not enough. 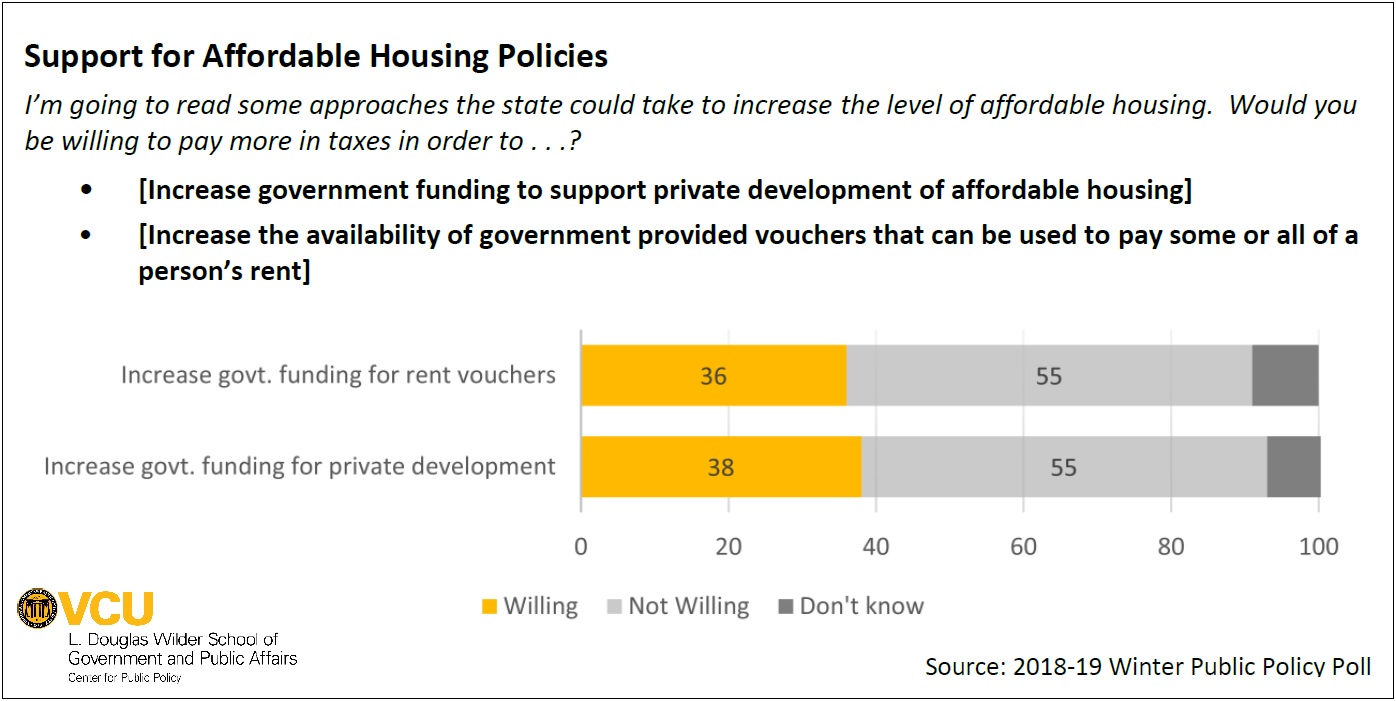 Respondents also were asked whether they would be willing to pay more in taxes to increase the use of two policies aimed at improving access to affordable housing: government support for private development of such housing, and government support for housing vouchers that can be used to pay some or all of a person’s rent. A majority of 55 percent were not willing to pay more in taxes in both cases.

Regional breakdowns showed the Northwest and South Central to be the least willing to pay more taxes for private development (62 percent not willing). The Tidewater region (at 63 percent) was least willing regarding vouchers.

For a PDF of the 17-page report, including complete question wording and detailed tables of results, go to oppo.vcu.edu/policy-poll/.