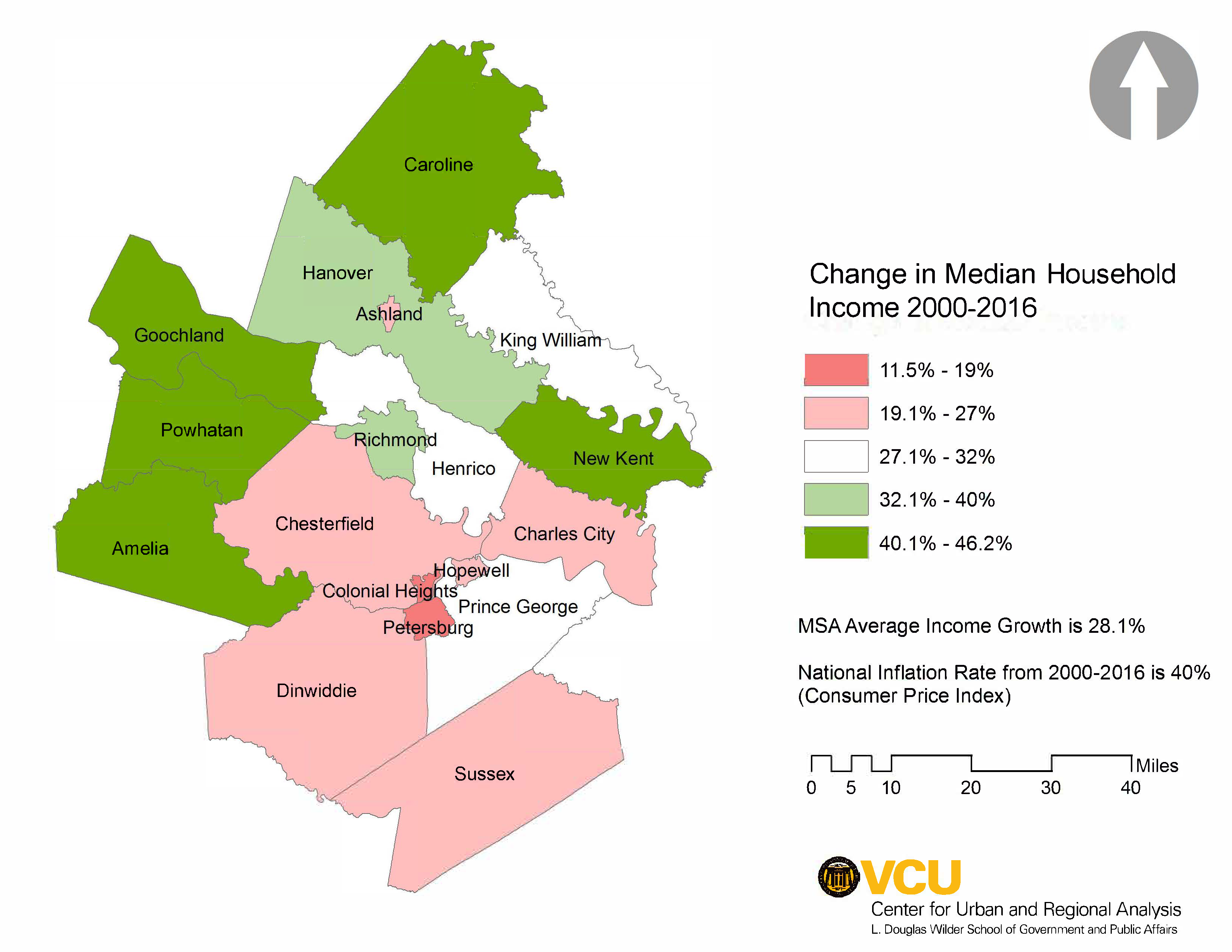 The city of Richmond and the region’s outer counties led the area in the growth of median household income between 2000 and 2016, according to a new report by the L. Douglas Wilder School of Government and Public Affairs at Virginia Commonwealth University.

“A New Income Growth Pattern in the Richmond Metropolitan Area,” prepared by the Wilder School’s Center for Urban and Regional Analysis, shows how traditional patterns of development, both residential and commercial, have changed significantly and pose particular challenges to suburban counties.

“This report confirms a long-term trend of urban improvement and aging suburban decline,” said Tom Jacobson, CURA’s lead researcher and an adjunct professor at the Wilder School. “This trend is slow and insidious and requires significant attention from suburban leaders.”

From 2000 to 2016, income growth in the city of Richmond increased by 32.3 percent, compared to 29.5 percent and 26.2 percent, respectively, in neighboring Henrico and Chesterfield counties—the region’s traditional suburban centers of economically prospering households.

“National trends of increasing baby boomer and millennial generation interest in urban living are contributing to Richmond’s population and income growth,” the report found. “So, too, are the revitalization efforts of Richmond and their experienced nonprofit organizations.”

The report covers the 18 localities that form the Richmond Metropolitan Statistical Area. The region had an overall household income gain of 28.1 percent between 2000 and 2016. The northern localities in the region had significantly higher income growth than those in the southern portion. 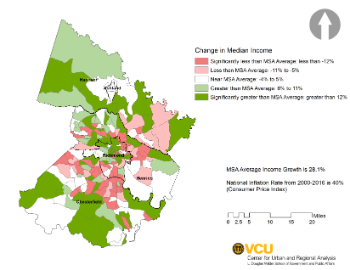 The Tri-Cities and surrounding area present a different picture.

One factor in the weakness of suburban income growth could be the rise in retired heads of households, the report suggests. The analysis showed no statistical correlation between a rise in percentage of senior household heads and lower income growth at the census tract level.

However, several neighborhoods in the middle-income areas of Chesterfield’s northern and central areas and Henrico’s West End had a significant increase in senior heads of households.

It's important to understand the income gains in terms of comparative buying power, the report states. Between 2000 and 2016, the U.S. Bureau of Labor Statistics Consumer Price Index—an index of the prices paid for typical consumer goods and services—rose 40 percent, which translates to a decrease in purchasing power.

"That stresses community maintenance and business health, as well that of households," Jacobson said.