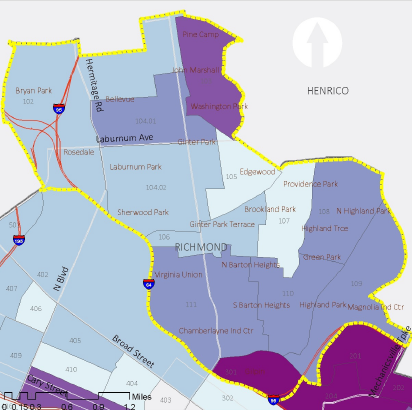 The Wilder School’s Center for Urban and Regional Analysis within the Center for Public Policy recently conducted a study to map indicators of distress for Richmond’s Northside neighborhoods.

To gather data, the CURA team collected relevant socioeconomic and children’s health and education data from public sources, mapped the information, and conducted statistical comparisons between the city of Richmond and the city’s Northside. They also conducted comparisons among different neighborhoods in Northside. The analysis was conducted at the census tract level using CURA’s MetroView information and analysis system, which provides a holistic yet detailed picture of technical and social qualities of the Richmond Metropolitan Area. CURA prepared the report for the Robins Foundation and Communitas Consulting.

“We found that the Richmond Northside lags behind the rest of the city in almost all socioeconomic, health, and children-related metrics,” said Sarin Adhikari, Ph.D., CURA’s research economist.

“The indicators also vary among the Northside neighborhoods with differences that show a visible geographic divide between the western side and the eastern side. The differences seem to be strongly correlated with race and income characteristics of the neighborhoods. This level of granular analysis was possible due to CURA's MetroView database.”

Specific findings from this study included:

By identifying these and other areas of distress, the study identifies baseline measures against which change can be measured, helping to create a path forward for Richmond’s leaders, policymakers and community members to begin addressing the needs of the Northside community.