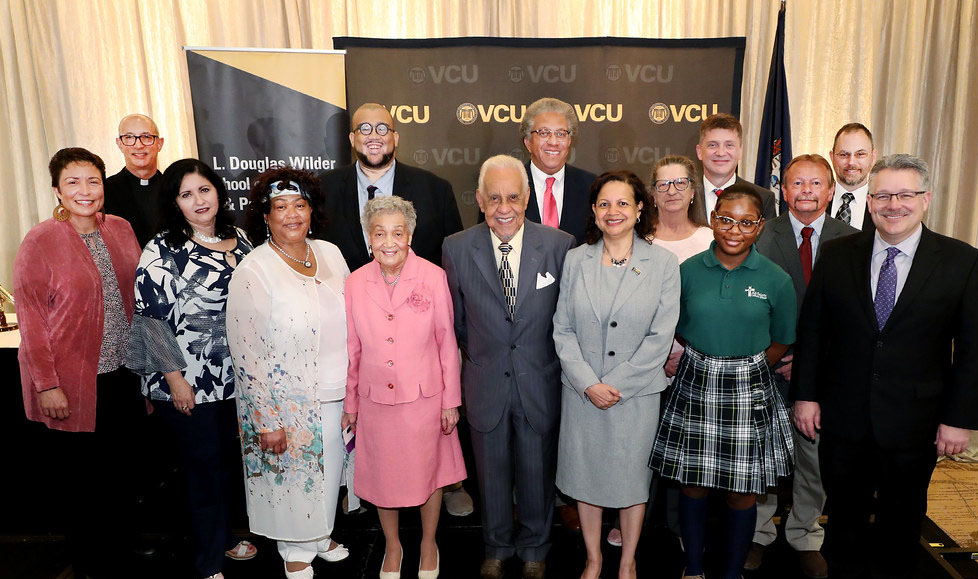 On Tuesday, April 26, the 15th Excellence in Virginia Government Awards returned in person at the Downtown Richmond Marriott. The L. Douglas Wilder School and VCU leadership proudly celebrated key Virginian public servants who have made noteworthy contributions to the practice of government and the welfare of our communities and citizens.

Wilder School Dean Susan Gooden gave opening remarks, sharing her enthusiasm for a return to in-person awards. She thanked the approximately 300 guests in attendance for their support for the event, which raises funds for student scholarships.

VCU President Michael Rao spoke about the lasting impact that the Wilder School creates for its students, researchers and alumni. He highlighted the importance of building community relationships in Richmond and throughout Virginia. Rao applauded the growing national reputation of the Wilder School as noted by U.S. News & World Report.

66th Governor of Virginia L. Douglas Wilder addressed the importance for public service in demanding change. He expressed his support for the Wilder School's recently created Research Institute for Social Equity and the need for additional resources to continue to improve access to outcomes that advance and promote equity and opportunity for all citizens.

Below is more information on our 2022 award recipients.

Florence Neal Cooper Smith is honored for her unrelenting efforts to educate and find a cure for sickle cell anemia.

Sickle cell is an inherited disease that impacts an estimated 100,000 people in the United States, 90% of whom are African American.  In Virginia, Florence Cooper Smith has been a tireless leader, increasing awareness of sickle cell disease and raising tens of thousands of dollars to improve treatments and develop a cure. Cooper-Smith’s devotion to finding a cure includes years of community-based education and legislative work in Virginia as well as national networking through the National Institutes of Health and the U.S. Department of Health and Human Services.

About the award: This award recognizes an individual Virginian whose career represents the highest values of public service and citizenship and who has made a substantial contribution to the good of the commonwealth.  The recipient must be an individual whose personal or professional contributions span a minimum of 20 years and be a resident of Virginia.

When it became apparent early in the pandemic that Latinos had very low vaccination rates and were disproportionately being hospitalized and dying from COVID-19, Richmond’s Sacred Heart Center, with the support of several foundations, stepped in to educate and help vaccinate the region’s Latino community. This lifesaving work has helped the Latino vaccination rate grow above 80%, the highest in the Richmond region. The Sacred Heart Center is Richmond’s premier Latino community center, providing education and support programs across the region, including a food bank, educational classes for adults and youth, and a wide variety of human and social service programs.

About the award: The Community Enhancement Award recognizes outstanding commitment to improving the quality of community life in Virginia. An individual, group or government entity may be nominated for this award.

All Saints Catholic School of Richmond

All Saints Catholic School of Richmond is recognized for its work to prepare students for profound success in high school, college and throughout their adult lives as highly engaged leaders in a diverse, democratic society.

All Saints Catholic School serves about 200 pre-K to eighth-grade students in the Richmond area, fostering a culturally, socio-economically and ethnically diverse student body. All Saints prides itself in developing students’ leadership skills, confidence and integrity. The school’s seniors boast a 100% high school graduation rate, with a large majority of alumni continuing on to college.

About the award: Named after the late Dr. Grace E. Harris, a trailblazer who broke down many barriers as an African-American woman and whose vision and leadership had tremendous impact at VCU, in the community and beyond. This award recognizes an individual or organization that has made a discernible, sustainable positive impact on the quality of life in Virginia through public service.

Moton Museum of Farmville, Virginia is recognized for its ongoing efforts to promote dialogue and serve future generations as an education center and policy center for the study of civil rights in education.

Farmville's former Russa Moton High School, now a National Historical Landmark and museum, preserves and constructively interprets the history of civil rights in education, specifically as it relates to Prince Edward County and the leading role its citizens played in America’s transition from segregation toward integration. The Moton Museum strives to promote dialogue and advance positions that ensure empowerment within a constitutional democracy through community events, educational outreach and providing resources for K-12 students and teachers.

About the award: Named for two champions of civil rights, attorney Oliver Hill and Judge Spottswood Robinson, this award recognizes a sustained commitment to securing equal rights and justice for all people by empowering citizens.  An individual or an organization may be nominated for this award.

Danville Police Chief Scott Booth is praised for his community policing work including the Community Leadership and Immersion Program (CLIP) for new officers and Pass the Perspective program for citizens.

When Chief Scott Booth came to the Danville Police Department in 2018 he made his top two priorities the reduction of violent crime and community engagement. Crime numbers have decreased and the relationships and trust have grown in the community. Booth introduced the Community Leadership and Immersion Program (CLIP) as part of new officer training and the Pass the Perspective program for residents to learn more about policing. Both programs have had a profound impact on Danville community’s relationship with police.

About the award: This award recognizes the recipient’s innovative work has resulted in increased efficiency, effectiveness, or other improvements that affect how a government entity performs, in supporting and delivering services to its constituents. An individual, organization or government entity may be nominated for this award.

Grayson County with Appalachian Power and GigaBeam Networks is recognized for their work to bring high-speed internet to the county through innovative partnerships.

A lack of fast and reliable internet was causing Grayson County to lose residents, limiting its economic development potential and restricting health care options. That changed in 2019 after a new law went into effect permitting Virginia's two largest electric utilities to provide broadband capacity to nongovernmental internet service providers in underserved areas. Appalachian Power selected Grayson County for their pilot program, and in partnership with GigaBeam Networks, has installed nearly 150 miles of fiber in the rural county, with a total of 250 miles planned.

About the award: This award recognizes the recipient’s inventive creation or maintenance of a successful public-private partnership which has delivered a measurable improvement in public service resulting in lower cost, improved quality, or greater efficiency for citizens. An individual, business, local or state government agency or other entity may be nominated.

Betty Mattice, a 50-year employee of DMV, has an unsurpassed dedication to the agency as its IT manager.

For 51 years Betty Mattice has dedicated herself to becoming an expert in the systems and processes that keep the DMV operating smoothly. As DMV’s Information Technology manager, Betty oversees software system and business requirements, as well as managing a help desk staff that provides assistance to field employees and DMV partners. IT issues don't conform to office hours, and neither does Betty. Her dedication to the agency runs so deep that she has a cot in her office to ensure she is present in the event of bad weather or to work nights and weekends.

About the award: The Unsung Heroes Award recognizes an individual Virginian who has provided distinguished and exceptional service as a career government employee in the commonwealth, with local or state government. The recipient must have significant longevity of public service to the commonwealth and be a resident of Virginia.