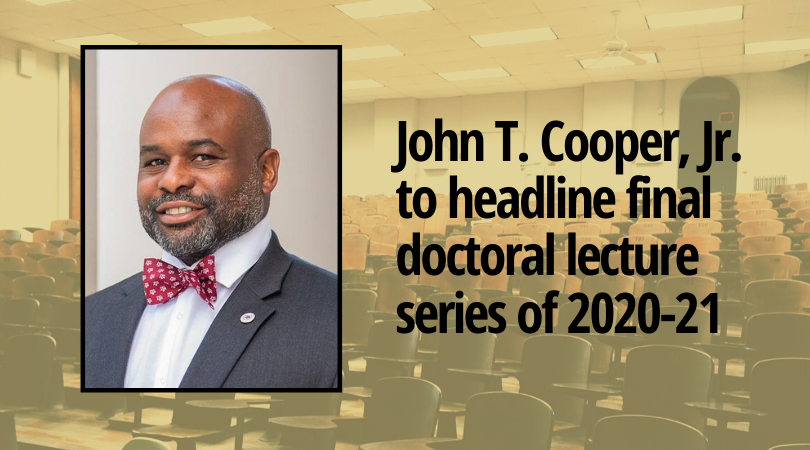 The final lecture in this academic year’s Wilder School Doctoral Lecture Series in Public Policy will take place virtually on Tuesday, April 20 and feature John T. Cooper, Jr., Ph.D., Assistant Vice President for Public Partnership & Outreach and a professor of the practice in the Department of Landscape Architecture and Urban Planning at Texas A&M University.

The lecture series gives doctoral students the opportunity to learn from and engage with leading scholars in a variety of fields related to public policy. Four speakers will participate during the 2020-21 academic year, two in each semester. The lecture series is geared to graduate students, faculty and alumni of our Ph.D. program, and it is open to public.

Cooper’s talk will be entitled “Public in Engagement in Planning Research and Practice.” The lecture will take place virtually via Zoom from 11:00 a.m.-12:15 p.m.

Dr. Cooper earned a bachelor’s degree in Economics as well as his Master’s in Urban Planning from Texas A&M before completing a PhD in City and Regional Planning at University of North Carolina in Chapel Hill (UNC).  Dr. Cooper’s research and teaching focuses on participatory planning, particularly as it relates to preparing socially vulnerable populations to prepare for, survive and recover after disasters. From 2005-2010, he was a Program Director at MDC Inc. in Durham, NC, where he directed the FEMA-funded Emergency Preparedness Demonstration Program (EPD).  The EPD was a $2.5 million effort to increase disaster awareness and preparedness in marginalized communities in eight states along the Atlantic and Gulf coasts.

Dr. Cooper has served on the advisory board for the Coastal Resilience Center at the University of North Carolina and on the board of directors for the U.S. Endowment for Forestry and Communities.  Dr. Cooper is currently a member of the advisory council for the Center for Disaster Philanthropy and was recently named to the National Academies Board on Gulf Education and Engagement.