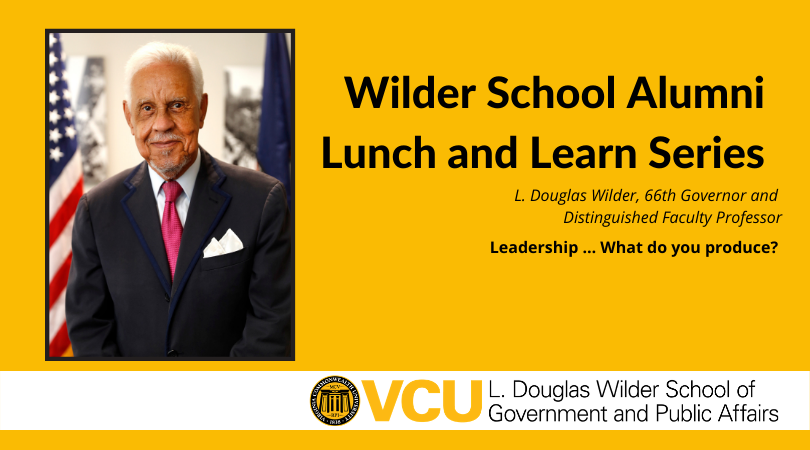 Join the L. Douglas Wilder School of Government and Public Affairs for a Lunch and Learn Zoom presentation featuring Governor L. Douglas Wilder, 66th Governor of Virginia and Distinguished Professor. This session, “Leadership... What do you produce?”, will be a reflection of leadership lessons learned during Governor Wilder’s lifetime in public service.

Wilder School Dean Susan Gooden, Ph.D., will serve as the session moderator. The event will be recorded and shared through email and the Wilder School YouTube channel.

Closed captioning through Zoom will be available during the session.

L. Douglas Wilder’s career in public service spans over 50 years and includes many historic milestones. Wilder became the first African-American to be elected governor in the U.S., leading the Commonwealth of Virginia from 1990 to 1994. As the Commonwealth’s 66th governor, he was commended for his sound fiscal management and balancing the state budget during difficult economic times. Prior to his time as governor, he served as lieutenant governor from 1986 to 1990 and as a state senator from 1969-1985. He was sworn in as Richmond’s first elected mayor in 2005 and served until 2009, making him the first African-American mayor elected by popular vote from the citizens of Richmond. An attorney by profession, Governor Wilder gained recognition as a leading criminal trial lawyer. He has degrees from Virginia Union University and the Howard University Law School, and established the legal firm that became known as Wilder, Gregory & Associates, one of the few minority-owned businesses in VA.