RICHMOND, Va. (Jan. 5, 2023) — Virginians were more likely to approve of how Gov. Glenn Youngkin is handling his job as governor of Virginia than to disapprove with 52% of respondents reporting approval and 32% reporting disapproval, according to the Commonwealth Poll conducted by the L. Douglas Wilder School of Government and Public Affairs at Virginia Commonwealth University.

Ahead of Virginia’s 2023 legislative session starting Jan. 11, Virginians’ top priorities for legislators are addressing inflation and focusing on the future of democracy in the U.S. Inflation, 37% of respondents say, should be the primary focus of the legislative session, with Republicans, households with school-aged children and Hispanic individuals showing the strongest support for the issue. More than 1 in 5 respondents (21%) want the legislature to focus on the future of democracy in this country, with Democrats, households with an annual income of $70,000 or higher and families who do not have school-aged children in the house showing the strongest support.

“Poll respondents feel that inflation needs to be dealt with and democracy ensured for our future,” said L. Douglas Wilder, who served as the 66th governor of Virginia.

More than half of respondents (53%) want to see Youngkin specifically intervene around the issues of inflation, education and crime during the convening of the 2023 General Assembly session. Of those wanting the governor to take action, a majority were African American (67%), Hispanic (66%) and between 18-34 years of age (65%).

“The poll results reflect a seeming increase in the disconnect or distrust between leadership and the people, and it is not partisan,” Wilder said. “The poll reflects that more needs to be done by leadership — administrative, legislative and gubernatorial — to address the salient issues that are being borne by the people in the commonwealth. The voters are looking for leadership to produce results for all Virginians.”

The Commonwealth Poll obtained landline and mobile telephone interviews from Dec. 3 to Dec. 16, 2022, with a representative sample of 807 adults living in Virginia. Full results can be found at oppo.vcu.edu/policy-poll. 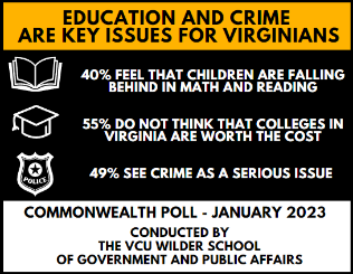 More than 4 in 10 Virginians believe school-aged students in their community are still falling behind their peers in other states in reading and math proficiency. Over 35% of respondents believe school-aged children are on track or ahead in reading and math proficiency compared to their peers in other states. Political affiliation, race and age had the strongest impact on views of educational performance. Republicans, African Americans and those 35-54 years old believe children are falling behind in math and reading, while Democrats, Hispanics and those 18-34 years old think that children are ahead or on track in math and reading proficiency compared to peers in other states.

“The poll results reflect a seeming increase in the disconnect or distrust between leadership and the people, and it is not partisan. The poll reflects that more needs to be done by leadership — administrative, legislative and gubernatorial — to address the salient issues that are being borne by the people in the commonwealth."
– Governor L. Douglas Wilder

“Virginians feel that our youngsters are not getting the basics of learning,” Wilder said. “Over 40% of respondents believe school-aged students are still falling behind their peers in other states in reading and math proficiency.”

“Over half of Virginians feel that an in-state college degree is not worth the cost,” Wilder said. “Tuition has increased at a rate that is no longer affordable for students and their families.”

“The poll results showing how crime is affecting our communities are outright alarming,” Wilder said. “The lack of confidence in localities dealing with these crucial issues is reflected by over half of those polled; 53% feel the governor has to get more involved with the issues relative to inflation, education and crime. Not surprisingly, a majority were African American (67%) and Hispanic (66%).”

An overwhelming majority (72%) of respondents see access to affordable housing as a serious issue in their community. Over 80% of African Americans, Democrats and those 18-34 years old identified housing as a pressing issue in their community. Even though Hispanics, men and Republicans had less support for affordable housing being an issue, over half of those respondents still identified it as a concern.

During the height of the COVID-19 pandemic, Virginia received federal money to provide free or discounted fares for public transportation. Of those polled, 6 in 10 Virginians support the state continuing to fund this public transit initiative. Similar to affordable housing views, over 70 % of Democrats, African Americans and those 18-34 years old were most supportive of funding free or reduced fares for public transit. While whites, male respondents and those 55 years and older were less supportive, more than 50% of those respondents supported the initiative.

The Commonwealth Poll Winter 2022, sponsored by Virginia Commonwealth University, obtained telephone interviews with a representative sample of 807 adults, ages 18 or older, living in Virginia. Telephone interviews were conducted by landline (201) and cellphone (606, including 388 without a landline). The data collection was conducted by Responsive Management from Dec. 3 to Dec. 16, 2022.

Statistical results are weighted to correct known demographic discrepancies. A two-stage weighting procedure was used to weight this dual-frame sample by the demographic characteristics of gender, age, education, race, ethnicity, Hispanic origin, region of residence, and personal phone use. The main geographic and demographic benchmarks were obtained from the 2017 American Community Survey (ACS). Weighting was accomplished using the Anesrake package, which implements the American National Election Study (ANES) weighting algorithm. The margin of error for the complete set of weighted data is ±5.81 percentage points.

The sample consisted of a combination of listed landline and cellular random digit dial samples. The overall sample was representative of the adult general population of Virginia who have access to either a listed landline or cellular telephone. Both samples were provided by Marketing Systems Group, a leader in providing research-based statistical samples. The cellular RDD sample was prescreened for disconnected numbers.

As many as seven attempts were made to contact every landline telephone number, and as many as five attempts were made to contact each cellphone number. Calls were made at different times of the day and on different days of the week to maximize the chance of contacting potential respondents. Response rates are computed according to American Association for Public Opinion Research standards. The response rate for the landline sample was 7.2%. The response rate for the cellular sample was 8.1%.