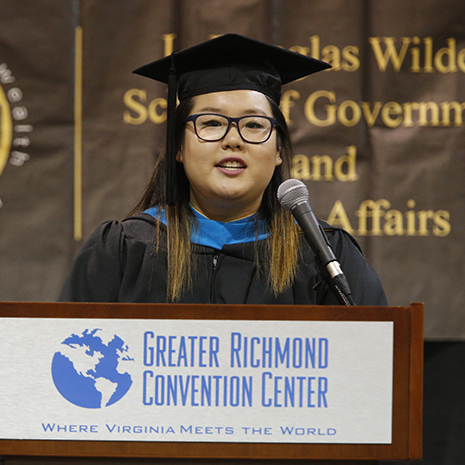 Sun Melissa Jun lives by the words she spoke at the Wilder School’s spring graduation.

“Passion and enthusiasm really can bring a person far in life,” she told the approximately 320 graduates and the many friends and family members who filled Exhibit Hall A in the Greater Richmond Convention Center. “If you have enthusiasm about your job, it’s not working if you’re doing what you love. As long as you have enthusiasm and passion, you’ll succeed.”

“The Wilder School is the best place for students to grow,” she said. “I blossomed. One reason why I accepted the job is I’ll be able to keep in touch with my professors,” such as Susan Gooden, Ph.D., professor of public administration and policy who’s currently president of ASPA.

Jun made the most of her time in the M.P.A. program, from which she graduated with a 3.7 grade point average. She was president of the Public Administration Student Association. She received the Outstanding Graduate Student Award. She was a Wilder Fellow, a prestigious honor that allows top graduate students to gain meaningful work experience and financial support. As a Fellow, she worked in the VCU Office of Development and Alumni Relations. Her supervisor was an M.P.A. alumnus, Blake MacIver.

“Being a Wilder Fellow was such a great opportunity. It helped me grow, and it was inspiring to work with so many great people,” she said.

Jun grew up in Northern Virginia and attended community college before transferring to James Madison University, where she earned her bachelor’s in public policy and administration.

“I like how it applies to all disciplines,” she said of the field. “There’s so much to learn; it’s never ending.”

After graduating from JMU, she worked in association management and then decided to join her best friend in Beijing, China, landing a job as a teacher at the International American School. Then she decided she wanted to pursue her M.P.A. and applied to the Wilder School.

The school’s urban location—in the state’s capital city, just blocks from the Capitol—and the opportunities to network helped draw her to the program.

“There’s always so much going on, and I like how VCU lets students pursue their passions and come to life,” she said.

Richard Huff, Ph.D., chair of the M.P.A. program, called Jun “a fine young scholar who always exceeds expectations” and said she personifies what the Wilder School looks for in graduate students.

“She works hard in her studies as evidenced by her grade point average, but she is also always willing to lend a helping hand in order to benefit the entire Wilder School,” he said.

“As president of the Public Administration Student Association, Melissa was instrumental in increasing student and faculty involvement in events, recognizing students for their accomplishments, and spotlighting alumni by organizing guest speaker forums.”

Jun and her younger sister, Sandy—who earned her undergraduate degree in fashion from VCU—are first generation college graduates. Their parents emigrated from Korea. “For my parents, this is really incredible.”