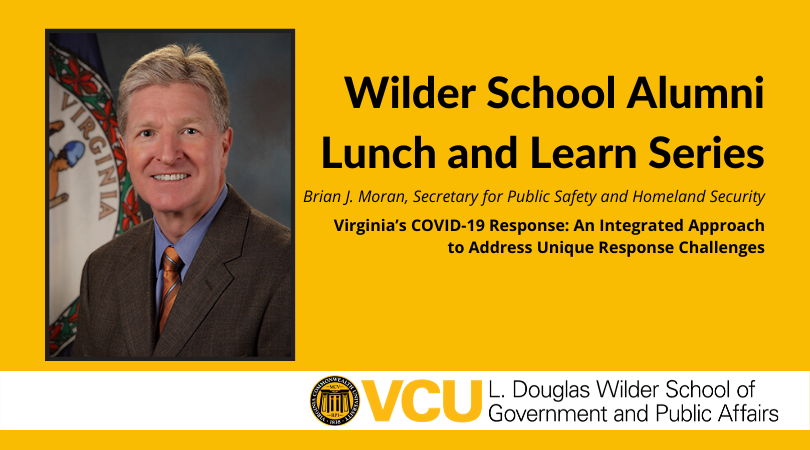 In his presentation, “Virginia’s COVID-19 Response: An Integrated Approach to Address Unique Response Challenges" the secretary described Virginia's multi-agency response to the COVID-19 crisis in which the commonwealth activated its pandemic response. Introductory remarks were made by Wilder School Dean Susan Gooden, Ph.D. while Associate Professor and Director of the Center for Public Policy Robyn McDougle, Ph.D. (M.S.‘00/GPA; Ph.D.‘03/H&S) moderated. View the video.

“The Wilder School has been dedicated to being part of the solution relative to both the pandemic and the social protests.” shared Dean Gooden. “We have hosted a number of events including research projects, presentations, webinars, podcasts and media interviews – all designed to keep our connection with our community.”

With several safety precautions set in place, Gov. Ralph Northam recently announced that the state of Virginia will move into Phase 3 beginning July 1.

"Wear your mask, social distance and use hand sanitizer and wash your hands – these are the three things we have been requesting throughout the pandemic and which are fairly easy to abide by,” stated Moran. “For us to get back to the new normal, they are all for our best interest.”

Moran reviewed the timeline of the pandemic from its first case in Wuhan, China and its escalation across various nations and globally as it continued to spread to the first case in the U.S. and Virginia. He described how early preparations included daily meetings, coordination with health partners, briefings and reviewing pandemic flu plans.

“The beginning of the pandemic was very sobering and we had to think through the best steps to respond to it,” said Moran.

Pandemic modeling depicted how certain demographics and living conditions in areas with heavier congestions such as New York City played a role in the fast spread of COVID-19. Moran said many were mistaken in believing that COVID-19 was no worse than the flu.

“Many compared this pandemic to the flu. We do have flu deaths in Virginia and they run at about .1%, but with COVID-19, it was about 10 to 20 times more and at a 1 to 2 percent estimated fatality rate,” he explained. “So, we knew early on that this was going to be more drastic.”

One of the primary goals of Moran and his colleagues was to prevent an influx in cases that would overwhelm the capacity of hospitals. Hospital alternative care facilities needed to be determined early on in case they were needed as cases increased rapidly.

“We ultimately determined not to go that route because we soon realized that Virginia was not going to have a surge,” he said. “The governor declared a state of emergency and stay at home order early on, so we did not experience a surge like many other states.”

Moran also credited Virginia with establishing a health equity group to be a part of the organized response early on. An innovative, first-of-its kind mechanism, the team monitored the progression of the virus and clearly established its disproportionate impact on black and brown communities.

“It became obvious to us that issues were surfacing in those areas and required proactive action through point prevalence testing to determine the spread by testing everyone. We have tested 22,000 of 30,000 inmates in our prison systems,” he explained.

The overall response to COVID-19 created a unique event demand for effective communication. This included the governor’s situation room updates, maintaining public confidence and keeping in contact with community organizations and faith-based groups.

Moran discussed how he and his colleagues continuously organized and reorganized, especially when assessing testing conditions and numbers to see how the virus was spreading and ultimately effecting our economy.

“Our numbers have really improved. Hospital and ICU rates have all been trending down and that is why the Governor felt safe with moving into phase 3,” said Moran.

The discussion around personal protective equipment (PPE) has been at the forefront of public discourse since the beginning of the pandemic. Moran discussed how Virginia has partnered with large distributors, supply chains and alternate sources to provide resources to those who need it. He added that the Virginia Department of Health (VDH) is working on how to distribute the vaccine once it becomes available.

The most recent concern is a potential second wave of COVID-19 surfacing in the midst of social protests in the community.

“As much as we embrace the peaceful protests, there is still a concern. Protests have entered day twenty-seven, but we have not yet seen an increase in the numbers in regards to the protest,” said Moran.

“We are not out of the woods because we do not yet have a vaccine. We have done a good job to comply and that’s credit to the people of Virginia and the Governor.”

The World Health Organization (WHO) officially declared COVID-19 a global pandemic on March 11, 2020. To date, there have been 9.2 million cases globally, 2.5 million cases in the United States and 61,000 cases in Virginia.