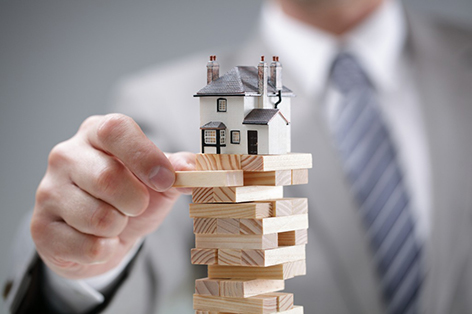 A man balancing a figurine of a house atop a precariously stacked stack of wooden blocks.

More than three in four Virginians (78%) see housing affordability as a problem in America today, and almost half (47%) see it as a very serious problem, according to a new statewide poll by the Center for Public Policy at Virginia Commonwealth University’s L. Douglas Wilder School of Government and Public Affairs.

However, when asked about housing affordability where they lived, respondents were less likely to see it as a problem (57%). And only one-third (33%) see it as a very serious problem. Likewise, respondents expressed a sense of security in their current housing situation, with 47% saying they felt very stable and secure and 33% saying they felt fairly stable and secure, the poll found.

The poll, conducted by landline and cellphone from June 9-19, is a random sample of 816 adults in Virginia with an overall margin of error of 3.43 percentage points.

The poll also found that about one-third (34%) of respondents said that they or someone they knew had been evicted, foreclosed upon, or lost their housing in the past five years. When asked about perceptions of future housing costs, the majority of respondents (69%) felt that the average rent in their area would increase. The majority (67%) also believe the average home price in their area will increase. Thirty percent of respondents said that they have had to take on an additional job, or work more at their current job, to make housing payments in the past three years.

“Even with the governor and General Assembly’s legislative response to data showing half of the top 10 large cities with the highest eviction rates are in Virginia, there’s a continued sense that Virginians see housing affordability as a real problem and are feeling the strain of housing costs,” said Fabrizio Fasulo, Ph.D., Director of the Wilder School’s Center for Urban and Regional Analysis.

Housing affordability is seen as a problem in the United States

When asked about housing affordability where they live, respondents in the South Central region were again more likely to say it was a very serious problem (47%), followed by those in Northern Virginia (41%). Respondents in the Northwest (55%), Tidewater (51%) and West (40%) regions were more likely to say affordability was not a problem in their area.

Majority of participants felt stable in their current housing situation

In addition to not seeing affordability as a problem in their area, a majority of respondents in the Tidewater, Northwest and West were more likely to say they felt very stable and secure in their current housing situations (56%, 52% and 50% respectively). Whereas South Central (41%) and Northern Virginia (40%) still had about four in 10 saying the same.

Sixty percent of respondents own their home, while 35% rent and 6% live with their parents or in some other arrangement. These numbers are comparable to percentages reported in a 2016 national survey on housing issues. When those who rent or live with parents (41% of the total sample) were asked whether they aspire to own a home, 70% said yes, 22% said no and 8% said they don’t know. This group also was asked about obstacles to buying a home. Twenty-two percent said there were limited options within their budget, 18% noted a poor credit history, 15% said they lacked the down payment and 11% noted existing debt being an obstacle.

Housing costs perceived to be on the rise

Even after the Governor signed seven pieces of legislation aimed at curbing evictions respondents were very supportive of additional policy measures. Three-fourths of Virginians (75%) supported changing laws to increase the length of time that renters have to pay past-due rent from seven to 14 days. And more than three-fourths of respondents (78%) would support legislation making it easier for tenants to withhold rent from landlords who don’t make necessary repairs in a specified amount of time. Only 12% opposed.

With regard to extending the time allowed to pay past due rent, support was consistently in the majority with all regions indicating more than 70% support, with the exception of the Northwest with 63%. Respondents in the Northwest were more likely to say they don’t know (22%). Those making less than $50,000 were more supportive (86%), compared to 79% of those with income of $50,000 to $100,000 and 70% of those with income over $100,000. Minorities (88%) were more supportive than whites (70%). Almost all Democrats (93%) were supportive of the change compared to 65% of independents and 58% of Republicans.

For potential legislation to make it easier to withhold rent for unaddressed repairs, regionally, Tidewater, Northern Virginia and South Central respondents supported (89%, 85% and 82% respectively). The Northwest and West had lower levels of support (67% and 57%) but significantly high levels of “don’t know” responses (22% and 28% respectively). An overwhelming 90% of those with income of $50,000 to $100,000 were supportive of the measure. Those making under $50,000 and over $100,000 still had high levels of support, 80% and 77% respectively. Minorities were more likely to support, 87% vs 74% of whites, and all party identifications were highly supportive, with Democrats showing the most support (85%) compared with 76% of Republicans and 70% of independents.

About the Wilder School and the Center for Public Policy

The L. Douglas Wilder School of Government and Public Affairs, named for the nation’s first African American elected governor, is a top-50 nationally ranked public affairs school. Located blocks from the state Capitol in Richmond, the school enrolls about 1,000 undergraduates and 400 graduate students in eight academic programs. The Wilder School’s 10,000-plus alumni work across the public, private and nonprofit sectors. Drawing on the wide-ranging expertise of Wilder School faculty, the Center for Public Policy's programs provide diverse public-facing services including leadership development and training, economic and policy impact analysis, survey insights and program evaluation to clients in state and local governments, nonprofit organizations, businesses and the general public across Virginia and beyond. For more, please visit wilder.vcu.edu/center-for-public-policy/.

About VCU and VCU Health

Virginia Commonwealth University is a major, urban public research university with national and international rankings in sponsored research. Located in downtown Richmond, VCU enrolls more than 31,000 students in 217 degree and certificate programs in the arts, sciences and humanities. Thirty-eight of the programs are unique in Virginia, many of them crossing the disciplines of VCU’s 11 schools and three colleges. The VCU Health brand represents the VCU health sciences academic programs, the VCU Massey Cancer Center and the VCU Health System, which comprises VCU Medical Center, Community Memorial Hospital, Children’s Hospital of Richmond at VCU, MCV Physicians and Virginia Premier Health Plan. For more, please visit vcu.edu and vcuhealth.org.